Red Hat’s Impact on Microsoft Azure: A Win for the Enterprise 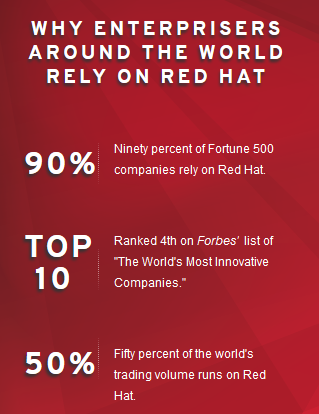 Scott Guthrie, Executive Vice President for Cloud and Enterprise Group at Microsoft, recently announced that Microsoft and Red Hat will partner to offer customers “more flexibility and choice.” In this opinion piece, I’ll help shed some light on what this means for Azure.

Microsoft’s renaming of Azure from “Windows Azure” to “Microsoft Azure” wasn’t just an excuse to change a logo and print some new business cards. It was a symbolic gesture to consumers of open source software that Azure was welcoming non-Windows users, too. Depending on which Microsoft presenter you listen to, somewhere between 20 and 40 percent of virtual machines running in Azure are installed with one of the Linux distributions.
Supported Linux distributions include multiple versions of the following:

Not only will you find Linux in Azure virtual machines, but there’s lots of open source throughout Azure:

In fact, most of the contents in the Azure Marketplace are from non-Microsoft sources, with many of the appliances being Linux based. As we’ve seen with Office, Microsoft doesn’t care what OS you’re using, as the money of a penguin hugger is as good as the money of a Windows user. And let’s get real here; the bigger the company, the more likely that company is to use both Windows and Linux for their core systems. Microsoft is even using Linux to power the Azure Cloud Switch!

Microsoft and Red Hat Tackling the Enterprise Together

Take another look at the above list of Linux distributions. One you-would-think-obvious-to-include distribution is missing: Red Hat. When I, a Windows user, think “Linux in business,” I think Red Hat and CentOS. Red Hat has a significant presence in business, with the company claiming on their site that 90 percent of Fortune 500 companies use Red Hat.

Microsoft claims that 80 percent of the same Fortune 500 companies are using Microsoft’s cloud, which might be a marketing abstraction that includes all of Microsoft’s services, and not just Azure. This means that Microsoft and Red Hat share a significant segment of the Fortune 500 market. That’s a lot of money to waste if both companies choose not to cooperate. Doesn’t a rising tide lifts all boats?
It’s hard to say why Red Hat has been missing until now, but times have changed. This is Microsoft 3.0, and Satya Nadella’s Microsoft is appearing in Apple product launches, Salesforce keynotes, and has truly integrated open source development throughout the organization – the Linux engineers aren’t shuttered away in some leaky basement off the Redmond campus anymore.

It was inevitable, with so many shared customers and so much possible shared earning potential, that Microsoft and Red Hat should make nice and announce a partnership for in-cloud and on-premises solutions. The following programs were announced:

This is great news for current and potential customers of both companies.