This week, Microsoft is at the Open Compute Project Summit and the company is going public with Denali, a next-generation spec for solid-state storage. In addition, they are also revealing details about Cerberus, an additional security layer for server hardware.

Microsoft argues that while on-premises storage paradigms have performed well, that model has not translated well to the cloud. And seeing that Microsoft is one of the largest cloud providers on the planet, they likely have unique insight into this segment.

In an effort to make flash storage targeted specifically for cloud-based workloads, the company is announcing Project Denali which standardizes the SSD firmware interfaces by disaggregating the functionality for software-defined data layout and media management. Microsoft is working with CNEX labs for this standardization process and they believe that by implementing this standard, customers will be able to achieve better performance in the cloud while reducing the cost that comes with cloud-scale.

This new standard is an evolution of the Open Channel that defines the roles of SSD against that of the standard interface. In addition to CNEX Labs, Samsung, Intel, and several others are already onboard with this new standard. 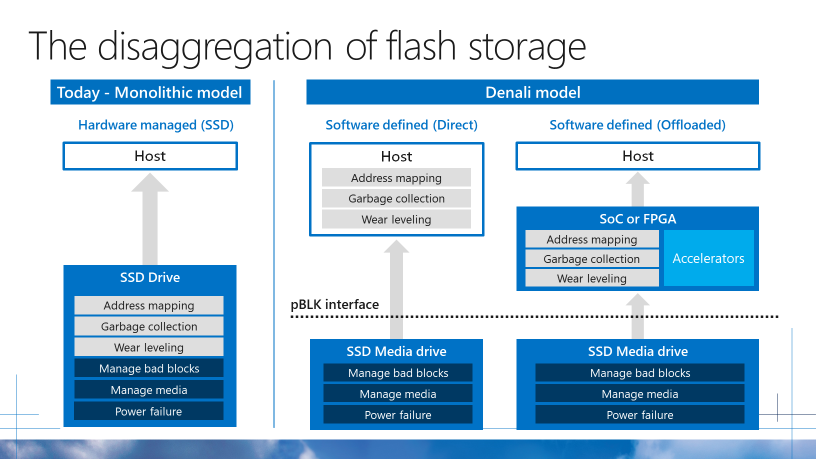 One important aspect of Denali is that it allows for support of FPGAs on the host side, and considering that Microsoft is a big fan of these field-programmable-gate arrays for its data centers, this would be a big win for them. In addition, Microsoft is a large buyer of SSDs for its cloud services which will help put considerable weight behind this standard.

Also discussed today is Project Cerberus which the company aims to create an open industry standard for platform security. Cerberus is a security co-processor that establishes a root of trust in itself for all of the hardware devices on a computing platform that can protect against internal and external attacks.

Cerberus is based around a cryptographic microcontroller running trusted code which intercepts accesses from the host to flash over the SPI bus (where the firmware is located), so it can continuously assess and attest these accesses to ensure firmware integrity and hence protect against unauthorized access and malicious updates.

Microsoft has been frequently sharing its data center designs and process with the community as a way to help advance the industry. While some may see this as the company is giving away trade-secrets, if you are pushing the industry forward, then you are, by its very nature, already the leader.

Cerberus and Denali show where Microsoft is headed with their data center designs and how they plan to further secure workloads on their hardware. And considering the company is dumping billions into new data centers over the next couple of years, expect to hear more about how this technology will be implemented into its cloud services portfolio.