A regular expression is a way of using a pattern to describe some piece of data. Granted, coming up with the pattern can be time consuming. Let’s see if our string challenge can help shed some light on the subject. If you recall, I am starting with a string, presumably from a log.

The goal is to extract O’Hicks, Jeffery(X.) from the string. I’ve intentionally modified my name to throw in a different character because you might face something similar. The examples I am going to show you should also work for simpler strings as well. If you know for a fact what your data will look like, you might even be able to get by with simpler patterns. But enough chat. The simple way to even test if there is a matching pattern is with the –Match operator.

The stuff to the left of the –match operator is the regular expression pattern. Here’s how it breaks down, and it is case-senstive:

The –match operator will return true or false. If true, you can look at the built-in $matches variable to see what matched.

This is similar to what I came up with splitting in the previous article.

As before, I can now parse out the relevant part of the string.

The thing about regular expression patterns is that they float to match anywhere in the string, unless you use anchors. You can also fine-tune your pattern:

There are a few additions here.

As you can see, now I have exactly the result I need without any additional parsing.

I can get the value from $matches.values. Still with me? Let’s spin your head a bit more, and let me show you the REGEX object. This object starts out as a regular expression pattern.

This is a variation on what I used before.

The REGEX object gives you a bit more control. Pipe $rx to Get-Member and you should see something like this:

If you merely want to test and see if the pattern matches in the string, then you can do this:

You can also use the Match method: 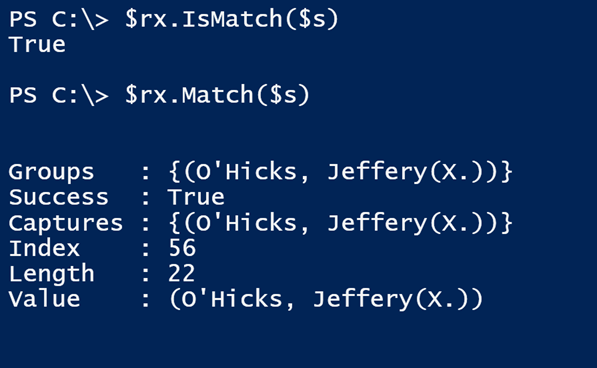 As I did with –Match, I can get the value and parse it.

As you can see it all comes down to the pattern.

Since I’ve already found a pattern that matches exactly what I want without any additional parsing, I might as well use that.

Or if you want to show off your head-spinning PowerShell skills, try this one-liner: