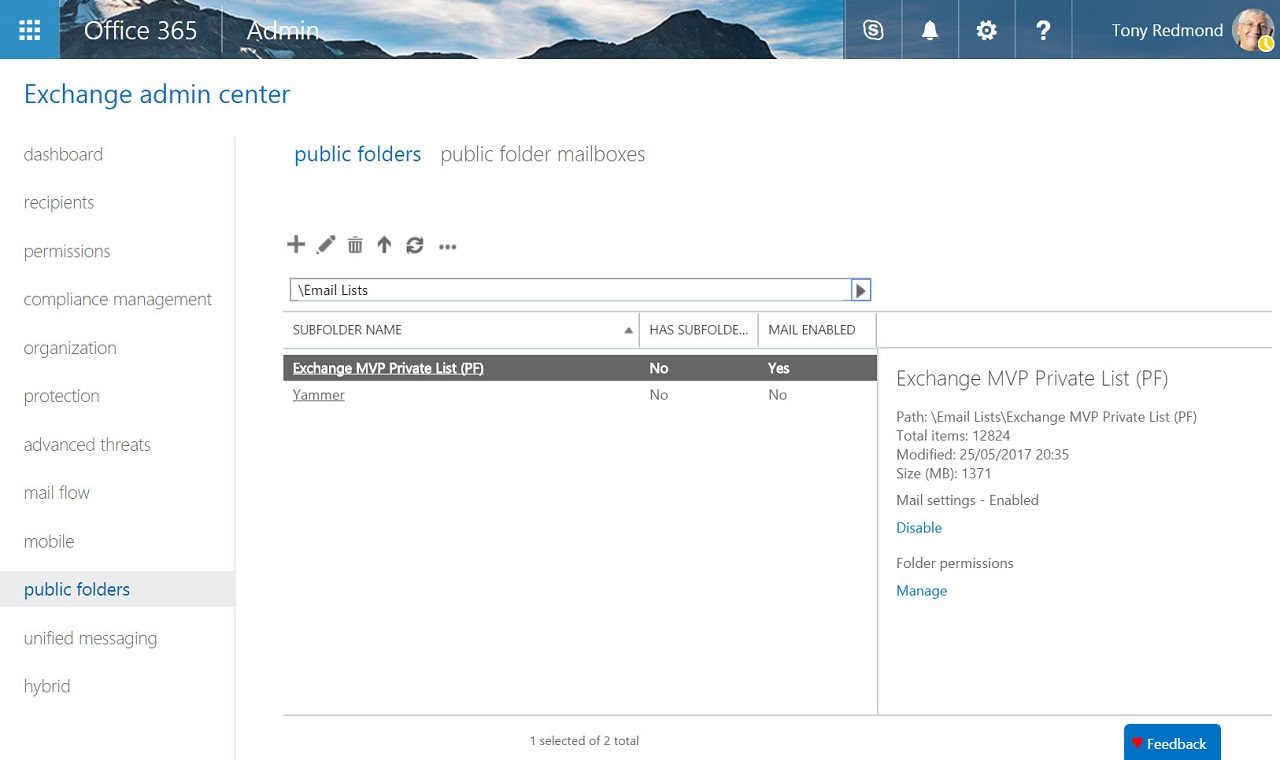 Microsoft eventually solved the problem and introduced the ability to move modern public folders from Exchange 2013 and 2016 servers to Exchange Online in March 2017. All you need is to make sure that you run the latest cumulative updates on your on-premises servers and follow Microsoft’s directions to flow data to the cloud. The process is manual and tiresome and involves manipulation of CSV files, but it does work.

Customers face a fundamental decision to move to the cloud or stay on-premises. Relatively few customers would incur the cost of upgrading to Exchange 2016 and then decide to move to Exchange Online. That doesn’t make sense. Once customers take a decision about the platform to use, it is reasonable to assume that they want to use modern public folders on their chosen platform.

Microsoft knows that those who move to Office 365 migrate mailboxes first. Public folders are typically handled last in a migration. This is not a big problem because cloud mailboxes can access on-premises public folders. Overall, it is unsurprising that Microsoft decided to delay introducing migration tools to move modern public folders from on-premises to the cloud.

Conspiracy theorists will say that Microsoft’s real goal is to convince customers to move public folders to SharePoint or another repository and therefore they did not want to support migration of modern public folders to the cloud. Although a nice conspiracy always drives debate on social media, there’s really nothing in it. The idea gained currency in the Exchange 2007/SharePoint 2007 era but was never more than idle chatter. No migration tools were produced and no serious effort was put into figuring out all the complexities of moving all the various kinds of data found in public folders to SharePoint entities.

Three examples that can handle modern public folders are BitTitan MigrationWiz, Binary Tree E2E Complete, CodeTwo Office 365 Migration, and Quadrotech Public Folder Shuttle. These products can move the data found in public folders to various destinations in the cloud including shared mailboxes (which are free in terms of licensing). Public Folder Shuttle also includes Office 365 Groups as a destination, which is a good choice if you use public folders for collaboration rather than a convenient dumping ground for shared email. If you do, a shared mailbox is a better option.

Interestingly, before doing any migration, Public Folder Shuttle analyzes the public folder hierarchy and data to determine the best destination for different folders. Experience gained from analyzing many public folder hierarchies reveals that relatively few public folders (probably 10% or less) are good candidates to be transformed into Office 365 Groups. Suitable folders are highly active, mail-enabled, and hold both email items and documents – or just documents.

Another interesting fact gleaned by analyzing public folder hierarchies is that it is common to discover that a large percentage of public folders have not been used recently. These folders are candidates to be pruned and discarded rather than being moved to the cloud.

The cost of commercial solutions is outweighed by the automation and flexibility of the toolsets. Of course, you can do-it-yourself by exporting public folder content to PSTs and importing the data into whatever target you think is reasonable. Such an approach is only useful when you have only a small number of folders to move.

I have often referred to public folders as the “cockroaches of Exchange” because of their ability to survive for so long despite so little tender loving care from Microsoft. The nice thing is that we now have some real opportunities to move public folders to modern collaboration platform. Not Teams (yet, if ever), but definitely Office 365 Groups.