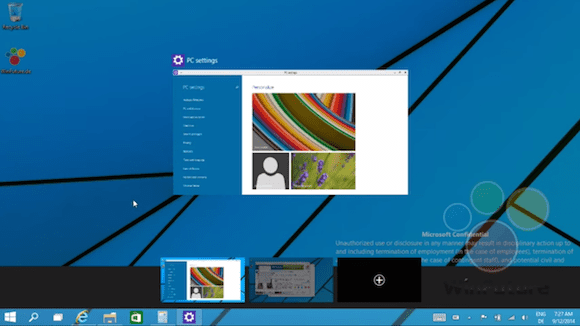 It’s been a busy week or two for Windows 9 news. Last week we caught our first glimpse of the Windows 9 Technical Preview thanks to some leaked early Windows 9 build screenshots, and Microsoft has officially sent out press event invites for a September 30th Windows 9 preview event.

Now even more details about Windows 9 have hit the web: German IT website WinFuture was one of the first sites on the web to post those aforementioned screenshots, and they’ve followed that up by releasing four videos that show the leaked build in action.

One of the most eagerly-awaited new features in Windows 9 is virtual desktops, depicted in this screen grab from a video posted by German IT website WinFuture. (Image: WinFuture)

The four videos show the new Windows 9 Start menu, the new virtual desktop feature, tweaked Windows live tiles, and the new Windows 9 notification feature. I’ve embedded all four of those videos below, and I’ve added a few sentences to each describing what we’re seeing in additional detail. I’d also encourage you to bookmark and check out the WinFuture YouTube channel, which is where all of these videos were uploaded to.

Arguably the most anticipated new feature in Windows 9 is the revamped Start menu, which merges the traditional functionality of the venerable Start menu — as it behaves in Windows 7, Windows Vista, and Windows XP, and earlier versions of Windows — with the live tiles and modern apps introduced in Windows 8. This video does a good job of illustrating the new Start menu functionality, and demonstrates how you can add, resize, and move live tiles in the expanded section of the menu. Of particular note is the new shut-down icon and functionality in the menu itself, which should be a godsend for users who were perplexed by the Byzantine methods needed to shut down the OS in the first release of Windows 8, which was so confusing is created demand for a plethora of “How to Shut Down Windows 8” articles.

One sleeper feature of Windows 8 appears to be virtual desktop, which might also be referred to as multi-desktop. This feature has been rumored to land in Windows 9 for some time, but the video shows the impressibly slick functionality of the feature. Multiple desktops can be added with just a few mouse-clicks, and toggling between them is made easier by the addition of a virtual desktops icon inserted in the Windows task bar. As my friends and co-workers can attest, my desktops tend to get cluttered with icons, so I’m looking forward to getting some additional organizational help in this area.

This video overlaps a bit with the aforementioned video on the new Windows 9 Start menu, but I’d suggest that you watch this one for even more insight into how the new Start menu will work with the Live tiles concept introduced in Windows 8. It seems like a pretty smart implementation from what I can tell in the video, which gives me the impression that Microsoft has burned an oil tanker worth of midnight oil to get the Start menu right. Billions of dollars worth of IT upgrade capital were probably held up by the removal of the Start menu from the initial release of Windows 8, a blunder that has to rank up there with New Coke, the Ford Edsel, and the Microsoft Zune as one of the most epic failures of product design in modern memory.

Last but not least, the new notification center in Windows 9 promises to de-clutter and streamline all of those notifications we all receive from text messages, Twitter, Facebook, and a myriad of other apps and services. It’s a welcome new feature, but Petri readers familiar with how notifications work in iOS and Android will see that Microsoft is playing a bit of catchup in this area.

So do these Windows 9 Technical Preview videos give you a better idea of what Windows 9 will bring to the table? I’d love to hear what you think, so please drop me an email with your thoughts, add a comment to this blog post, or contact me on Twitter or Google+. You can also catch up on my posts in the Petri IT Knowledgebase forums.