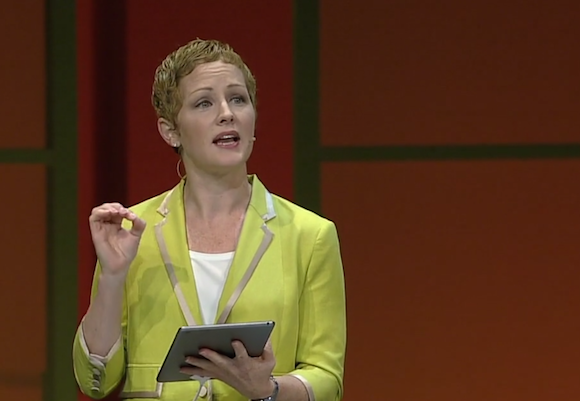 We recently had the opportunity to sit down with Julia White, the General Manager for the Office division at Microsoft. We asked her about the growth and adoption of Office 365, the new Office 365 iPad app, and about upcoming Office 365 features like Office Graph, Power BI, and the Codename Oslo application.

Microsoft officials have recently stated that Office 365 is the fastest growing Microsoft business ever. Since Microsoft hasn’t provided exact sales figures or subscriber data, this claim is difficult to independently verify. That said; there is a fair amount of evidence that Office 365 is gaining traction. Feedback from the Petri IT Knowledgebase author pool, increased interest in Office 365 based on our reader surveys, and reports from corporate customers and Microsoft partners that Office 365 is being adopted rapidly indicate a growing acceptance of Microsoft’s cloud based productivity suite.

I sat down with Julia at Microsoft TechEd 2014 for a 1 on 1 interview. I asked her about those sales figures and sought insights on some other products in the Microsoft portfolio associated with Office 365. What follows is an edited transcript of that interview. We’ve broken it into two parts due to its length.

Jeff James: My first question is about Office 365 growth and adoption. Based on what we’ve heard from Petri readers, authors, and other people in the industry, it looks like Office 365 is really taking off. At a recent Microsoft press event Microsoft Corporate Vice President for Cloud and Enterprise, Brad Anderson, said that “Office 365 is the fastest growing business in the history of Microsoft.”

Maybe you could elaborate on that, and maybe there are a couple of data points you could throw out?

Jeff: Did you see any sort of uptick in the numbers around the time you announced Office for the iPad?

Reasons to Move to Office 365

Jeff: What advice would you give to someone who hasn’t embraced Office 365 yet? What would be the top three, most compelling reasons why someone should move to Office 365?

Julia: On the business side?

Julia: There’s a positive and then there’s a, “C’mon man! You’re going to get left behind!” [laughter…]

On that front, we recently conducted some research where we went back and talked to Microsoft Exchange admins in organizations who’d been on Exchange Online for two or more years.

Some admins may think, “Gosh, is my job going to be changing? Am I going to get fired? Is it going to be eliminated?”

We went back and talked to all these organizations that have been on Exchange Online for more than two years, and asked what happened to their email team. We found out that a hundred percent of them are still there. There’s a quote from someone we talked to who said, “This is the best thing that’s ever happened to my career. I am now spending time adding value to my business, not patching Exchange server. I don’t have to get up in the middle of the night, God bless them!” [laughs…]

Reason #1: Your Job is Going to Get Better

Julia: No longer are they being paged in the night to reboot Exchange servers, they’re saying, “That’s not my problem, and now I’m actually focused on how to help users take advantage of the skills they have, I can roll out things like archiving and other things they I never had time to do.”

There’s this wonderful work we do with Aston Martin who came to us early on as an Office 365 customer. This new CIO came in. He’s like, “We’re just a bunch of back-end wonks. We’re not helping the business do more. We’re not helping sales. We’re just keeping stuff alive. I want to change that.” He was great.

He partnered with us, got everything moved to Office 365 and said, “Now I have a group of strategic business IT people who can go add value to the business.”

That’s just a real-world example of how that worked. The job of an IT professional is going to get better.

The second reason would be the improved productivity of the people in your organization. The HR costs are the number one thing in the organization. All of a sudden those people are going to get a lot more productive.

Picking a favorite example, using OneDrive for Business allows workers to say, “Now I can work on all my different devices. Now, I’m not strapped to my single PC that’s connected to my desk at work, so I can be productive wherever I’m at.”

When I think about on-prem email, the average email size is one (1) gig. With Office 365 you have 50 gigs when you move to the cloud so you’re no longer spending time clearing out your inboxes. Dumb stuff like that burns high value productivity time instead of getting your work done.

The third reason would be the tools that you’ll now have available to run a smarter business.  Power BI, which we showed, is only available with Office 365. That Office Graph and the cool, personal, relevance-based model experiences, that stuff only works in the cloud. In theory, we could ship the code for Office Graph (and put it on-prem) but every organization would need to prop up 100 servers and update it every single day based on the algorithms. You’re not going to have to do that. You’re going to be running a much smarter business and a much more powerful business. Your competition is going to be doing that. If you’re not, you have fewer arrows in your quiver essentially to be competitive and stay ahead of what’s happening in the world.

So to recap: One, your job is going to get better. Two, your organization is going to be more productive.  And three, you’re going to suddenly get the tools to run a smarter business. 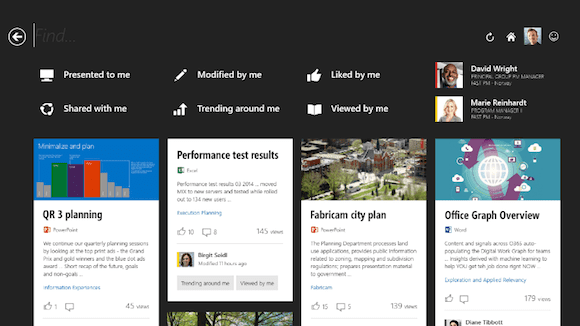 Office Graph is an upcoming Office 365 feature that will make it easier to search for and find information based on your social connections. (Source: Microsoft)

Jeff: That’s good. What other advice would you give someone who hasn’t gone to Office 365? Are there any other specific use cases that illustrate the advantages you get from going to Office 365?

Julia: Any of the different capabilities. If you just want Lync Online, suddenly you can do real-time communication in a much easier way. Interestingly with Lync, the largest usage of Lync is one-to-one, having a meeting one-on-one with someone.

People think, “Web conferences, big meetings.” No, it’s actually this, “Hey, I want to call you. You’re in some other building, or you’re across the country. I just want to share my desktop with you and show you what I’m working on.”

That ability is an example. You could pick that with Yammer, enterprise social. I’d say, don’t try and swallow the whole pill in terms of deploying everything right now. Start with one, get your feet wet, and see how it goes

OneDrive for Business seems to be quickly becoming the first place people may try Office 365 because of the instant user benefit. It doesn’t come with any big data migration like you get with email and it solves a real need right now. People have content who-knows-where, spread all over, in certain places that aren’t managed. An employee leaves. They take all their data with them. OneDrive for Business is a great place to start, and Lync, too. Again, it doesn’t have big data migration with it like email, but I get that real time communication which a lot of businesses still don’t have, that kind of thing. 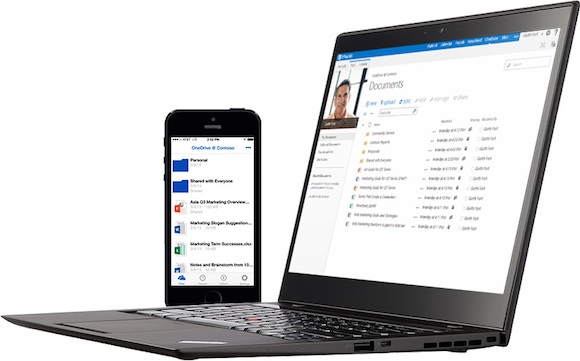 Interestingly enough, two years ago, all everyone ever talked about was starting with email. That was, “The thing to do.” Both we, and even Gartner, who I work with closely, say, “Yeah. I think that’s your second step, not your first step.”

Start with some of these other workloads and give yourself time to get comfortable with going through the security, the data sovereignty, and things that come with 25 years of email you got to migrate, whatever it is. That’s a bigger task to bite off, so don’t start with that one, actually get comfortable, and ease your way into that one.

Jeff: One complaint I’ve heard from readers who are looking at Office 365 is that it historically has been a little confusing for them to choose from all the different pricing plans and all the different subscription options for Office 365. Any advice you would give them specifically when it comes to choosing the right configuration for their needs?

Julia: The closest equivalent would be to your cable package. You can have the A, B, or C, or the premiums, super premium, double premium, [laughs] all those kind of packages. 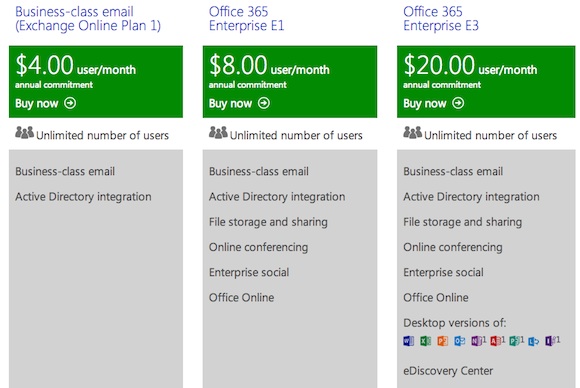 Julia: Premium, definitely. [laughs] There’s going to be our suite packages. 97 percent of people that like one of those suites, it makes sense. We’ve thought deeply about, “are these the right combination of things?”

There’s what you buy, and then there’s separate. Let’s say I buy our E3 suite. That’s got a lot of good stuff in it. That doesn’t mean on day one I deploy everything. Day one, I’ll start with OneDrive, and then I want to add Lync next month. Then, I’m going to wait three months, and I’ll do Exchange, so there’s the purchase, and then there’s deployment.

From a purchase perspective, financially and economically, your best deal is with one of these suites. They’re screaming deals. Then if you’re, “Nope, no. Just give me only Exchange”, we have that too. If you lift it beyond the suites, you can buy every single thing we have individually, because we have a billion people who use Office.

They all wanted their own options. We’re, “OK, if you want to open the hood and you want to buy just the bolt, you can do that.” But that’s not typically what is most economical for people. Then it gets complicated because you don’t know which flavor. The suites are what you really want, the whole package.

We will be posting the second part of our interview with Julia White early next week. In that post we’ll touch on the unfortunately-named predecessor to Office 365 called the Business Productivity Online Suite (BPOS), the state of Microsoft’s internal development efforts, and what the Microsoft culture is like now that new Microsoft CEO Satya Nadella is at the helm.