Office 365 has quickly become a big business for Microsoft, with Microsoft Corporate Vice President Brad Anderson recently stating that “Office 365 is the fastest-growing business in Microsoft history.” That’s a bold claim to make, but it’s clear that Office 365 is having a big impact on the consumer and business ends of the market.

As quickly as Office 365 is being adopted, one of the most common complaints I’ve heard from readers about Office 365 is that the sheer number of subscription plans and options can be overwhelming. Microsoft has streamlined and improved their messaging and marketing on this point, and the current Office 365 subscription landscape is much easier to understand than it was 3 years ago when Office 365 first launched.

Microsoft has a number of variants of Office 365 available for home and personal use. Although technically not branded as an Office 365 product, Office Online is a free, online-only offering that I’ve included here as it is included for free in all Office 365 subscription plans. Office 365 Personal and Office 365 Home round out the options for personal and home usage.

If you’re looking for an online-only, web accessible version of the most popular Microsoft Office applications for personal use, Office Online is for you. All you need is a free Microsoft Account and you can start using the online versions of Microsoft Word, Microsoft Excel, and Microsoft PowerPoint. Documents are saved in Microsoft OneDrive. Those documents can also be opened in client versions of traditional Office apps. Like Google Apps, Office Online also offers online document collaboration with people you’ve shared documents with. Visit the Office Online website for more information.

The next step up from Office online is Office 365 Personal. You can still use Office Online for all of your online editing needs, but Office 365 personal also include the ability to install the client versions of Microsoft Excel, Word, OneNote, Outlook, and PowerPoint on one Mac or PC, as well as on one iPad or Windows tablet. Pricing is $6.99 for a single user a month. It’s important to note that the licensing is only for a single user. There are better solutions available for families and small businesses. Visit the Office 365 Personal website for more information.

Arguably the best deal in the home category of Office 365 subscriptions is Office 365 Home. This subscription plan is a great deal for families since it allows 5 users to install client versions of Microsoft Office on their Macs or PCs, as well as 1 iPad or Windows tablet. My oldest son is heading off to college in the autumn so an Office 365 Home subscription plan would be perfect for that use case and I have more than enough users remaining for my other children to have their own accounts as well.  Visit the Office 365 Home website for more information.

Update: (July 9, 2014) Just before the Microsoft Worldwide Partner Conference 2014, Microsoft announced via the official Office blog that they were altering their Office 365 Business plans, and the changes would take effect on October 1st, 2014.

Here’s a chart from Microsoft showing the details of the new Office 365 Business plans:

If you’re a small business with less than 25 employees, Office 365 Business is likely the most appropriate plan for you. One caveat is that unlike the Small Business Premium and Midsize editions of Office 365, this subscription plan does not include the ability to install the client versions of Microsoft Word, Excel, PowerPoint, OneNote, and Outlook. And it also doesn’t allow you to edit and save documents using the popular Microsoft Office for iPad. Microsoft is clearly aiming at Google Apps with this subscription plan as it duplicates many of the features found in Google Apps for Business. You’ll be getting web-based email, use of the Office Online web-only apps, and file storage using Microsoft OneDrive. Visit the Office 365 Small Business website for more information.

The most full-featured Office 365 subscription plan in the SMB tier is Office 365 Midsize Business. From a feature perspective this plan offers the exact same feature set as Office 365 Small Business Premium, with one very important addition: Active Directory integration. AD integration makes it easy to manage user access via permissions and credentials and is likely a must for SMBs that demand more control of which users are accessing what.

Depending on your Microsoft licensing situation, I can see the appeal of this plan for branch offices. Rather than having to resort to having a remote IT professional on site, this plan allows integration with a larger corporate AD infrastructure, fully-hosted email, and all of the client (and web-equivalent) Office apps that users have come to know and love. Visit the Office 365 Midsize Business website for more information. 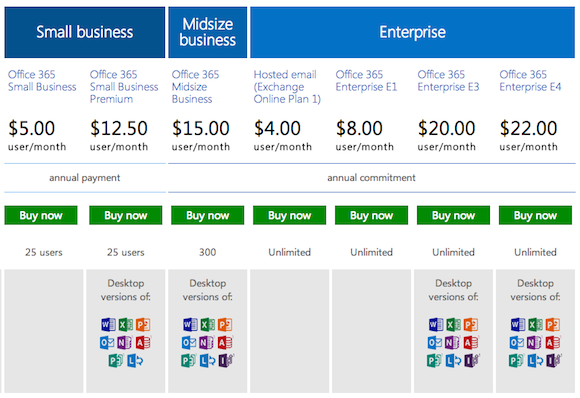 Office 365 plans in the Enterprise category are the most fully-featured (and therefore most expensive) plans available but they give larger enterprise that may have more excessive compliance and regulatory concerns a solution that they may be more comfortable with adopting than competitive offerings, especially if they already have a large on-premise AD infrastructure.

The first offering in Microsoft Office 365 enterprise subscription tier is a straightforward one: Hosted email, aka ‘Exchange Online Plan 1.’ This service provides exactly what it says it does: It serves up fully-hosted Microsoft Exchange along with Office Online and full Active Directory integration. There are many larger enterprises that just don’t want (or need) to run mail servers on-premises anymore. This plan gives them the option to effectively outsource that IT function to Microsoft.

This subscription plan might not be a valid option for IT departments with stringent regulatory and compliance concerns that may preclude hosted email, but it’s an option for many. This is also an area where Microsoft ends up competing directly with their Exchange hosting provider partners, and the comparison may not be good one for those partners. Derrick Lodarz over at Betanews has written a great comparison of Office 365 hosted email plan and traditional hosted Exchange, and his assessment is hard to argue with. Visit the Office 365 Hosted email (Exchange Online Plan 1) website for more information.

At the top of the enterprise plan heap is Office 365 Enterprise 4, which offers all of the features and services found in Enterprise E3, as well as integration with an existing Lync Server 2013 installation and the full client editions of  Microsoft Word, Excel, PowerPoint, Ouutlook, OneNote, Publisher, Lync, Access, and InfoPath. Visit the Office 365 Enterprise E4 website for more information.

So have you already adopted Office 365? Send me an email with your thoughts on the topic, or you can also contact me on Twitter or Google+. You can also catch up on my posts in the Petri IT Knowledgebase forums.