In this post, I will explain some of the language that is used to specify and size Azure SQL, the database-as-a-service offering from Microsoft Azure.

There are two ways that you can deploy Azure SQL in Microsoft Azure. The first, and the most common one that I see, is the Single database option. When you select a Single database, Azure deploys 1 database that runs in it’s on bubble of performance. The database has several ways to size it’s performance, but the most commonly quoted and confusing one is Database Transaction Units (DTUs).
Every database in Azure SQL offers a maximum number of DTUs. But what the heck are these things? I’ve heard of IOPS, virtual CPUs, RAM, and so on, but DTU was a new one to me.
Microsoft describes DTUs as being:

The goal of DTUs is to simplify the planning of performance for a database. There’s a good chance that you’ve had a part in this conversation before:

And in the end, either too many or too few resources are provided and no one is happy. DTUs take the metrics that determine the performance of a database and mush them together in a measure that we can use to abstract and compare performance. I have no idea what a “brake horsepower” is, but I know that a car with 500BHP is probably a lot more fun than one with 100BHP. The same goes for databases; the S7 database with 800DTUs offers a performance baseline that is 40 times more than an S1 database with 20DTUs.

When you deploy an Azure SQL single database, you will pick one of the sizes. The main, but not the only, performance limits of that size will be DTUs. The database will be able to scale up to the documented DTU limit. If a database hits that limit:

Microsoft provides a number of tools/methods to help you understand the DTU requirements of existing SQL Server databases. Using this information you can correctly size and Azure SQL single database before a migration.

A larger organization might have a number of databases that are: 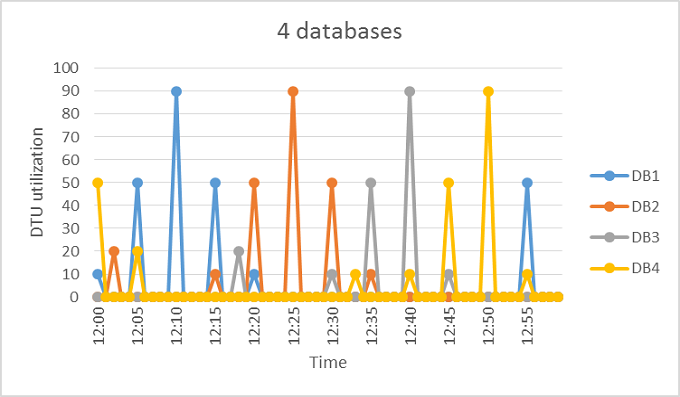 Databases in an Elastic Pool Sharing the eDTUs of that Pool [Image Credit: Microsoft]

You might decide that some databases need a change in plan and this is possible: