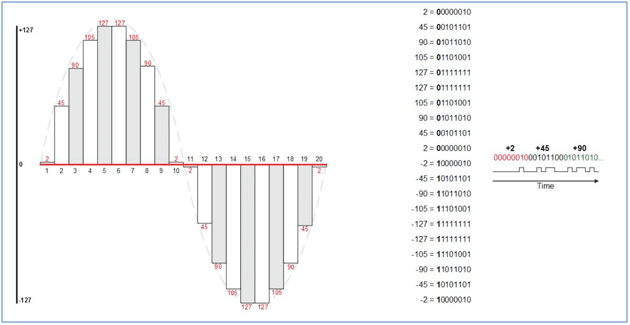 The implementation of Voice over IP (VoIP) has become more common as an organizational alternative to traditional voice services. This article reviews the basic concepts of voice operations, and provides a base of knowledge for deploying and operating these technologies. The CCNA Voice certification provides the candidate an associate level of knowledge in several common voice implementations. These implementations can include devices like IP phones, gateways and gatekeepers, as well as voice concept basics like call control and QoS. The CCNA Voice certification holder holds such titles as Voice Administrator, Voice Technician or Telecom Analyst, and has the ability to administer these types of voice implementations.

Sampling takes a continuous signal and converts it into a discrete signal; quantization is then used to assign a value representing the sample. The amount of values available depends on the quantization type used; typically, in voice communications, 8-bit quantization is used. The standard codec that is used on voice networks is G.711 which samples an 8-bit signal (via quantization) at 8000 times a second. Signals are digitally represented by 256 values from -127 (11111111) through 127 (01111111) with the first digit representing value polarity. An example of this is shown in Figure 1. 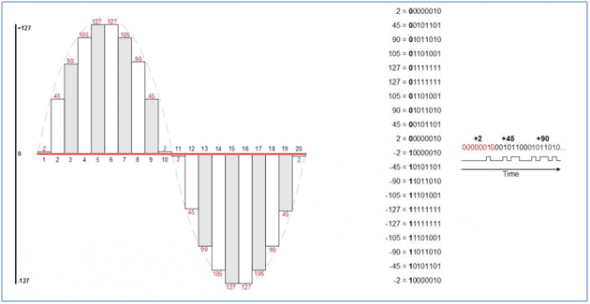 There are three major types of analog interface, these include:

E&M is an interface that is traditionally used to connect between voice switch devices. There are five different types of E&M signaling, with Type 1 being the most common in the U.S.

There are two main voice digital interfaces, Basic Rate Interface (BRI) and Primary Rate Interface (PRI). A BRI provides up to 2 channels of voice with a smaller signaling channel. A PRI provides up to 23 channels of voice with an additional 24th channel which is used for signaling. Both of these interfaces are used more commonly in voice implementations as a replacement for an E&M analog interface. The use of BRI and PRI is also common when delivering voice to customer premises.

A call leg is a commonly used term to reference a logical connection between two devices. Depending on the number of devices that are used to connect a voice connection from source to destination, the number of call legs can get quite high.

A dial peer on a Cisco device refers to a physical configuration of a call leg. There are different dial peer types including a POTS dial peer and a Voice-network dial peer (commonly VoIP).  Figure 2 shows a common example of dial peer implementation.

A codec is a process of coding and decoding a signal.  Typically, a voice codec is used to compress the voice signal into a specific bit-rate in order to be transferred between devices. The most commonly used codec is G.711 which is associated with uncompressed (mostly) voice. Table 1 shows a list of the most commonly used modern codecs.

The numbering plan is simply a plan that is followed in the allocation of phone numbers. Most people are familiar with this assignment of various area codes and prefixes throughout the country. In North America, this plan is called the North American Numbering Plan (NANP). This plan defines the use of a 10 digit phone number which includes a three digit Numbering Plan Area (NPA) that is used to identify the area (also called the area code), the NXX that is used to identify the central office and a four digit station code which identifies the specific end device.

The overview of voice operations covered in this article should help in understanding the fundamental concepts that are part of a voice certification. Information about the topics covered when studying for the CCNA Voice Certification can be found here: https://learningnetwork.cisco.com/docs/DOC-8279 (login required).