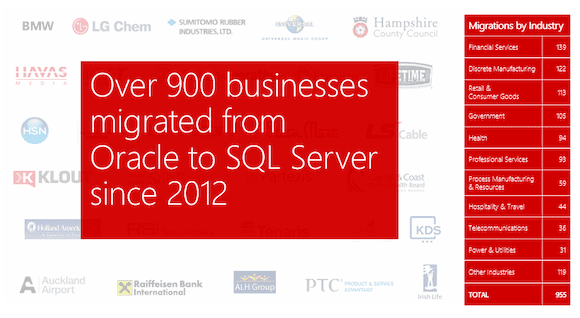 Microsoft announced early this morning that SQL Server 2014 has been released to manufacturing (RTM), and that general availability (GA) for the product — including in the form of a Windows Azure virtual machine image — will be on April 1st. That’s not a typo: Microsoft has had several product releases and/or important software milestones land on April Fool’s day in the past without issue, so the company isn’t phased by the association.

Microsoft has invested a lot of time and effort in taking advantage of cloud services with this latest release of SQL Server, and intends to give database and system administrators the tools they need to map their own needs with the appropriate database solution. This could include backing up important SQL data to an Azure cloud on a regular basis, or putting tier 2 or tier 3 applications into Azure SQL virtual machines. “We’re the only database vendor that offers customers all three deployment options,” said Microsoft’s Tracy Daugherty, the principal group program manager lead for the SQL Server team. “Whether their needs are on-premise, in the cloud, and in between, only our solutions connect the dots along that path. We’re not in the business of telling them where [to deploy SQL Server]…they all have their own variations and purposes.”

During a press event just prior to the SQL Server 2014 RTM news, Daughterty argued that Microsoft — unlike database competitor Oracle — doesn’t charge for many program options, and also stressed that Microsoft has been making gains against Oracle by switching more than “…900 businesses from Oracle to SQL Server since 2012.” Note: I’m looking for independent confirmation of that figure — which doesn’t include data on how many companies may have switched from SQL Server to Oracle in the same timeframe — so I’ll update this article with additional info when I come across it.

Microsoft claims that it is continuing to take database business from Oracle (Source: Tracy Daugherty, Microsoft)

As part of that push to let DBAs manage and deploy SQL Server however they want to, Microsoft will also release a free backup to Windows Azure tool timed with the availability of the SQL Server 2014 that will allow DBAs to easily backup SQL data into Windows Azure.

The Promise of In-Memory OLTP

SQL Server 2014 boasts a raft of new features, but Microsoft is most proud of their efforts around in-memory online transaction processing (OLTP). The dramatic drop in RAM prices over the years (see slide screen grab, below) has resulted in workstations and servers that can easily fitted with hundreds (if not thousands) of gigabytes of memory. In-Memory OLTP in SQL Server 2014 introduces allows DBAs to move their most heavily-accessed data (“hot data”) into memory for faster processing. This can result in significant transaction speeds, which can significantly improve the experience for end-users who consume the data and DBAs that have to manage it. The current maximum size of that hot data in memory is limited to 256GB, but Kevin Liu, the principal lead program manager on the SQL Server engine team, said that “…we expect to dramatically increase the size of that hot data [from 256GB] in the next release of SQL Server.” So as impressive as In-Memory OLTP is now, it’s clear that Microsoft intends to enhance that feature even further in the future. 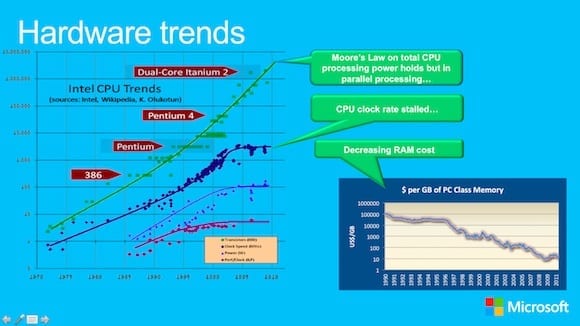 For more information on the SQL Server 2014 release you can check out a blog post on the news by Quentin Clark, Microsoft’s corporate vice president of the data platform group, and you can sign-up in advance for news of the release. Microsoft also has plans to celebrate the SQL Server 2014 launch in a more celebratory way via a “Accelerate your Insights” event that will take place on April 15th. Which happens to be tax day here in the United States. First Microsoft uses April 1st as SQL Server 2014 GA, and now this? Microsoft definitely has a thing for memorable dates with this SQL Server launch.

So will the new in-memory OLTP and hybrid cloud features convince you to take the plunge into upgrading to SQL Server 2014? Drop me an email with your thoughts, or tell me what you think via my Twitter or Google+ pages, which are linked below.