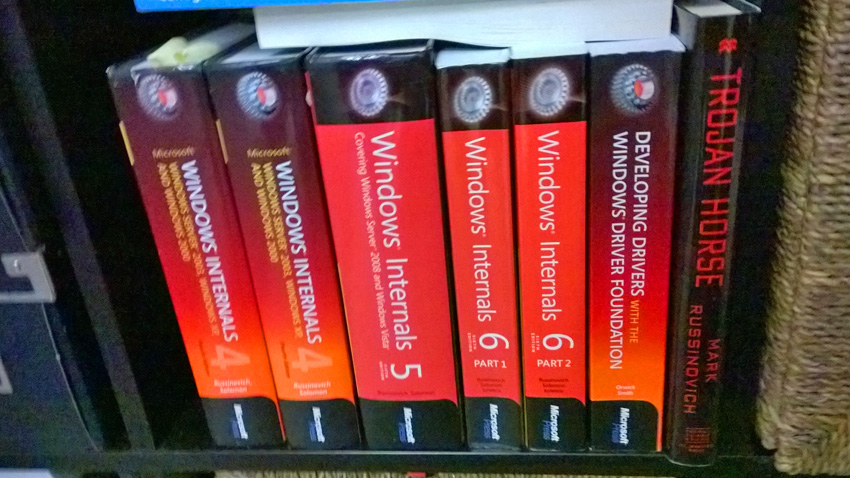 Your basic “All Russinovich, all the time” geek library.

Because I should be in Paris right now but I’m not, this week’s other news includes a key remaining question about Microsoft’s new Windows support policy for new hardware, Google paid $1 billion to be iPhone search provider, Android made $31 billion in revenues for Google, the iPad Pro is not faster than a PC, and Yahoo continues to navel-gaze.

In the wake of last week’s blockbuster revelation that Microsoft will cut back on support for Windows 7 and 8.1 on Intel “Skylake” generation PCs, question remain. And the key one, I think, is how or if Microsoft will let PC makers and enterprise customers continue to “downgrade” to previous Windows versions on new hardware going forward. Look, we sort of get what’s happening with Skylake, regardless of whether we agree with the decision. But let’s say it’s 2017. And you, as an enterprise admin or IT pro, has just purchased 1,000 new PCs with Windows 10 Pro and Intel’s coming-generation “Kaby Lake” chipset. And you want to downgrade to Windows 7, because that’s what you use, and that’s your right under the terms of Windows Pro licensing. Can you do so? This is not clear at all, even after a careful reading of the original Microsoft blog post. And they really need to come clean on this.

You should look into overselling this storm, it’s just so rarely done.

“How much does it cost to be the iPhone’s search provider? About $1 billion a year”

Recently-released court documents related to an ongoing legal battle between Oracle and Google have revealed that Google paid Apple $1 billion back in 2014 to be the default search provider on iPhone and other iOS devices. As interesting, the documents suggest that Apple—for all of its holier-than-thou protestations about privacy—allowed Google to process and glean data from those searches on iOS. So Apple directly benefited financially—to the tune of $1 billion in 2014 alone—from Google’s activities on its mobile platform.

Hey, it worked for Change Bank.

Google has made over $30 billion on Android so far

And speaking of those recently-released court documents, here’s another bombshell. And this one nicely undercuts the theory that Android is “free” and/or that Google makes basically no money on the mobile platform. Google has in fact generated $22 billion in profits on $31 billion in revenues since Android launched in 2008, mostly from mobile advertising. But let’s put that figure in perspective: Apple’s iPhone made higher revenues (of $32 billion) in its most recent financial quarter than Android has over its entire life span.

I assume he asked for forgiveness for China. I wonder how many “Hail Mary’s” and “Our Father’s” he got.

Remember the story about the iPad Pro being faster than any laptop?

Yeah, that’s not true. Not unless the laptop in question runs a low-end Intel Atom chip, that is. The hardware experts at Anandtech have weighed in on Apple’s iPad Pro and in the exhaustive CPU performance part of the testing, they found that it’s not all that impressive. Not unless you find a mid-level Core-M processor’s performance to be impressive. Which you should not. “Intel’s Core M processors hold a CPU performance edge over iPad Pro and the A9X SoC,” the site explains, with a bit of a warning for the future. “However by the same metric there’s no question that Apple is closing the gap; A9X can compete with both Broadwell and Skylake Core M processors, and that’s something Apple couldn’t claim even a generation ago.”

To be the next Monty Python?

Yahoo to decide its fate soon

Yahoo—a “tech” company so dysfunctional it makes Microsoft look like the Cleavers from “Leave It To Beaver” by comparison—will allegedly decide what it will do with itself sometime after its February 2 quarterly earnings announcement. In other words, it will decide whether to become a holding company for Alibaba stock, or whether to make another go of its increasingly irrelevant Internet services businesses. But here’s the weird bit: According to a report in Reuters, Yahoo has in fact rejected “several” bids for its Internet services businesses already. At least Yahoo is consistent about this one thing. It can’t make a decision to save its life. Literally.