Microsoft has two distinct versions of its OneDrive cloud storage service. OneDrive is what users get when they sign up for a Microsoft Account, and Windows 10 has a built-in synchronization client for consumer OneDrive. Whereas OneDrive for Business is based on a different technology, but provides additional features, such as auditing, reporting, granular access controls, standards compliance, directory sync and Office 365 Groups support. For more information on how the two products differ, see OneDrive versus OneDrive for Business on the Petri IT Knowledgebase. 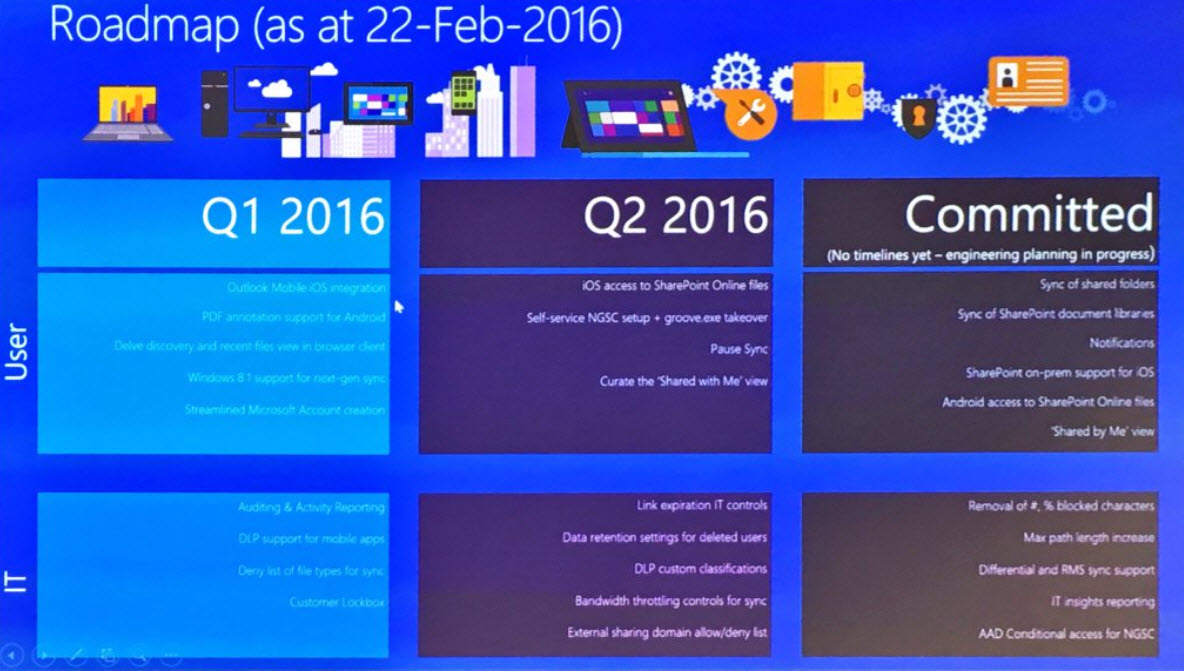 Work is currently being undertaken to unify the two solutions, specifically adding extra features to the OneDrive mobile apps for iOS, Android, and Windows Mobile, plus a new Next Generation Synchronization Client (NGSC) for Windows that will sync both consumer OneDrive and OneDrive for Business using a more reliable technology than the existing Groove client that Microsoft ships to its Office 365 customers. There’s more information about the synchronization story in Alternatives to the OneDrive for Business Sync Client on Petri.

As recently reported by Mary Jo Foley for ZDNet, Microsoft has updated its roadmap for OneDrive for Business. The Next Generation Sync Client is still in private beta, and while the ability to sync SharePoint document libraries is on the list of new features, no commitment has been made for a delivery date. Microsoft is advising that customers run NGSC alongside the existing Groove client if they need SharePoint document library sync for the time being.

Some of the most wanted features, such as removal of #, % blocked characters and increasing the maximum path length, are on the horizon but also with no commitment on when they will be delivered. Windows Mobile 10 users may also notice the lack of offline file sync support in the roadmap, which was previously announced by Microsoft for the OneDrive iOS and Android mobile apps, but would be delayed for Windows Mobile 10 until the release of Redstone later this year.

For IT, Data Loss Protection (DLP) support for the mobile apps, and deny list of file types for sync are coming in Q1, and then later in the year bandwidth throttling, custom classifications for DLP, and controls for link encryption. Finally on the map, but with no date for delivery, differential and Rights Management Services (RMS) sync support, plus improved reporting for deeper insight will be welcomed by IT.