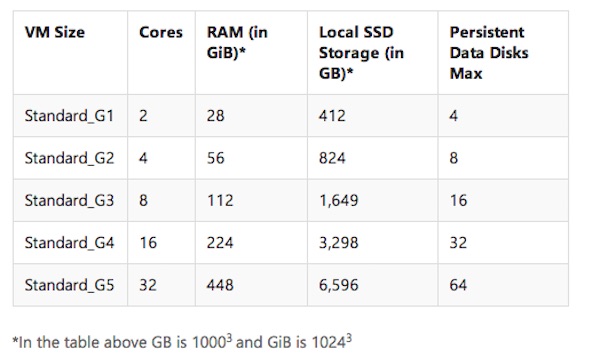 One of the key features of cloud-based services like Microsoft Azure is that they tend to get updated often. Rather than shipping updates as named and numbered versions — we’ll never see a “Microsoft Azure 2015” update, for example — updates tend to come at a much faster cadence, with clusters of new features released when ready for public consumption.

Microsoft has been especially busy updating Microsoft Azure over the last year, and just announced a trio of new improvements to the Azure service, including the availability of Azure Key Vault for enhanced security, and Docker images in the Microsoft Azure Marketplace. As we’ve covered previously here on Petri, Microsoft’s G-series Azure VM (G for ginormous? I’d like to think so) are the latest — and largest — VMs currently offered for Azure.  I’ll dive into all of these improvements in a bit more detail below.

Security in the cloud is always a sensitive subject for system administrators (and CEOs) alike, so Microsoft — and other cloud providers — have been keen to burnish their security credentials. Microsoft took another step towards making Azure a bit more secure by unveiling the Azure Key Vault, which provides some new service functionality that allows security-minded IT staff to better keep important data in the cloud, partly by supporting encryption and granting the ability to sign certificates in the cloud.

Microsoft’s Corey Sanders — the director of program management for Azure — explained how the key vault works in a post for the official Azure blog, saying that “…with Key Vault, customers can easily encrypt a SQL Server Virtual Machine with TDE (Transparent Data Encryption) using the SQL Server Connector available for Key Vault. Furthermore, customers can deploy an encrypted Virtual Machine with CloudLink SecureVM with the master keys in Key Vault.”

Azure Key Vault is available in public preview in a limited sense — it may not be available in your country — but the official GA of the service should happen in the coming months.

I’ve already written a bit about Docker here on Petri, and I’d encourage anyone reading this to get up to speed soon on what Docker is and how Microsoft (and VMware, IBM, and other virtualization and cloud providers) are embracing Docker technology. Microsoft has invested heavily in Docker support in recent months, and has announced that Azure users can now select Docker images in the Microsoft Azure Marketplace and can spin up Docker assets quickly.

For more on Docker, I’d suggest you read Russell Smith’s article here on Petri that asks if Docker containers are better than virtual machines. A few months ago I also spoke with David Messina, the VP of Enterprise Marketing at Docker, who argued that Docker is a nice compliment to existing virtualization platforms. “Application developers can focus on what they do, and system administrators can focus on what they need to,” Messina said. “Docker is focused on complete transportability…it’s a great compliment to existing virtualization technology.”

Much like Mustang and Camaro owners like to brag about the horsepower figures of their muscle car of choice — and I’ve always been a Mustang fan, for the record — Microsoft, Amazon, and Google have been quick to extoll the the sizes and capabilities of their cloud-based virtual machines. One area that has seen an ongoing game of one-upmanship is the realm of cloud-based virtual machine sizes, and Microsoft fired a weighty salvo in that arena by announcing that their colossal G-series Azure VMs are now generally available.

You can see various sizes of the G-series VMs below, but the largest maxes out at a whopping 32 cores, 6,596 GB in local SSD storage, and 64 persistent data disks.

As an aside: If you’re interested in trying to create Azure-scale VMs using your own on-premise hardware, Aidan Finn has written up a post that explains how you can create Azure-like virtual machines using Windows Server 2012 R2 Hyper-V.

So what do you think of Microsoft’s latest improvements to Azure? I’d love to hear what you think, so please add a comment to this blog post, or contact me on Twitter or Google+. You can also catch up on my posts in the Petri IT Knowledgebase forums.