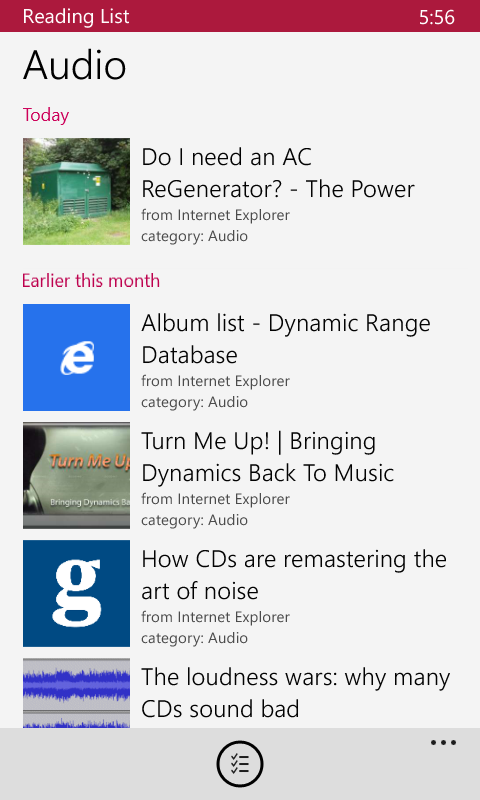 Not too long ago, I wrote about my experience with Windows Phone 8.1. I looked at the Modern UI Start screen, navigation, Windows Mail, Calendar, and the HERE Maps app. To finish up, I’m going to continue looking at some of the core functionality of Windows Phone 8.1 and discuss some issues I encountered with offline use.

When preparing for a long trip, there’s plenty of information that you need to make sure will be available at the touch of a button before setting off. After all, Internet access isn’t always pervasive, or cheap, especially in view of the astronomical roaming charges in Europe.

One of the first things that struck me about Windows Phone 8.1 is that there is no offline reading capability. Yes you read that correctly. And to make matters worse, Microsoft’s Reading List app, which was released in spring this year, also turns into a useless brick once you’re offline. 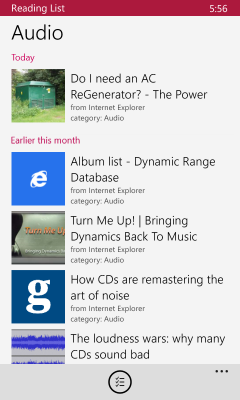 Considering that Windows Phone has a larger slice of the market in Europe than in the US, and that you don’t need to travel far to find yourself on roaming, it would seem inexcusable that there is no offline reading built-in to either IE or Reading List. And in my time with Windows Phone, I’ve found no satisfactory third-party solution that fills this need.

It’s an awkward workaround, but you can select the required information from a web page and manually paste it to OneNote, although this is a painful procedure as there is no select all function, or the ability to share the contents of a web page with OneNote, just the URL.

Once you’ve got the information in OneNote, another ugly problem rears its head. If you accidently change or delete something from a note, which is entirely likely with the Lumia 520’s tiny display, there is no undo to get it back. As an additional note, Cortana’s voice recognition also only works when there’s an Internet connection.

That brings me nicely to Mobile IE, which renders pages slower than Chrome on a similarly spec’d Android phone. That’s a completely unscientific analysis, and I don’t have any benchmarks to back up my claim, but IE does seem to be relatively clunky on Windows Phone. Having said that, I’ve found it to be perfectly serviceable most of the time. 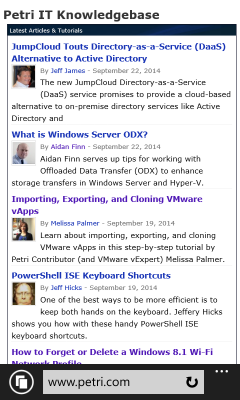 There are mobile versions of some popular sites that Mobile IE displays in their desktop variant, but I know that problem has been resolved in an update that should be available this fall. Other than that, the most annoying issue is drop-down menus. All too often they don’t work and that’s something that really needs to be sorted out. Additionally, some pages only display in part; scroll to the right and the content is not visible. A final grumble is that after IE has been launched, there’s a bit of a lag either returning to the Start screen or starting another app, suggesting that IE could still do with some optimization work.

One of the nicest features of Mobile IE is reading mode. Similar to that of Apple Safari, a button on the right of the address bar allows you to strip a page of all superfluous material, making it much easier on the eye. Mobile IE supports multiple tabs, In Private mode, and open tabs can be loaded from Windows 8 devices if you are signed in with your Windows Live ID.

I upgraded the Lumia to Windows Phone 8.1 with the Cyan software update from Nokia as soon as it became available, which includes Cortana because I have all my regional options set to US. While Cortana has some problems understanding my British accent, my limited experience with it has shown that a personal assistant, especially one that can interface with third-party apps, is an exciting development. 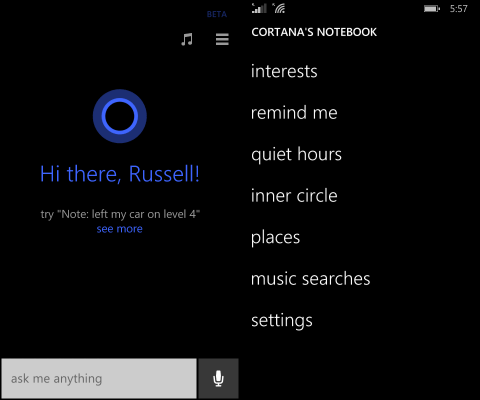 Cortana is worth its weight in gold if only for reminders, and I now find myself using them frequently for three reasons. First is that I don’t have to navigate to a specific app, such as Outlook or Calendar to set a reminder as Cortana can be launched quickly by pressing the search button on the Lumia’s bezel. Secondly, Cortana’s location-based reminders are often more useful than those based on time and date; and finally, the ability to set reminders with voice recognition is quicker than using touch.

Even if voice recognition as a fulltime replacement for the keyboard requires too much physical effort and is impractical in many cases, I’m perfectly happy to give short, simple commands via Cortana, whether that be on my phone or notebook. The potential to perform tasks faster and more efficiently means it would be shortsighted not to include Cortana in all versions of Windows going forward. Despite all the glowing praise, there is however one major Achilles heel, and that is the technology is based on Bing, making the results less useful than a search performed using Google.

Storage Sense allows you to quickly find out what’s taking up space on your phone, and is invaluable on cheaper models that have limited storage, and links to the relevant apps so you can manually perform a cleanup if required.

One of the best features of Windows Phone’s OneDrive integration when paired with Storage Sense is that as the phone fills up with photos, they are automatically uploaded to OneDrive before being deleted to free up space. This reduces the amount of housekeeping that might otherwise be required, and means you’ll never miss another precious moment because there was no space to save the photo. 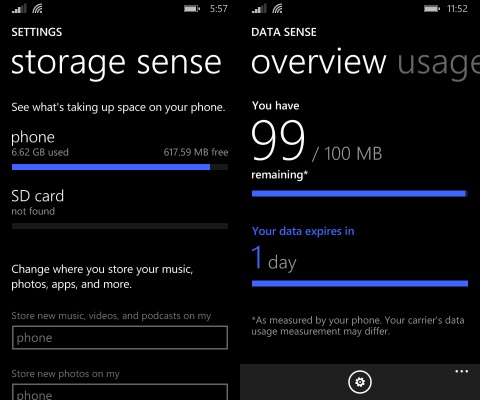 Data Sense can be configured to set monthly or one-time limits on data usage for those without unlimited data plans or when roaming. Once a limit is set, you can choose to restrict background data, and background data can be restricted when on roaming regardless of whether a data limit has been set. Internet Explorer’s data compression mode can also be triggered when you get close to the specified limit. Data Sense gives a handy graphical overview of how much data you have left and when the set limit expires.

With its built-in Trusted Platform Module (TPM), a hardware requirement for Windows 8 Phone, and the Windows Runtime (WinRT) that was designed to be secure from the ground up, Windows Phone 8.1 scores fairly high on security. There’s also a feature on the windowsphone.com portal to remotely wipe your phone when you log in with your Windows Live ID.

Apart from the iPhone 5S and upwards, there are not many phones that have built-in fingerprint readers at present, but we need them. If you need to check your phone, such as when navigating on foot using HERE Maps, entering your PIN every few minutes is a bit of an irritation. Unlocking phones with PIN codes or even a swipe patterns, though mysteriously not yet on option in Windows Phone, seems positively archaic compared to Apple’s Touch ID.

Not only do fingerprint scanners save time, but despite whatever security concerns might surround fingerprints as a form of authentication, they’re more secure than PINs. All smartphones need biometric authentication, because as we move towards using them to make payments, and more of our personal information gets connected to the accounts we use to access our phones, improving security beyond a simple PIN code will be crucial to give users confidence that their personal details will remain secure.

In view that Windows Phone has only been around since 2010, and in its current incarnation from October 2012, and by that I mean with the exception of the Modern UI, Windows Phone 8 is internally a different beast from what preceded it, Windows Phone 8.1 is an impressive platform. It’s been a long time coming, and one gets the impression Microsoft has taken it’s time in order to get it right.

If you can put up with the shortcomings I’ve discussed in this article, there isn’t much I haven’t been able to do with Windows Phone. But that’s not to say there isn’t a lot of room for improvement, mainly in the quality of the core apps that people will use on the platform, most of which lag behind their Android and iOS counterparts by miles. But hopefully the release of Windows Threshold in spring 2015 will see a surge in interest for Windows Store apps, as the option to run them on the desktop is coming, and WinRT is already almost fully converged between Windows 8.1 and Windows Phone 8.1.