At Microsoft’s Build conference last month, the company started to talk publicly about the new features coming to the Windows 10 Anniversary update that will arrive this summer. At the conference, the company outlined improved inking support, expanded Cortana features and more use-cases for biometric authentication.

Since those features were announced, the company has also highlighted new educational enhancements coming to the platform, and now we are learning about more changes that include visual updates.

Microsoft is releasing a new build of Windows 10 to Insiders in the Fast ring (14328), and this release contains a significant number of updates from the previous version. These features will eventually be included in the final release to the general public, but this version marks the first time we are seeing several of these new updates.

Although it was announced last month, Microsoft is now shipping a build of Windows 10 that contains the new inking experience that includes the new Ink Workspace. 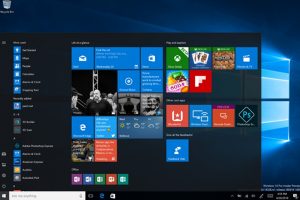 The Start menu is being refined in this release as well. The company has combined the most frequently used apps list and the All apps list into a single layout and promoted it to the top level of the interface to reduce scrolling and clicking.

Tablet mode is being updated with the company returning the full-screen All Apps list from Windows 8. It’s also now easier to toggle between pinned tiles and the All Apps list as these items are docked in the left rail of the Start menu. Finally, in tablet mode, you can now set the option to ‘auto-hide’ the Taskbar.

Cortana is now accessible from the lock screen, which means you can set reminders and ask the digital assistant questions without having to unlock your device. For sensitive tasks, such as viewing items on your calendar, you will be required to unlock your device for Cortana to respond.

When it comes to reminders with Cortana, the feature is being improved. You can now create a photo reminder by taking a picture of something you want to be reminded about and you can also set reminders from content inside Universal Windows Platform (UWP) apps. If a UWP app uses the share contract, such as Edge or Microsoft News, you can set reminders based off of content using the share feature with Cortana.

UWP apps now support badging on the taskbar; meaning if you get a new email, there will be a badge on the mail icon to show you how many items are unread. This feature is now supported across all UWP apps and if you have an app that crashes or ends up in a bad state, in the Settings panel you can now reset it by going to Settings > Apps and features. Just choose “Advanced options” for a specific app under Settings > Apps and features and you will see the reset button.

If you are a user of OneDrive, deeper file search is now supported in Windows 10. This means you can quickly search files on your local drive, as well as what you have stored in the cloud.

Action Center is being updated to support richer notifications, you can also re-arrange the quick links at the bottom of the window, and the company is moving the Action Center button to the right of the clock. Speaking of the clock, it will now show up on all monitors instead of only showing up on the primary display; the clock also now integrates with your calendar and by clicking it, you can see your events for the day. 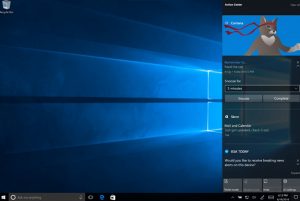 If you use the virtual desktop feature in Windows 10, there is a new gesture to make it easier to switch between the views. By swiping with four fingers left or right you can jump between desktops; if you want to refer to two adjacent desktops, you can keep your fingers down and drag back and forth. To be able to take advantage of this gesture, your device will need to have a precision touchpad.

The lock screen is being refined, your email address by default will no longer be shown, and there are new media controls that make it easier to change the music playing without unlocking the device.

One feature that will impact the IT pro crowd is that the company is adding additional authentication mechanisms for UAC. In the Anniversary update, when you are prompted to enter your credentials or elevate a program, you will now be able to do so with Windows Hello, a PIN, certificate or a simple password.

File Explorer is getting a few small tweaks; the company is changing the icon to match the other modern apps on the desktop, and it will no longer be pinned by default to the taskbar.

And finally, if the above list wasn’t enough, there are changes being implemented for Connected Standby. With the new release, Microsoft is leveraging some of the backend-technology used with Battery Saver to make Connected Standby use less power; if you don’t want to use the old version of Connected Standby, you can enter the following lines from an admin command prompt:

With today’s release of Windows 10 to Insiders in the Fast ring, Microsoft is introducing quite a few new features for the OS. It’s clear that the company has built a significant amount of additional functionality into the operating system, and I’ll be curious to see what else they announce before shipping this updated version of Windows 10 to consumers this summer.