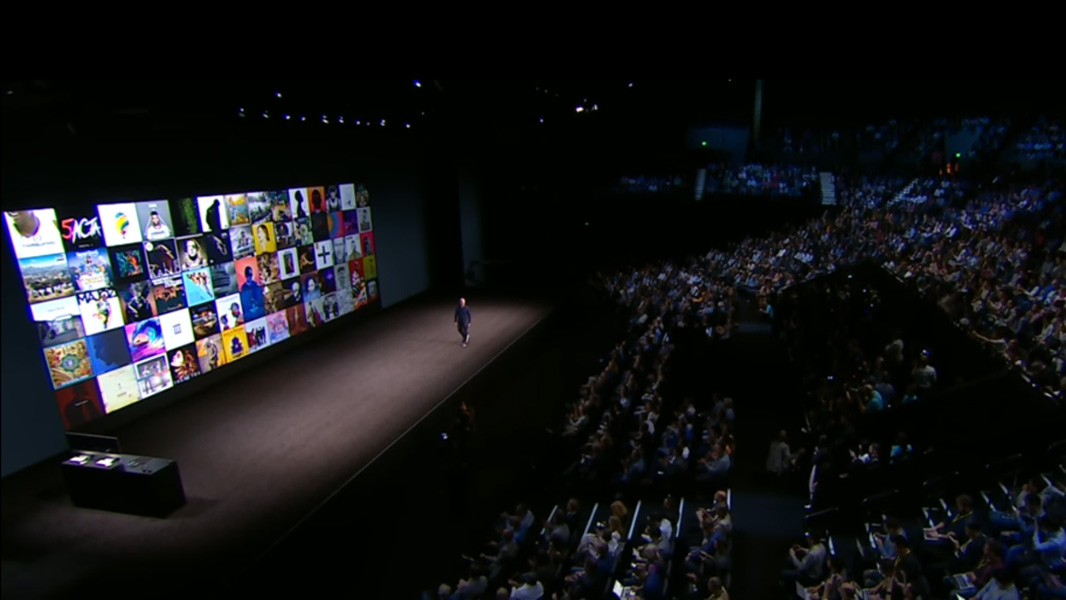 Forget the naysayers: Apple has delivered another blockbuster quarter on the back of its most successful iPhone launch ever.

Most interesting, perhaps, Apple has also revealed its next big product offering. And it’s not a tablet, watch, or another hardware device; its the firm’s services business, which rocked to over $7 billion in revenues in the quarter. And Apple now expects this business to double in four years.

“We’re thrilled to report that our holiday quarter results generated Apple’s highest quarterly revenue ever, and broke multiple records along the way,” Apple CEO Tim Cook said in a prepared statement. “We sold more iPhones than ever before and set all-time revenue records for iPhone, Services, Mac and Apple Watch. Revenue from Services grew strongly over last year, led by record customer activity on the App Store, and we are very excited about the products in our pipeline.”

Apple’s incredible results—net income of $17.9 billion on record revenues of $78.4 billion—have completely rewritten the script on what analysts were predicting from the company. Though its net income was a bit lower than the same quarter a year earlier, Apple beat all expectations, financial and otherwise.

The most stellar result, of course, came from iPhone. Apple launched the iPhone 7 and 7 Plus in the quarter, and the new phones delivered to the tune of 78.3 million units sold, up from 75 million in the year-ago quarter. That’s doubly impressive given that the iPhone 7 family is just yet another minor refresh, and not a major new product version.

As has been the case recently, iPhone was by far Apple’s biggest business: It contributed $54.4 billion in revenues, or 70 percent of Apple’s total. The one down point was that growth was only 5 percent, the first time an iPhone launch has triggered less than double-digit growth. (But whatever. Who would argue with 78.3 million iPhones sold?)

The Mac remains Apple’s second-biggest business, with $7.2 billion in revenues and 5.37 million units sold, the latter an improvement of 7 percent year-over-year. With PC makers selling 71.4 million PCs overall in the quarter, the Mac jumped to 10.1 percent of the PC market. Not bad given that Apple launched the controversial new MacBook Pro in the quarter.

Apple’s third-biggest business is now services, which accounted for $7.17 billion in revenues. And as noted, Apple now expects this business to double within four years. Given Apple’s loyal customer base, this makes sense: These folks love to throw money at Apple and will certainly continue to do so.

Apple offered a few specifics on services, too. Services margins are even higher than for its hardware products, the firm admitted in a post-earnings conference call. And revenue from the App Store jumped 43 percent in the quarter. Customers spent $3 billion on services purchases (apps, games, content) in December, the best single month ever, Apple said.

The iPad continues its downward spiral, with sales now falling for 12 straight quarters year-over-year; that is fully three years of falling—not slowing, but falling—sales. With 13 million units sold (down 19 percent YOY) and revenues of $5.5 billion (down 22 percent YOY), iPad is still a sizable business. But iPad revenues now account for just 7 percent of Apple’s total. Back in 2015, it accounted for 10 percent, and in 2013 it was almost 19 percent.

Apple funnels its smaller and less successful products—Apple TV, Apple Watch—into an “Other” category which accounted for $4 billion in revenues, a drop of 8 percent YOY. Apple Watch falls into this category, and using “Surface math”—a vague comparison with no hard numbers—Mr. Cook claimed that Watch revenues set a “record” in the quarter.

Apple ended the quarter with $246.1 billion in cash and cash-like assets. But 94 percent of that is held outside the United States because of the high cost of tax repatriation. Mr. Cook said there was bipartisan support in the U.S. government to ease that tax burden.