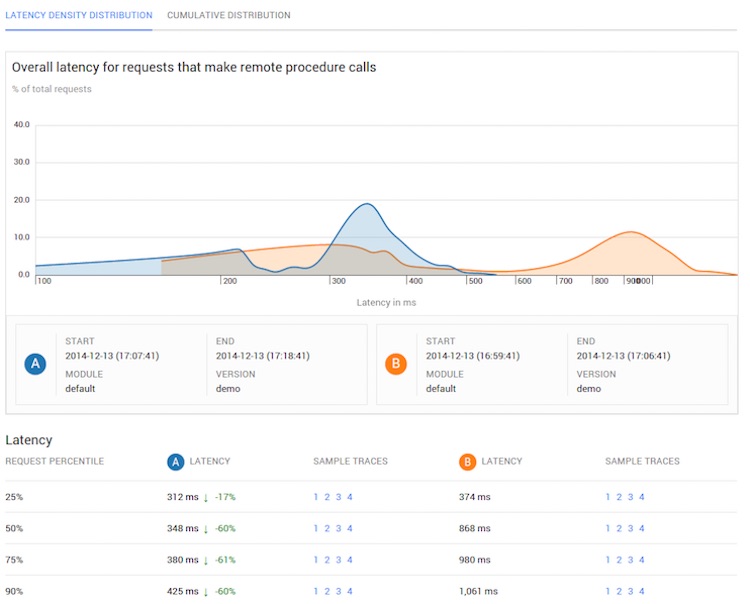 Last week Google announced the availability of Google Cloud Trace, a new performance diagnostics tool that will help Google Cloud Platform developers find and resolve performance issues of their applications using that cloud service. Google is currently fighting for the hearts and minds of cloud developers who may also be considering rival cloud services like Microsoft Azure or Amazon Web Services, so Google hope that the arrival of Google Cloud Trace will give developers yet another reason to choose their platform for cloud app development.

What is Google Cloud Trace?

Pratul writes that developers using Cloud Trace “…can diagnose performance issues in your production application by quickly finding the traces for slow requests and viewing a detailed report of where time is spent in your application while processing these requests. Its trace analysis feature allows you to see the latency distribution for your application, and find the painfully slow requests that may be affecting only a small number of your users. You can also use the trace analysis feature to check if the performance of a new release is better than the previous release.”

Developers can use Google Cloud Trace to compare and contrast latency between applications and application versions. (Image: Google)

While news that Google has released a tool to help developers improve cloud application performance may — at first blush — seem a bit granular and off-topic for an IT-focused publication like the Petri IT Knowledgebase, I think the importance that Google and other cloud providers are placing on helping developers get the absolute best possible performance out of their cloud apps is directly connected to cloud adoption by the enterprise.

Case in point: Microsoft Azure, like Google and Amazon, has had several well-publicized outages over the last 12 months, and those outages directly impact the daily lives and work schedules of IT professionals. The same goes for IT shops who are using applications that live in Amazon or Google clouds. If performance is slow, applications don’t work as advertised, and the IT professionals managing that service relationship on behalf of their organization are the ones who feel the heat.

By extension, that ire passes on to Google, Amazon, and Microsoft, and helps feed the counter argument among some IT pros that the cloud isn’t ready for prime time. The application developers themselves likely won’t receive the blame, but the outrage tends to be directed at the cloud as a whole. So anything Google can do to help application developers write faster, better-performing, and more reliable cloud apps will have a spill-over effect on making cloud-based solutions look good.

As I’ve said before: The cloud isn’t a panacea, and it still has some growing pains to work through. But it’s clear that all the major cloud providers are going out of their way to address complaints that some IT veterans have about the cloud, and that can only be a good thing for everyone.

So what do you think of the work cloud providers are doing to help make cloud apps faster and more reliable? I’d love to hear what you think, so please add a comment to this blog post, or contact me on Twitter or Google+. You can also catch up on my posts in the Petri IT Knowledgebase forums.