Connecting Users to the Azure Cloud

In this article I’m going to discuss the most forgotten aspect of migrating or deploying services into the cloud: Exactly how will the users connect to the services that will be running in Azure?

I invented a new form of networking last year to deal with a common problem I am encountering with people who are considering deploying new services or migrating old services to the cloud. Lots of people have tried to hop onto the cloud bandwagon as it has been zooming past them. But when caught in that flash, they fail to account for considerations that they’ve been dealing with for over a decade: If I put the user in Place A and the server in Place B, with a latent network connection between them, then how will the user connect to the service?

What will the client experience be like when accessing a database over an 80 MS connection when you’ve always had less than 1 MS between the thick client application and the server?
And then I realized that these people had been planning to use WHAN … wormhole area networking. Packets would simply dematerialize from the user’s PC and rematerialize on the Azure virtual machine’s virtual NIC. Obviously, this is the way forward, so I *cough* trademarked it. Hey! If Apple can patent rounded icons then I can claim WHAN! 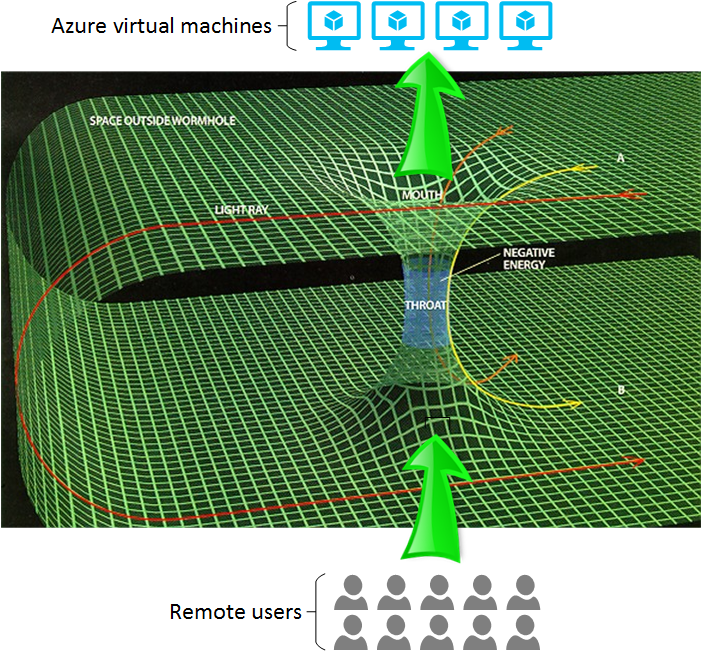 Let’s get serious. What can you do to connect users? Here are some options to consider, from the traditional to the more cloud-suitable options.

One of the downsides of VPN is that Microsoft cannot provide an SLA between the outside of your firewall and their data center. Another is that VPN is limited to connecting to Azure virtual networks (virtual machines).

Microsoft has partnered with other telecommunications companies to provide SLA-protected private connections between a customer and their Azure subscriptions (not just virtual networks). You can either:

These plans are limited to a small set of service providers in a small number of markets. ExpressRoute is also very expensive.

With VPN and ExpressRoute, we have a latent connection between the end user and the service. We can throw bandwidth at the problem, but that just means more old applications can have the same bad experience. My favorite method for connecting users to remote services is to use RDS. This is an old technique that:

There are two ways to do deploy RDS in Azure:

How can I forget Citrix? If you do some searching you will encounter a paper called Deploying XenApp 7.5 on Microsoft Azure Cloud. Interestingly, Citrix also found (as did Microsoft any others) that the Standard A3 virtual machine gave them the sweet spot between performance and price.

Modern applications don’t use thick clients anymore. You either use a web browser or an app, and the connectivity between the user and the service is based on HTTP or HTTPS. Any service that is built on HTTP/S is:

When you are considering the cloud as an option, you need to think of more than just virtual machines. You need to consider storage, networking, security, and those annoying people that want to use the services and data. Remember to investigate the workloads that Azure will be hosting, and plan for a suitable way for users to connect to this services.