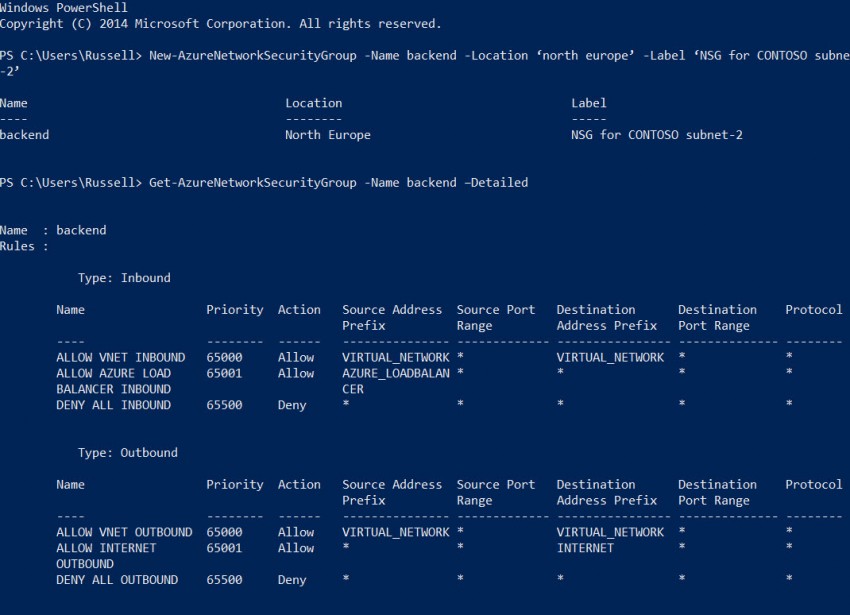 In this Ask the Admin, I’ll show you how to secure Microsoft Azure virtual networks using Network Security Groups.

You might already be familiar with another type of network security in Azure that’s used to control access to individual virtual machines (VMs) from the public Internet. By default Azure VMs receive two endpoints when they are provisioned to allow RDP access and PowerShell remoting.

Introduced in autumn 2014, Azure Network Security Groups (NSGs) are high-level objects in your Azure subscription that are created in an Azure region. They differ from endpoint-based ACLs in that they can be applied to more than one VM by associating them with VMs or subnets. They can also survive the lifecycle of VMs and are typically used to fence off Azure subnets from one another without needing to specify endpoint-based network ACLs for each VM in the subnet.

For example, you might want to create a DMZ, and then restrict network traffic that flows between additional subnets: one designated for application servers, and the other for database servers. NSGs control all inbound and outbound access to and from associated VMs, but not from the public Internet.

There are a couple of prerequisites that you’ll need to consider in advance of deploying NSGs. Before a NSG can be associated with a VM, all endpoint-based network ACLs must be removed. NSGs override endpoint-based network ACLs, so they don’t need to be explicitly removed if you plan to associate a NSG with a subnet. Secondly, NSGs can only be used with VMs in regional VNets, i.e. not those associated with an affinity group.

In my Azure lab, I have two subnets in my VNet. Subnet-1 is the Internet-facing frontend with access controlled to a single VM using the default endpoint-based network ACLs, and Subnet-2 will be secured with a NSG to ensure that only specific network traffic is allowed to pass inbound from Subnet-1.

On your management PC, open a PowerShell prompt and enter the command below. You’ll need to specify the region where your VNet is located, for instance ‘north europe’ as shown, or ‘uswest’ for example.