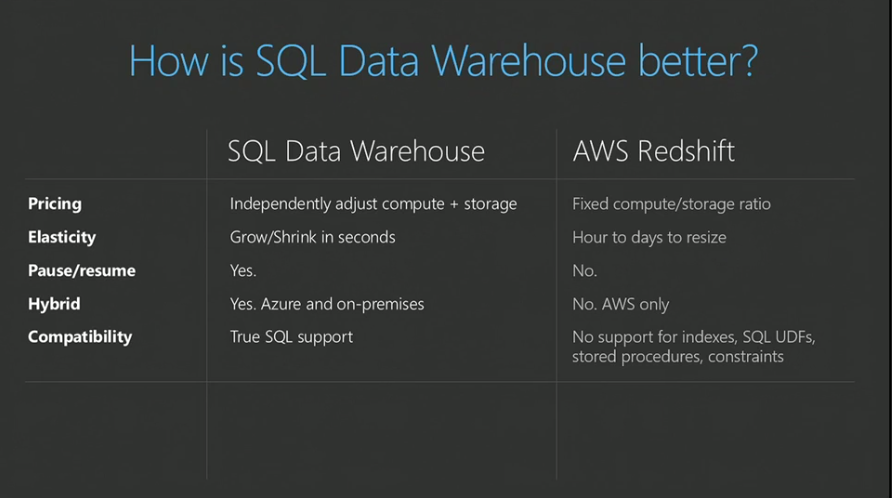 During today’s keynote at Microsoft’s Build developer conference in San Francisco, the company made several different database announcements that are meaningful for not only providing companies with a variety of storage needs for a variety of situations, but also helping us understand how Microsoft plans to face its competitors in the cloud space.

Both of these key features of Azure SQL Data Warehouse is a win-win for consumers and will likely serve as a more cost-effective billing solution. Developers can scale what they need individually compared to Amazon’s Redshift solution. Redshift currently takes a different approach where scaling changes must be made in lockstep, in addition to a 24-hour billing cycle that doesn’t provide the flexibility to pause or resume computes.

Scott Guthrie also made comparisons to how Azure SQL Data Warehouse stacks up against Redshift, which you can see below in the following image:

Microsoft also announced Azure Data Lake, which is described as a new hyper-scale repository for big data analytic workloads. Microsoft’s intention with Data Lake is that it provides developers with a single place that supports both structured and semi-structured data in a native format and doesn’t require storage limitations on individual files. Notably, Azure Data Lake is compatible with Hadoop, meaning that it’ll work nicely with popular big data solutions such as Spark, Storm, Kafka, Hortonworks, Cloudera, and Microsoft’s Azure HDInsight. A public preview date hasn’t been announced yet, but you can sign up for notifications from Microsoft as more information becomes available.

Finally, Microsoft also unwrapped new Azure SQL Database elastic databases, which provides developers with a new provisioning option to better manage rapidly changing storage requirements, while keeping costs predictable. The idea behind Azure SQL Database elastic databases is that databases are stored in a single pool to avoid overprovisioning, but also allows for room to adjust to peak demand. You can access these features now through the Azure Portal.

Today’s news is beneficial to consumers on both Microsoft and Amazon fronts. On one hand, Microsoft is actively facing Amazon head on with new attractive and practical data storage and management solutions that should help alleviate cost concerns. On the other hand, Azure SQL Data Warehouse and Azure SQL Database elastic databases are two new offerings that Amazon currently is unable to reciprocate with consumers. This battle between cloud companies is likely to ensue for awhile, but it’s important to note that consumers are likely to reap the benefits as cloud competitors continue to introduce compelling new features that are tailored to their an organization’s needs.