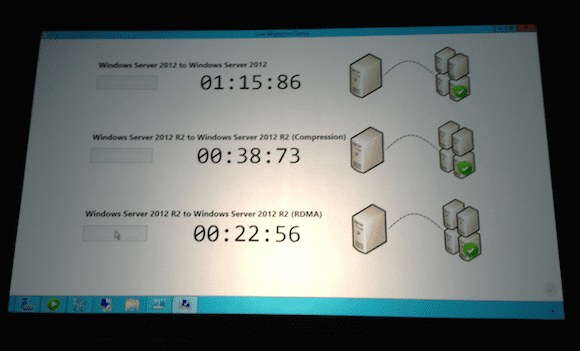 The overriding theme of the upgrade is one of making it easier for IT administrators and cloud service providers to use Windows Server 2012 (along with System Center 2012 and Windows Azure) as a vital part of Microsoft’s Cloud OS strategy.

This article will focus on providing a top-level overview of what you can expect to see in Windows Server 2012 R2. Where appropriate, we’ll be adding links to more technical deep dives into each of the feature listed here. Please note: This is also only a partial list of the new features being announced in the R2 release; we’ll be updating this article with more features over time, so be sure to bookmark this page and check back often for updates.

The sheer number of new features being introduced that focus on storage improvements in Windows Server 2012 R2 is impressive, with enhancements in just about every area in the Windows Server storage subsystem. Here are a few highlights:

Automated storage tiering: Storage in Windows Server 2012 can be configured to allocate workloads to the most appropriate storage types. For example, you can configure SSD drives to be prioritized for applications and workloads were speed and latency are vitally important, and to rely on slower types of storage for less important workloads.

“Generation 2” virtual machines: Windows Server 2012 R2 Hyper-V introduces what Microsoft is calling “Generation 2” virtual machines. Gen 2 VMs only support the 64-bit versions of Windows 8 and Windows Server 2012 R2 as guest OSes. Gen 2 VMs remove all of the legacy, BIOS-based functionality of traditional VMs. These VMs are UEFI-based, have no emulated devices, can boot off virtual iSCSI and network adapters, and support secure boot. The benefits to using Gen 2 VMs could be numerous, including the potential of vastly reduced VM sizes by eliminating support for legacy, BIOS-based overhead. Traditional “generation 1” virtual machines will still be enabled by default.