What is I/O Virtualization (IOV)? 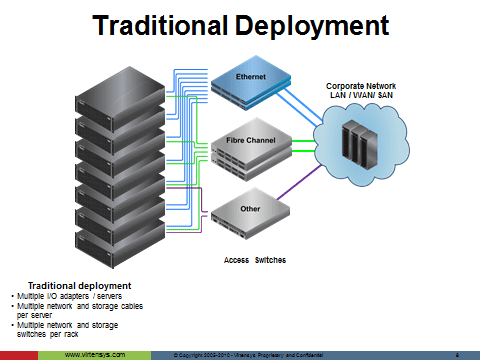 There are various forms of virtualization with some being much more popular than others. For example:

Instead, let’s talk about a topic that has been fascinating me lately and that is I/O Virtualization (or IOV).

What is I/O Virtualization?

In my opinion, understanding IOV can best be described with pictures and math.

Here is how the typical server datacenter “does IO” today:

With traditional I/O, EVERY server has:

If you have 6 connections per server and 100 servers, you are talking about 600 connections – that’s a lot.

The theory with IOV is to take a single cable (or two if you want redundancy) and consolidate all the network and SAN connections onto that single, high-speed cable (does it sound similar to consolidating many smaller servers onto a single high-capacity server?). 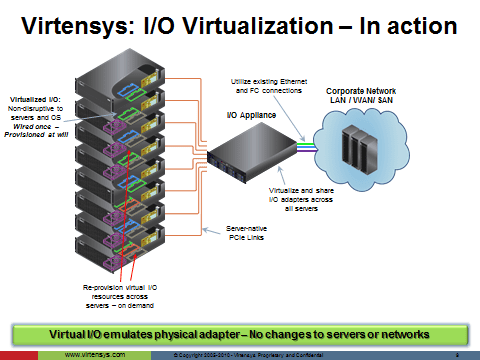 I like it because it just makes things simple and that’s how thing should be in a datacenter.

In this graphic, you’ll find some additional benefits of IOV: 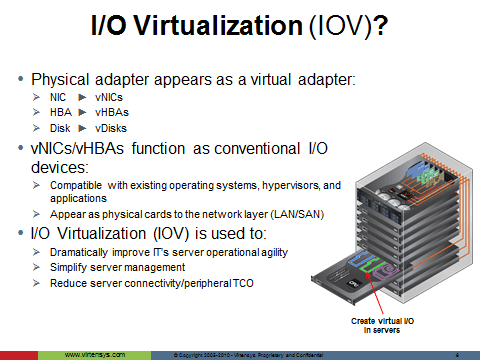 While I had heard about I/O virtualization first at VMworld 2009 when VMware was using IOV to connect the 1000+ servers in their lab environment, I didn’t have time to go into too much detail on it. Recently while attending VMware Partner Exchange (PEX) 2010, I had the chance to interview a real IOV guru from an IOV company, Virtensys (who also provided me the graphics for this post). In the video, Stephen Spellicy of Virtensys whiteboards how IOV works which may help to explain this even better than the graphics above.

In summary, virtualizing and consolidating IO in the datacenter is an area where most IT Pros need more education. This is a relatively new form of virtualization but has lots of benefits to offer us today and shows how future datacenters could be simplified and could be implemented at, potentially, lower costs thanks to IOV.