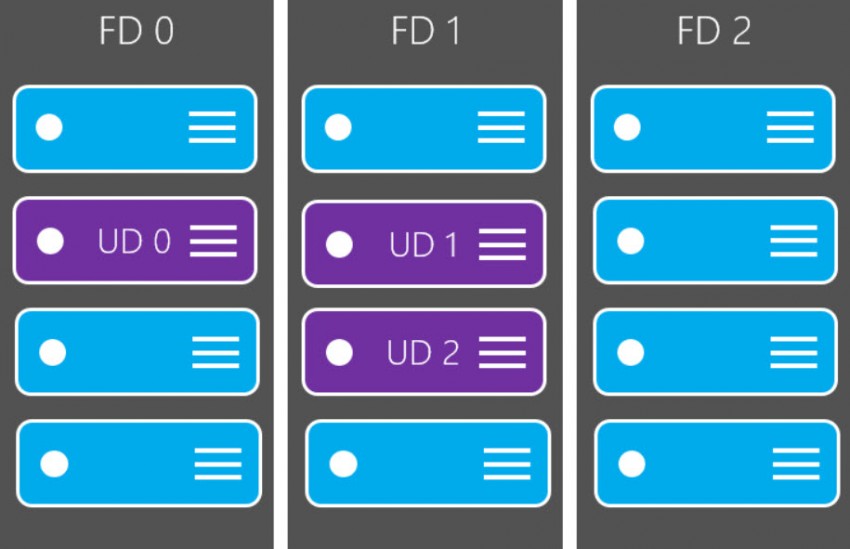 In a previous Ask the Admin, Automate Domain Member Server Deployment in Microsoft Azure, I updated my PowerShell script for deploying domain controllers in Azure VMs by joining the new VM to an Affinity Group, something that’s beneficial for performance and also helps to keep costs to a minimum. For more information on storage performance and Affinity Groups, see Optimizing Azure Storage for Windows Server Virtual Machines on the Petri IT Knowledgebase.

Microsoft periodically updates the underlying Azure fabric that’s used to host VMs to patch security vulnerabilities and improve reliability and performance. These updates, which Microsoft refers to as planned maintenance events, are often performed without any impact to guest VMs. Sometimes, however, guest VMs must be rebooted to complete an update. To reduce the impact on guest VMs, the Azure fabric is divided into Update Domains to ensure that not all guest VMs are rebooted at the same time.

Unplanned maintenance events are those which involve a hardware or physical failure in the fabric, such as a disk, power, or network card outage. Azure automatically fails over guest VMs to a working physical host in a different Fault Domain when an error condition is detected, again aimed at ensuring availability.

Add a VM to an Availability Set using PowerShell

Unlike Affinity Groups, VMs can be added to Availability Sets either during the provisioning stage or after. Additionally, you don’t need to explicitly create availability sets before using the commands shown below. For more information on using PowerShell to manage Azure, see Setup Windows Azure PowerShell Management on Petri.

To add a VM to an Availability Set when provisioning, use the –AvailabilitySetName parameter of the New-AzureVMConfig cmdlet as show below, replacing the values in –Name, -InstanceSize and –ImageName as appropriate:

Alternatively, you can add a VM to an Availability Set after deployment using the Set-AzureAvailabilitySet cmdlet as shown here. Bear in mind that the Update-AzureVM cmdlet will force a reboot.

To list all the VMs in your Azure subscription, along with the information about their Availability Set membership, use the command below:

Or use this command to show information about deployments in a named cloud service, in this case contosodc11: