The Friday Funny: Kevin Costner and the Apple Lisa 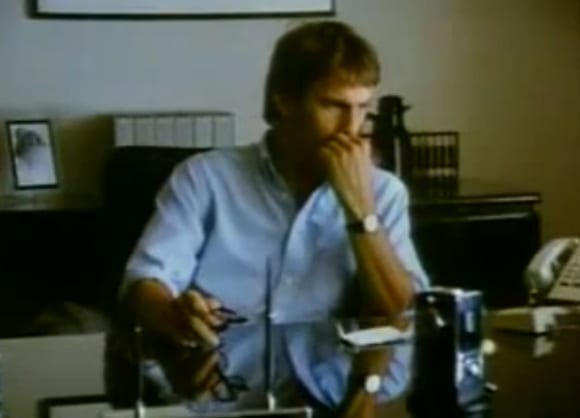 Apple is now the world’s most valuable tech company, but it hasn’t always been this way. In the early 1980s — before the Macintosh, the iPod, the iPhone, the iPad, and the billions of dollars in revenue that all those products created — Apple was just beginning to venture into the world of point-and-click computing. While Microsoft and Apple partisans may argue like ill-tempered siblings these days, in the early 1980s Apple was still largely known as the company that developed the Apple II and helped usher in the era of the personal computer.

Kevin Costner contemplates the Apple Lisa in this still from an Apple TV ad, circa 1983. (Video below)

Development of the mouse-based Apple Lisa — the precursor to the Macintosh — began in 1978.  It was released in 1983, and was a rare commercial failure for Apple. Apple did it’s best to market and promote the Lisa, including a short television spot that featured a (then) young actor by the name of Kevin Costner.

In the ad, Costner is shown walking into an office building in the wee hours of the morning, a well-behaved dog in tow. After booting up his Lisa and awkwardly clicking the mouse with his left hand a few times, Costner receives a phone call and informs his caller that “He’ll be home for breakfast.” It’s not exactly the Mac vs PC ads yet, but it’s clear that Apple was hard at work defining itself as the iconoclastic counterpoint to the relatively staid IBM PCs of the day.

Have any other humorous IT ads that you’re fond of? Let me know some of your favorites by adding a comment to this blog post or reaching out to me on Twitter.