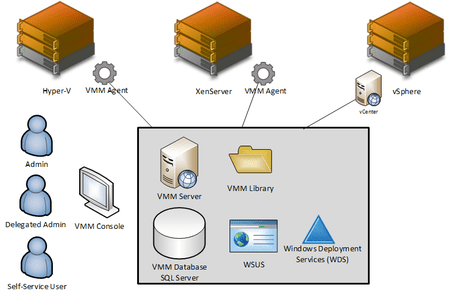 What are the components of Microsoft System Center Virtual Machine Manager 2012 SP1?

Before you consider the architecture or requirements of VMM, you should know what each feature will do. You should also determine if you will need them and calculate your need for scale-out and high availability. So for today, I’ll describe the purposes of each component of Virtual Machine Manager (VMM or SCVMM) 2012 SP1.


Editor’s note: For more in this series, check out the following articles:

The VMM service is a small installation. It is the central piece of the Microsoft cloud, coordinating the fabrics and compute resources, managing service deployment, and delegating (controlled and measured) access to administrators and self-service users. VMM 2012 SP1 can be made highly available on a Windows Server failover cluster.

A relatively small SQL Server (Standard edition or higher) database is required for VMM. This database can be installed on the VMM server, on another server, or on a SQL Cluster. It does support SQL Server 2012 Always On, but reviews of this are mixed.

The Library contains an IT-controlled collection of reusable resources such as VM templates, VHD/X files, OS and Hardware profiles, scripts, ISO, files, stored offline virtual machines, and so on. The Library is made up of two parts: The library is made up of two parts: the file share and the SQL database. The file share can be on VMM server, another server, or a failover cluster. BITS (not ODX) is used to transfer files to and from hosts. Files are added to the library using Windows Explorer. The SQL database contains Library metadata. This includes things like profiles and descriptions of files in the file share.

Hosts are managed using a small agent. The agent is deployed onto Hyper-V and XenServer hosts. Note that ESXi and ESX hosts can only be managed by VMM through VMware vCenter.

The VMM Console is the administrative tool for managing VMM and it’s installed on the VMM server. There is no need to log into the server to manage VMM; you should install the VMM console onto any PC that is used by a VMM administrator. Everything that VMM does is PowerShell under the hood: The code of any wizard can be surfaced by clicking a Show Script button at the end of the wizard.

VMM can provide patch deployment for the hosts and VMM infrastructure. Note that the patching features of Windows Server 2012 are better suited for those who prefer administration; in that case, VMM’s baseline patching mechanism provides a nice compliance feature for VMM administrators, independent of the mainstream patching solution. VMM requires a WSUS server to synchronize updates from the Microsoft update catalog. This can be a shared WSUS server.

VMM administrators can deploy Hyper-V to bare-metal servers using a baseboard management controller (BMC, such as HP iLO or Dell DRAC) to manage the power of the hosts. WDS is used to provide a PXE boot server for the bare-metal host deployment system. Like the other components, WDS can be installed on the VMM server or on another server.

Where is the Self-Service Portal?

The VMM Self-Service Portal was deprecated in VMM 2012 and removed from VMM 2012 SP1. There are several alternatives: