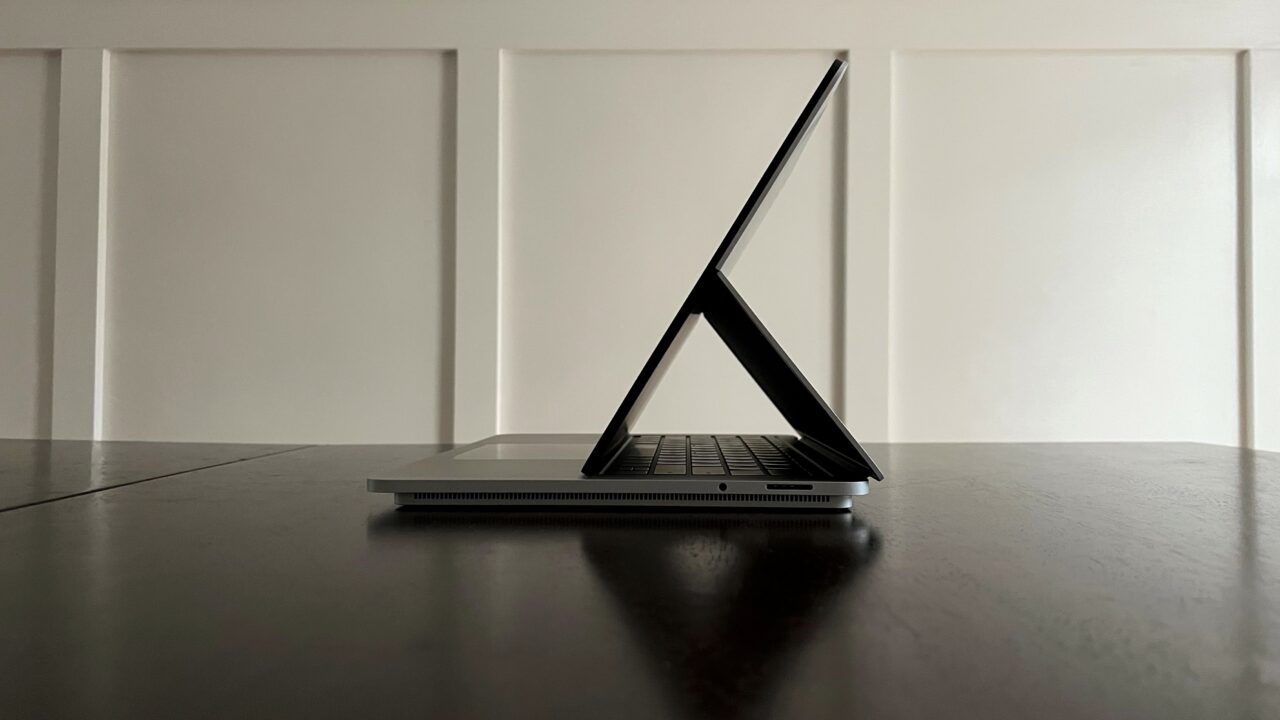 Several years ago, Microsoft took to the stage in New York City and unveiled the Surface Book, a device that was the pinnacle of Surface. It was a laptop, a tablet, a do-all, be-all device that the company hoped would set the brand apart as being ambitious but also establish that it was able to execute complicated designs.

After three revisions, the company is back with a new flagship but this time around, they are attempting to build a better mousetrap, rather than force a design into existence.

You could look at this through the lens that Surface Book was a failure but I don’t think that is appropriate. What Microsoft announced last month is the Surface Laptop Studio, an evolution of the mindset of what the high-water mark can be for Surface.

So what happens when you take a Surface Studio, a Surface Laptop, and a Surface Pro and put them in a blender. You get the DNA to create the Surface Laptop Studio which I have been using for a few days – these are the initial impressions but a longer-term review is on the agenda.

With a device like the SLS (Surface Laptop Studio), raw specs don’t tell the entire story. Sure, this device can be outfitted quite extensively with an Intel i7 CPU, 32GB of RAM, Nvidia A2000 (or RTX 3050ti), up to 2TB of storage which should be enough horsepower to run most graphic-intensive applications and highlights that this is a portable workstation, not a minimalist travel companion (take a look at the Surface Pro 8 if that’s what you are looking for).

The ports are mostly heading in the right direction, with a pair of Thunderbolt ports, headphone jack, and Surface Connect, the only thing missing is an SD slot. But with TB4 now being included on this (and on the Surface Pro 8), this opens the door to a much better experience with peripherals, especially docks and external GPUs.

Much like the Book 3, the party trick for this device is with a hinge that expands the functionality of the laptop. For the SLS, this means the display can be pulled forward and turn into a Surface Pro-like device or lay flat like a tablet. By pressing firmly at the top of the screen, the bottom pivots towards you almost violently.

The bottom of the display is attached using magnets and Microsoft clearly chose magnets that could also be used in a junkyard to pick up scrap metal – they are quite strong. What this means is that you grab the top of the display and apply a healthy amount of force, the bottom snaps free and moves forward.

But the issue is, and maybe doing this enough times will break the habit, the way you instinctively press on the display is also right where the close button is on the window of the app you are using. While writing this and tilting the display, I accidentally closed Word two times.

Once the display is free, it can be pulled forward, and once again, magnets will “lock” it into place to create the Surface Pro-like posture. Tilt it a bit more, and you get the tablet configuration. And let me be the first to say that this is far better than the Surface Book design.

Yes, the Book design technically was more impressive but its faults outweighed its benefits. Because the display never disconnects, I am optimistic that this will result in a far more stable piece of hardware.

Like the Surface Book, the SLS has a design that can be polarizing. The keyboard deck sits on top of what looks like a laptop cooler that you would buy on Amazon…but it’s integrated and made of higher quality materials. Is the design good or bad? That’s in the eye of the beholder but one thing is for sure, it stands out from the rest of the laptops you see on store shelves.

When those fans do turn on, especially if you have the CPU set to “best performance”, the heat output is quite impressive but can be loud when at max RPM. But when the fans are not spinning, the built-in speakers are surprisingly good for a laptop.

The keyboard continues to be a strong point for Surface and I have no issues with the keys on the SLS. The trackpad is a different story – the travel distance when left/right-clicking is minimal and I much prefer the travel distance on the Type cover for the Surface Pro 8. For the vast majority of people, I don’t think this will be an issue but for those who are sensitive to these kinds of things, it may be worth looking into before purchasing.

I will point out that the deck of the SLS is quite sharp, as was the Surface Book deck – when you rest your arms on the laptop, you will get lines across your wrists which can grow uncomfortable during longer sessions.

But the raised decklid does allow you one additional “trick” if you will, you can dock the Surace pen to the bottom of the ledge and also charge it in this position. When you need the pen, it will be there, unless you knock it really hard, it sticks firmly to the SLS.

And when you are ready to draw, you get Microsoft’s best inking experience to date. The 120hz display and haptics in the pen provide a better experience than anything the company has created previously. I think this comes down to the display being 120Hz than the haptics of the pen which feels more novelty than beneficial. But, you can turn the haptics off if that is not your thing and I can’t complain about having the option available.

Along with releasing the hardware, Microsoft is also shipping Windows 11 today and that’s what you will be using when open the lid on your first boot. It’s worth pointing out that it took about 10 minutes from opening the lid to actually using Windows 11 as it looks like it downloads a healthy amount of updates (or possibly a new build) during the configuration process.

Windows 11 does help make the SLS experience better with the inking options appearing on the display right when you need them, additional icon spacing is enabled when touch input is expected, and compared to Windows 10, Windows 11 is the step in the right direction for hybrid workflows.

The Surface line also continues its tradition as being workplace friendly. With features like Windows Hello, TPM 2.0, the same Surface Connect port, and minimal bloatware pre-installed, like other Surface devices, it should be easy to deploy in the workplace either as a new device or as part of an existing fleet of devices as the Surface Connect will work with your existing peripherals.

One thing to know is that this device weighs in at about 4lbs. Many years ago, this thing would have been considered a lightweight in the category in which it resides but for those who use slim carrying bags, the breadth of this device is apparent. If you are tossing this in a backpack, you likely do not have too much to worry about.

It’s a bit hard to give the Surface Laptop Studio a full comprehensive review as I haven’t been using the device long enough to better understand the durability of the hinge or if the 11hrs of battery life is consistent across multiple months of usage or only representative of a few days of testing. This is why it’s important for frequent check-ins which is what you can expect over the next few months.

But there is something to the Surface Studio Laptop, it reminds me of the Italian sportscars from the 80s that had hilarious quirks but we all still love them. That’s the Surface Laptop Studio, it has a raised deck that makes it standout, the display pops out with a comical amount of force, and you accidentally close apps on occasion, but there is also a lot of power under the keys that makes it something that is fun to use and so far, reliable as well – a noted deviation from 80s Italian cars.

If you are looking for something quirky and fun while also maintaining a semblance of professionalism, the Laptop Studio hits that mark. It’s not perfect but I think that’s ok. Far too often we chase perfection and ignore the practical and for the right user, I suspect this device will be the perfect blend of flexibility, power, and inking.