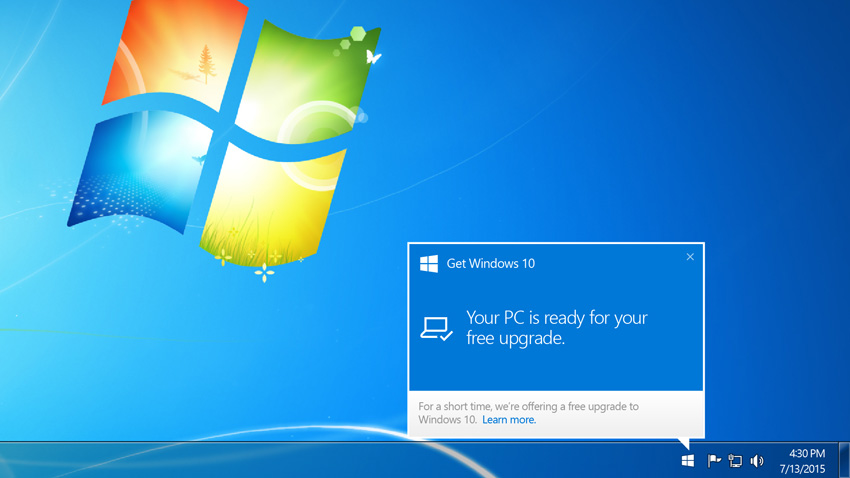 Because Windows 10 is here and I feel fine, this week’s other news includes Windows 10’s impressive day-one performance, the availability of Windows 10 Enterprise, Windows 10 FUD is laughably lame, getting it wrong—twice—about Microsoft’s Nokia purchase and its strategy for Windows and phones, Apple Watch is or isn’t a failure, Google loses to Microsoft in court, and Google says “non” to France.

Windows 10 day one: over 14 million upgrades

So just 1,486,000,000 to go! Microsoft announced on Thursday that it saw over 14 million people successfully upgrade to Windows 10 in its first 24 hours of availability, a pretty impressive figure given that the firm is phasing in the upgrades. “We still have many more upgrades to go before we catch up to each of you that reserved your upgrade,” Microsoft’s Yusuf Mehdi said. “Rest assured we are working 24×7 to continue the upgrade process and are prioritizing the quality of your upgrade experience over anything else. We are grateful for your excitement and enthusiasm and we appreciate your patience over the days and weeks ahead as we carefully roll out Windows 10 in phases to all of you that have reserved.” Sounds like a great start.

“Only in Seattle: Meet the guy with a custom-designed Windows 10 Seahawks jersey”

Well, duh. No one else on earth cares about the Seahawks at all.

While most of the excitement around Windows 10 has focused on consumers for whatever reason, it is arguably business adoption of this new OS that will determine whether it’s ultimately successful. And on that note, Windows 10 Enterprise is now available, with a 90-day evaluation version for anyone interested in giving it a spin.

With Windows 10 launching this week, the nutjobs have come flying out of the woodwork spouting nonsense, all of which, happily, is easily refuted. First, we were told that Microsoft’s “free” Windows 10 upgrade would come with subscription fees after 2-4 years, despite what Microsoft was saying. Nope: Windows 10 is free, not “free.” Then, we were told that a new Windows 10 feature (really a feature that debuted last year in Windows Phone 8.1) called Wi-Fi Sense would secretly let your PC share your secret Wi-Fi passcodes with friends. Nope: Wi-Fi Sense is opt-in and requires Windows 10 devices; no sharing of codes ever happens. And now we have the best one: privacy nuts are on fire because of a clause in the Windows 10 EULA which supposedly states that “you give Microsoft very broad power to collect things you do, say and create while using its software [and that] Windows 10 will be reporting back many things that you do, to the Microsoft servers back at Redmond.” Guys, seriously. Use Linux if you must. But don’t drag down the rest of us with your nonsense.

At long last? Maybe an update to your English language usage could arrive too.

There’s an interesting article in the New York Times this week that correctly declares Microsoft’s $7.5 billion purchase of Nokia an outright disaster. I’ve written much the same thing, and long ago, and while there’s no new information in this article per se, it misses a salient point about the purchase that virtually everyone seems to miss. And that’s that Microsoft had no choice. Had it not purchased Nokia’s devices and services businesses, Nokia would have turned to Android and dropped or deemphasized Windows phone, irreparably harming the platform (given that Nokia has long accounted for over 90 percent of all Windows phone sales and usage). So in buying these businesses from Nokia, Microsoft wasn’t wasting $9.5 billion or whatever the final tally is including all the write-downs and other fees. It was buying security for a key platform. So while Windows phone has of course failed—it was always going to fail—Microsoft can now keep it in market, continue its manufacturing expertise, and then merge it with the more popular “big” Windows platform in Windows 10. Buying Nokia wasn’t about failing. It was about Windows phone—no, Windows—being given a chance to live and fight another day. Mission accomplished, folks. And like everything else important in life, it came at a cost.

That same article includes an absolutely clueless quote from Nicholas Economides, an economics professor at the Stern School of Business at New York University who specializes in network economics and electronic commerce. He clearly doesn’t specialize in Microsoft or its history, however. “Microsoft’s grand scheme was to have a single platform that ran on PCs, laptops, tablets and phones, and to be able to sell applications that run Windows,” said. “That failed.” No, Nick, it didn’t. That vision is happening right now with Windows 10, it didn’t happen in the past with Windows phone or Nokia. And since Windows 10 just launched—literally two days ago—I think it’s a bit premature to say the strategy has failed. It’s just getting started. Jerk.

This week in “Is Apple Watch a Flop or Not?”

Arm-chair analysts seem very interested in definitively ruling on the success of Apple Watch, even though the product is being rolled out in measured form, over a period of time, much like Windows 10. My take on this is as simple as it is fair: Apple Watch will never see the success of Apple’s big bang products like iPod, iPhone or iPad, but it is already, by far, the best-selling wearable computing device of all time. But according to various reports—or what the UK Mail Online hilariously calls “new figures”—Apple Watch has fallen off a cliff, with the firm selling as few as 4,000 devices per day, a small percentage of the 200,000 or so a day it was selling at launch. Yes, analysts are revising their sales estimates downward, but I think we need to relax on this one. Apple Watch is what it is, and it was never going to disrupt the world like some previous Apple products. That doesn’t mean it can’t be successful.

“New version of Google Glass being ‘quietly distributed’ to workplaces”

Probably because the first Google Glass wearers were so obnoxious.

Google loses another round in court vs. Microsoft

Microsoft sued Motorola Mobility back in 2010, alleging that the smart phone maker was overcharging it for so-called standards essential patents, which are patents for technology that is so common and necessary that they command lower licensing fees. Motorola was then purchased by Google, which later jettisoned the company but kept the patents, so they adopted the Microsoft case and, after losing in court, appealed, arguing that those patents were in fact quite valuable. Nope. The 9th U.S. Circuit Court of Appeals in San Francisco has upheld the ruling, noting that the judge in the case had properly determined the patents’ value. Which is a royalty rate of $1.8 million, not the $4 billion—yes, billion—that Google was seeking. Suck it, Google.

On that note, I am ready to test my surface-to-drone rocket system.

You may recall that France asked Google to apply its “Right to be Forgotten” technology worldwide and not just limit it to EU countries. And that I thought this was a wonderful and obvious idea. Google disagrees. “We’ve worked hard to implement the right to be forgotten ruling thoughtfully and comprehensively in Europe, and we’ll continue to do so,” the firm notes in a blog post. “But as a matter of principle, therefore, we respectfully disagree with the [French data protection authority] CNIL’s assertion of global authority on this issue and we have asked the CNIL to withdraw its formal notice.” In other words, suck it France.

“Angry Birds Finally Gets a Sequel”

So those 13 other Angry Birds games didn’t count?