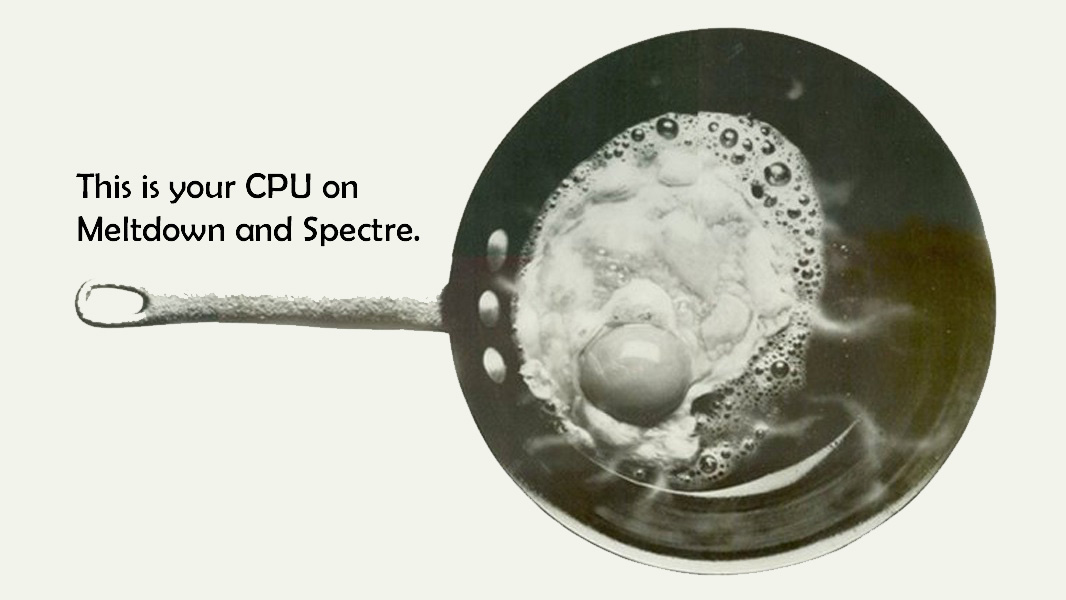 Because Meltdown and Spectre are the gifts that keep on giving, this edition of Short Takes looks at more news about these vulnerabilities, CES 2018, and more.

It’s been a fascinating couple of weeks. First, news of major security vulnerabilities in Intel microprocessors leak. Then Intel claims that concerns are overblown, is found to have lied about that, and then it doubles down on the lies. Meanwhile, after first claiming that there was “near-zero risk” to its microprocessors, AMD had to about-face because, get this, there is very much a huge risk to their microprocessors too. Put simply, these guys are terrible. And I wish we had other, more honest, choices.

“AMD processors: Not as safe as you might have thought”

Actually, I never thought they were safe.

Even Intel’s patches are buggy

Pity poor Intel, which handled the discovery of its flawed microprocessor designs with all of the elegance of Chris Farley in Chippendales. And then followed it up with more bungling. The microprocessor giant is now reporting that its firmware updates for older “Haswell” and “Broadwell” Core chips are causing “higher system reboots.” So Intel is working on yet another fix. “We are working quickly with these customers to understand, diagnose and address this reboot issue,” an Intel statement notes. “If this requires a revised firmware update from Intel, we will distribute that update through the normal channels.” Oh, it will. You bet it will. Mark my words: We’ll be fixing these flaws for years to come, and repeatedly.

“How to connect your phone to your Windows 10 PC”

Microsoft’s response to vulnerabilities suggests a divide with Intel

As a Microsoft guy, I am perhaps most interested in the software giant’s response to the whole CPU security vulnerability thing. And if I’m reading this right, it appears that Microsoft is throwing Intel under the bus. In a public statement addressing the vulnerabilities, Microsoft’s Terry Myerson described the “significant slowdown” and “significant performance impact” of the fixes these flaws would require. And it’s not hard to figure that those slowdowns will materially impact Microsoft. I’ve known for some time that the only reason Microsoft is bringing Windows 10 the ARM-based Qualcomm Snapdragon platform is so that Intel has some viable competition and an impetus to push forward more quickly than the monopolist has thus far done. This episode should help accelerate those efforts.

Of conspiracy theories and chipset vulnerabilities

And since we will never stop discussing these vulnerabilities, I feel obligated to point out that Intel CEO Brian Krzanich literally sold as much Intel stock as he could sell at the end of the quarter in which his company was first informed of the massive flaws in their microprocessors. He netted $39 million in the sale, and I assume this will result in an insider trading investigation by the SEC. Because, let’s face it: You don’t need to believe in the shadow government or UFOs to see what really happened here. I bet Krzanich exits Intel this year as a result of this fiasco.

Apple must thank God every day for Intel.

Brad and I headed to Las Vegas for the annual Consumer Electronics Show (CES) this past week, and there was a clear winner: Google Assistant, the search giant’s digital personal assistant technology, dominated the show, both thematically—there were Assistant ads everywhere in Vegas—and literally, given the sheer number of devices—smart TVs, smart speakers, smart displays, smart headphones, appliances, cars, and more—into which it will be integrated. This is bad news for Microsoft, which has exactly one Cortana-based device in the market, and for Amazon Alexa, which previously dominated this market. I expect Google Assistant to pull ahead for good in 2018. So if you’re wondering which assistant to choose, there you go. This battle is over.

I just said it did. Geesh.

For all of its bungling with Skype, its inability to make encrypted calls and chats has, perhaps, been the most vexing. But this week, Microsoft finally began testing this functionality, albeit only in the newer, mobile-based versions of the app. Microsoft calls it Private Conversations, and it appears to work a bit like an “incognito” tab in your web browser, where everything that happens there stays there, thanks to encryption. “After the recipient accepts your invite, all calls and messages in that conversation will be encrypted end-to-end until you choose to end it,” Microsoft notes. Right. That’s how Skype should always work.

I don’t even know you anymore.

And speaking of sucking, Facebook CEO Mark Zuckerberg said this week that his firm would change its news feed so that it is actually “good for people.” Anyone who uses Facebook can tell you this is a big strategy change, since the news feed seems uniquely designed to make people upset at the moment. “We feel a responsibility to make sure our services aren’t just fun to use, but also good for people’s well-being,” the Zuck said. “The world feels anxious and divided, and Facebook has a lot of work to do — whether it’s protecting our community from abuse and hate, defending against interference by nation states, or making sure that time spent on Facebook is time well spent.” As with Skype encryption, I have questions. Like, what took so long? And, obviously.

Because shareholders apparently prefer for the service to keep sucking.