Microsoft’s Next Windows Variant Must Be the Modern Thin Client

We are quickly approaching the tipping point where running software locally will become a legacy approach much like on-premises hardware. This, I believe, is true for both the consumer and the enterprise and if Microsoft does not play its cards right, the company may find itself in an awkward position where other platforms will outperform its own operating system.

Microsoft is pushing Windows 10 S as a modern version of Windows that will only run apps from the Windows Store and they claim this version of Windows will maintain optimal performance its entire lifecycle while also being more secure. This is fine as an in-between step for the evolution of Windows but it is not the correct long term solution to the “Windows” problem.

What is this problem? It’s the end goal for Windows. Where is it headed, what’s the longevity plan for the software and more importantly, how is Windows going to remain relevant in a world that no longer needs it to survive? These are the questions that Microsoft must answer if the company wants to retain its position as the platform authority for productivity.

You may write-off that ChromeOS is not a threat to the enterprise but that platform is very close to being a modern thin client; relatively lower-power hardware and nearly all tasks are performed through a web browser. Microsoft does not have a response to the growing threat of what Google is building and if you think it’s Windows 10 S, it’s not.

Windows 10 S is what happens when you take a massive platform like Windows and artificially limit its capabilities. It’s not a re-write, a new approach, or even lightweight version of Windows 10, it’s Windows with fake walls for security and performance.

What Microsoft needs to build is the modern-thin client. This type of content delivery is not new but what has changed is that we now have the ‘cloud’, high-speed internet is widely available in the corporate world, and low-cost but powerful hardware that runs on ARM. It may seem absurd to build an OS that runs in the cloud and delivered over the internet to a specific set of hardware but it’s really not all that far fetched.

Nearly every modern computing device, a smartphone, laptop, or desktop is connected to the Internet 24hrs a day and has a high-speed connection. We know this model is viable as that’s exactly how a Chromebook operates which are quickly growing in popularity with schools and some consumers.

Imagine how Microsoft could improve upon the Chromebook; a cloud operated version of Windows that streams down Store apps (or even classic apps) to local hardware while also offering local browser support. In short, a thin version of Windows that only has a browser, a start menu to open progressive web apps and streams everything not run on the web to your thin device.

This may seem difficult as latency may be an issue and there are dozens of other reasons why this may not be viable for everyone but for those who have high-speed connections, this is certainly a plausible path forward. Further, for Microsoft, this allows them to modernize Windows, make sure everyone is always ‘patched’ and remove the legacy infrastructure that Windows has outgrown. 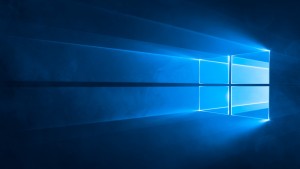 If Microsoft stopped developing Windows 10, aside from security patches, would much change in the world? I don’t think so, Windows 10 hasn’t slowed the progression of Chrome OS nor has it slowed the massive adoption of Android and iOS. Further, it hasn’t stopped the growth of the Chrome browser and the cloud would still exist today as well.

Right now, Microsoft doesn’t have a response if iOS becomes a desktop-class operating system or if Chromebooks become viable in the enterprise in a browser-only world. The company’s ‘modern’ mobile OS, Windows 10 Mobile, has failed and left the company in a position where it is scrambling to figure out how it will keep Windows alive into the next decade.

If you think two Windows 10 updates per year are going to add awesome features that will bring back millions of users to Windows for the desktop, you are delusional. Windows should be in a maintenance mode at this point with the company devoting all available resources to spinning out a version of Windows that will run on modern low-cost hardware.

A thin version of Windows that runs in Azure and is delivered locally over the Internet is exactly what Microsoft needs to be building for the next generation of desktop computing. And if you are thinking this sounds impossible, remember that the company’s Office, Dynamics, and other software already has a version that runs in the browser.

The challenge is what to do with classic x86 apps? We have already seen that streaming the apps is a possibility with the HP Elite X3 and Continuum; the technology exists today but it’s a matter if Microsoft can bring it to the mass market in a way that does not feel like the industry is taking a step backward.

Of course, this type of Windows will not work in a place with slow connectivity but neither do smartphones or Chromebooks. Connectivity is another challenge but much of the world also has high-speed access and a thin version of Windows would be sufficient for these users.

Yes, niche cases like gaming, video production, and other high-end computing applications will need local hardware for the foreseeable future. But for those who use their PC for Office, email, and browsing the web, a thin version of Windows is more than sufficient.

As Microsoft looks to extend the longevity of Windows, the company needs to start thinking outside the box. The world of computing is evolving than faster than Microsoft is changing Windows and if they fail to adapt appropriately, they may find themselves on the outside of the next computing revolution once again.