Microsoft to Bring Back Start Menu in Future Windows 8.1 Update 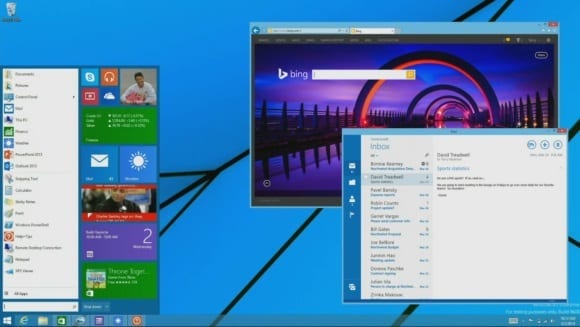 Microsoft has made a lot of announcements at their Build Developer Conference this week, including the official unveiling of  Windows 8.1 Update, Windows Phone 8.1, and a number of development-related updates, including open-sourcing their ‘Roslyn’ compiler and introducing universal Windows apps. Keith Ward over at Visual Studio Magazine has a nice developer-focused recap of the big developer announcements at Build, and he argues that 2014 could be a watershed year for Microsoft developers.

Yet arguably one of the biggest bits of news to come out of Build 2014 was a brief mention (and demo) during the Day 1 keynote that went off like a bombshell: Terry Myerson, executive video president of Microsoft’s Operating Systems Group, said that Microsoft was finally bringing back the start menu functionality that desktop users have been clamoring for. You can catch Myerson’s comments about the new start menu beginning at the 2:08:55 mark in the recorded video of the Day 1 Build keynote on Microsoft’s Channel 9. Yes, that’s correct: That would be just past the two hour mark, as Microsoft clearly had a lot it wanted to share with Windows developers.

The start menu returns: Microsoft says that a new start menu will soon be available to Windows 8.1 users. (Source: Microsoft)

“There are more than 1.5 billion PC users, and hundreds of millions of PCs sold every year, and the primary experience for many users is the keyboard and mouse,” Myers said. “We’re going all-in with this desktop experience…for starters, we are going to enable universal windows applications to run in a window. And we’re going to enable your users to find, discover, and run your windows applications with the new start menu.”

Myerson then briefly demonstrated the new functionality of the future start menu, which allows users to find programs–including live tiles and modern applications–by using the same type of UI functionality that billions of PC users have become accustomed to. Myerson wasn’t very clear about exactly when the update would be available, instead saying that Microsoft would “…be making this available to all Windows 8.1 users as an update. We think [there will be] a lot of happy people out there.”

Myerson’s comments seem to indicate that the new start menu wouldn’t be part of the just-announced Windows 8.1 Update, but would likely be added in a future (and unnamed) update after that one. I’ll update this post with new information as it become available.

So are you (or your end-users) looking forward to the return of the Windows start menu? If so, let me know what you think. Drop me an email or touch base with me on Twitter, Google+, or Facebook (see below).