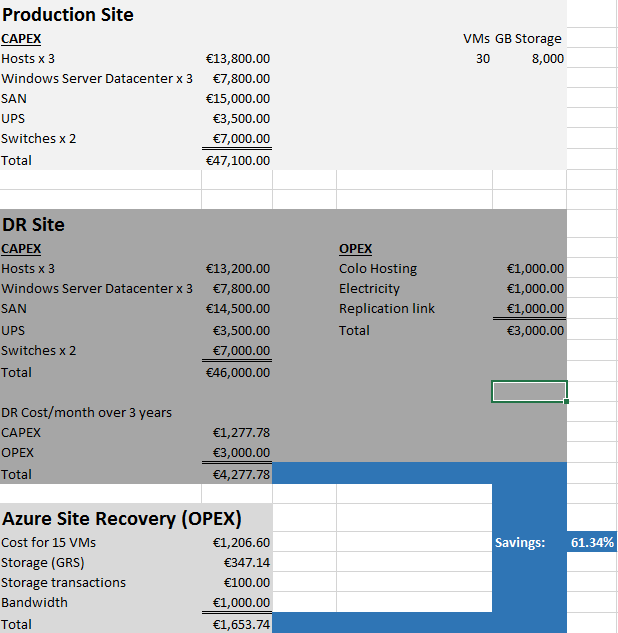 The Need for Disaster Recovery Sites

Every disaster in the news reminds us that we need to deploy a disaster recovery site and prepare a business continuity plan. Microsoft gave us built-in virtual machine replication in Windows Server 2012 (WS2012) Hyper-V in the form of Hyper-V Replica (HVR). Microsoft designed HVR to provide us with:

In particular, Microsoft designed HVR for small-to-medium enterprises (SMEs) with the ability to scale up. It was great that Microsoft gave SMEs a replication tool for free, but the problem for most organizations of this size is that they don’t have a place to replicate to.

Microsoft launched ASR in January of this year to very little applause. At the time, the product offered orchestration of replication and failover between a customer’s own Hyper-V hosts in their own primary and secondary sites. Later in the year, Microsoft expanded ASR to include the ability to use Azure as the disaster recovery site, which sounded great. Microsoft talked about how ASR would be fantastic for businesses to replicate Hyper-V VMs into Azure. In other words, Azure would become the disaster recovery site. But there was one problem. ASR required that customers had deployed System Center Virtual Machine manager (SCVMM) to manage their on-premises Hyper-V hosts, fabrics, and virtual machines. While SCVMM is great for mid-to-large enterprises, Microsoft forgot two important factors:

Microsoft had effectively closed the doors on the large percentage of the market that had Hyper-V and required an affordable disaster recovery solution that Azure could offer.

On December 11, Scott Guthrie, Executive Vice President of the Cloud and Enterprise group in Microsoft, announced that Azure Site Recovery would now support replicating Hyper-V virtual machines without requiring SCVMM, referring to it as “Disaster Recovery (DR) to Azure for Branch offices and SMB.” SMEs, the part of the market that struggles most with the cost of a disaster recovery site, finally have an affordable way to implement business continuity by using Azure as their disaster recovery site in the cloud, with all the same one-click orchestrated test, planned and unplanned failover functionality that the Fortune 1000’s can get in Azure.

How Affordable Is Azure Site Recovery?

On the face of it, ASR might seem expensive. I sat down before writing this article and developed a scenario with a fictional customer that has three Hyper-V hosts that’s configured in traditional cluster with a SAN and hosts 30 virtual machines. I used typical Irish (Euro) pricing in this scenario, because those are the rates I know, and I worked out the cost of two disaster recovery solutions:

I calculated the monthly costs of each solution. In the case of the hosted disaster recovery site, I divided the CAPEX costs by 36 to spread the investment over three years. Note that the trickiest part of this was to price the cost of storage transactions, but that cost is tiny so there is a lot of room for error.

The result says a lot. This fictional customer can get a traditional hosted disaster recovery site for around €4,277 per month, but they’ll need to pony up €46K of capital investment up front to build the disaster recovery site. Getting that sort of cash is a challenge for a SME even when the economy is doing well.

If that customer went with Azure as their disaster recovery site, then the solution would cost around €1,653 per month. That is not only 61 percent cheaper per month, but there is no need for any capital investment. This is a more manageable operational cost and under open licensing, there is no long-term commitment that the customer cannot divorce themselves from.
In my opinion, the launch of ASR without requiring SCVMM will be a hot feature of Azure to watch in 2015 for SMEs and Microsoft partners that operate in that space, and the temperature will only increase when Microsoft adds replication-to-Azure support for vSphere.