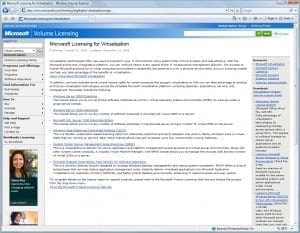 It never ceases to amaze me just how quickly server virtualization went from being a novelty to being a technology that almost everybody uses. For decades a server could be defined as a physical computer that was running a server operating system, and possibly a set of applications. This rather simplistic definition meant that licensing for a server was also usually pretty simple. There were exceptions to every rule, but generally speaking, you needed a license for the server’s operating system, and for any applications that were running on the server. Sometimes you might also require client access licenses, but even that wasn’t all that difficult to figure out.

Licensing gets a little bit trickier when you throw server virtualization into the mix, because suddenly there are multiple operating systems to consider. Unfortunately, there is no one single standard licensing model for virtualized environments. Every virtualization software vendor has their own licensing model. Even so, I wanted to try to shed some light on some of the issues that you will encounter when licensing virtualized servers by talking about Microsoft’s licensing policies.

Believe it or not, there are some licensing provisions which actually allow you to run Windows Server 2008 for free! Well, not completely free. You still need a license. In many organizations though, the costs of the Client Access Licenses (CALs) far outweigh the cost of the server license, and there are situations in which Microsoft does not require you to purchase CALs for Windows Server 2008.

The general of thumb on Windows Server 2008 CALs is that if the server is only acting as a Hyper-V host machine, then you don’t have to purchase CALs for it. You are allowed to run support services on the server, such as failover clustering, but you can’t run any applications that aren’t specifically related to virtualization, or a CAL will be required. Furthermore, the virtual servers that are being hosted on the server must be running an operating system other than Windows Server 2008. If any of the virtual servers are running Windows Server 2008, then a CAL is required.

Actually the deal is a little bit better than that. When you purchase a Windows Server 2008 Enterprise license, you are actually entitled to use that license for the host operating system, and for up to four virtual servers that are running on the host. That’s five licenses for the price of one!

Keep in mind, you still have to purchase CALs. Remember though that Microsoft’s licensing model allows you to purchase CALs on a per user basis. That means that as long as your user count remains steady, you don’t have to purchase any additional CALs just because you have added another Windows 2008 server (or virtual server) to the network.

The terms of the server license is even better if you are running Windows Server 2008 Datacenter edition. When you purchase a Datacenter Edition license, you are entitled to run an unlimited number of virtual server operating systems on the host server.

Microsoft has actually adapted the licensing requirements of many of their server products to virtualized environments. They have created a special web page at that provides you with all of the details. As you can see in Figure A, the page gives you a very quick, simple explanation of the licensing requirements for each product, but provides you with a link to more detailed information.

Microsoft has adapted their licensing policies for many of their server products.

As you can see, determining your licensing obligations becomes a little bit trickier in a virtualized environment. Even so, you usually end up coming out ahead on the licensing costs if you do end up virtualizing.