A Guide to Windows 7 Network and Sharing Center 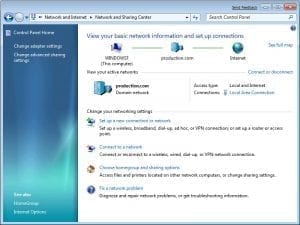 I can’t seem to recall where I saw it, but I read a review last week of the Windows 7 beta in which the reviewer described Windows 7 as Windows Vista with a fresh coat of paint. In some areas this is a fairly accurate description, especially if you are looking at some of the pre beta builds. Gradually though, Microsoft has been making changes to Windows 7 that make it look a little bit less like Windows Vista.

The Network and Sharing Center

This is what the Windows 7 Network and Sharing Center looks like. 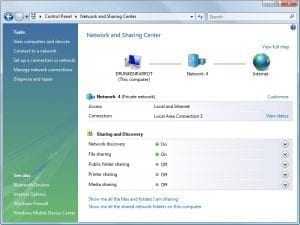 This is the Windows Vista Network and Sharing Center.

The first change that I really like is the View Your Active Network option. As you can see in the figure, the Windows 7 version clearly displays which network you are connected to. In this case, it’s a domain network named Production.com.

If you look a toward the bottom of the screen, you will notice a link labeled Connect to a Network. If you click on this link, Windows will display a dialog box that wells you which network you are connected to (just like the main screen does). More importantly though, this dialog box contains a change button. Clicking the Change button gives you the option of connecting to any other network connection that you have defined.

If you look at Figure B, you can see that the Windows Vista Network and Sharing Center listed all of your Sharing and Discovery settings on the main screen.  These settings have been moved in Windows 7. To access them, you must click the Change Advanced Sharing options.

If you look at Figure C, you can see that Windows 7 maintains three separate network profiles (Home or Work, Public, and Domain), and maintains separate sharing settings for each of the profiles. Another thing that I like about this screen is that it clearly identifies which profile Windows is currently using, so that you will know which of the sharing settings currently apply. 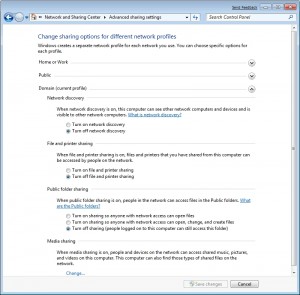 In Windows 7, Microsoft seems to be placing a greater emphasis on peer networking, and has started to acknowledge that home networks are becoming much more common. If you look at Figure A, you will notice an option labeled Choose Homegroup and Sharing Options.

This feature isn’t really all that useful on domain networks, but the basic idea behind it is that if you are connected to a workgroup, you can create a homegroup, which is used for sharing documents and other resources with other computers on the network. You can see what the HomeGroup screen looks like in Figure D. 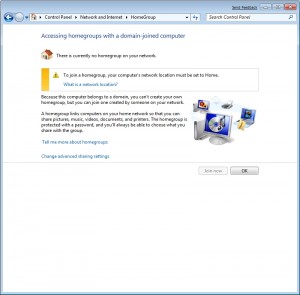 It’s still too early to know for sure what the Windows and Sharing Center will look like when Windows 7 is eventually released. At this point though, there are several elements that seem to be identical to their Windows Vista counterparts. These components include the Change Adapter Settings, Fix a Network Problem, and the Setup a New Connection or Network functions.