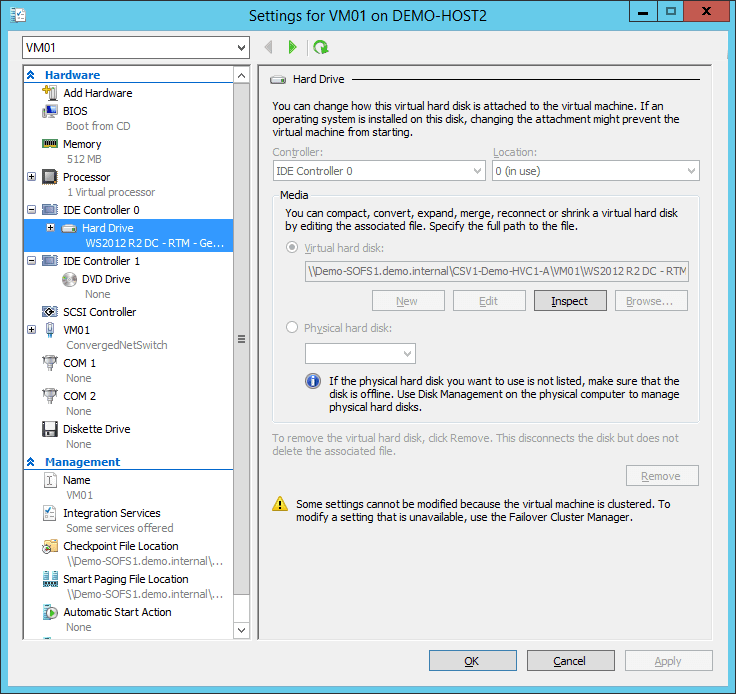 In this post I will explain the role and types of storage controllers that are included in generations 1 and 2 Hyper-V virtual machines. Windows Server 2008 R2 Hyper-V was not considered for this article.

What Does a Virtual Storage Controller Do?

Like IDE in a classic PC, each IDE controller has two available channels, known as locations in Hyper-V. You can think of these locations as targets. If you check the BIOS settings of a generation 1 virtual machine, you will see the CD is first and IDE is second. That IDE entry refers to location 0 on IDE Controller 0. In a generation 1 virtual machine, the boot disk that will contain the OS must be connected to location 0 on IDE Controller 0.
This fact was used by Hyper-V haters in the early days of Hyper-V: “How could an enterprise virtual machine use an IDE controller?” The fact was that it was a logical connection and nothing more. Ben Armstrong (aka the Virtual PC Guy, and principal program manager lead of Hyper-V) explained why the use of an IDE controller made no impact on performance.
The simulated DVD drive is also attached to the IDE controller. Note that this device allows you to mount ISO files and to pass through a DVD drive in the host (which you rarely find these days). 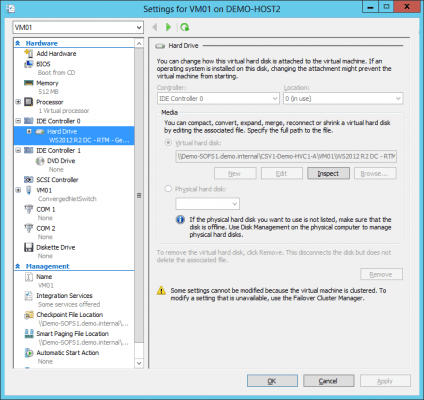 The default controllers of a Hyper-V generation 1 virtual machine.

A strongly recommended best practice is for generation 1 virtual machines to be created as follows:

By default, you do not get a virtual DVD drive. You can add a virtual DVD drive to a SCSI controller in the virtual machine. Note that this DVD drive supports only ISO images; you cannot pass through a physical drive. That’s not really such an issue. Who pays extra for DVD drives in their hosts? Most software is downloaded in ISO format. And we typically store/share those ISO files from some kind of file share library, such as System Center Virtual Machine Manager (SCVMM). 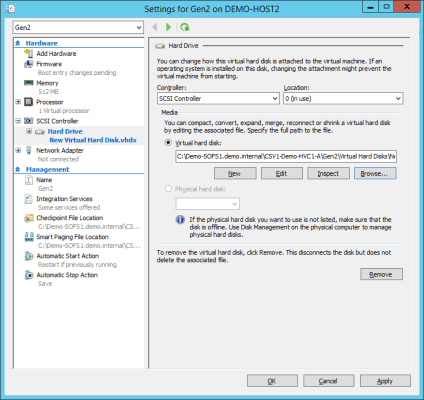 While we have generic best practices (as documented above), you should always consult the virtualization guidance of your operating system, OS role/feature, or application for the best practices of that software.
For example, Active Directory had to deal with a peculiar issue as documented in KB2853952. Before the KB2855336 update rollup for WS2012, the IDE controller of a virtual machine running on WS2012 Hyper-V incorrectly reported that IDE controller write caching was disabled. This could lead to corruption issues if you installed a virtual domain controller on a VM on WS2012 and used the default AD database paths on the C: drive. Best practice was to store the AD databases on a D: drive that was attached to a SCSI controller (Microsoft Azure still requires this). The KB2855336 update rollup for WS2012 corrected the behavior of the IDE controller so that storing the AD databases on the IDE controller (the default C: drive location) would trigger write-through and prevent database corruption.