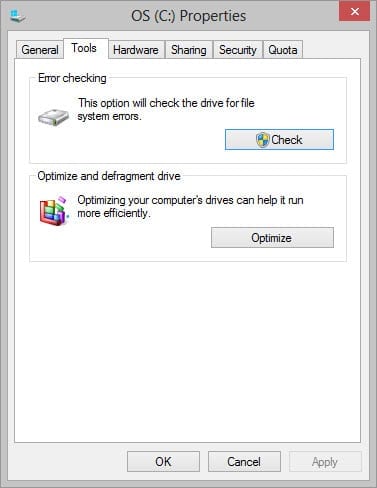 Help! How do I fix disk errors in Windows 8 and Windows Server 2012?

If the errors are verified to be genuine, an online scan of the volume catalogs the issues so that they can be fixed at a later point without scanning the entire volume offline. In Windows 8, chkdsk scans are automatically scheduled to be performed during a maintenance window, i.e. when there is low CPU and disk activity. When an offline chkdsk repair is required, users will be notified via the Action Center. In Windows Server 2012, administrators can choose to schedule scans at an appropriate time.

If an offline repair is required, chkdsk can perform a spotfix using the list of catalogued errors from the scan. This works much faster than in previous versions of Windows, where offline disk repair times were proportional to the number of files on the volume, and not to the number of corrupt files.

If a scan has identified that an offline repair is required, you can run a spotfix repair using the new chkdsk switch, where d: is the letter name assigned to the volume to be scanned:

Additionally, while it shouldn’t be necessary, you can manually force a volume scan:

If the volume being repaired contains the OS boot files, you will be asked to restart the operating system to complete the operation, but repairing data only volumes doesn’t require an OS restart. In Windows 8, users can reboot the OS to fix corruption errors logged during a scan on both data and system volumes.