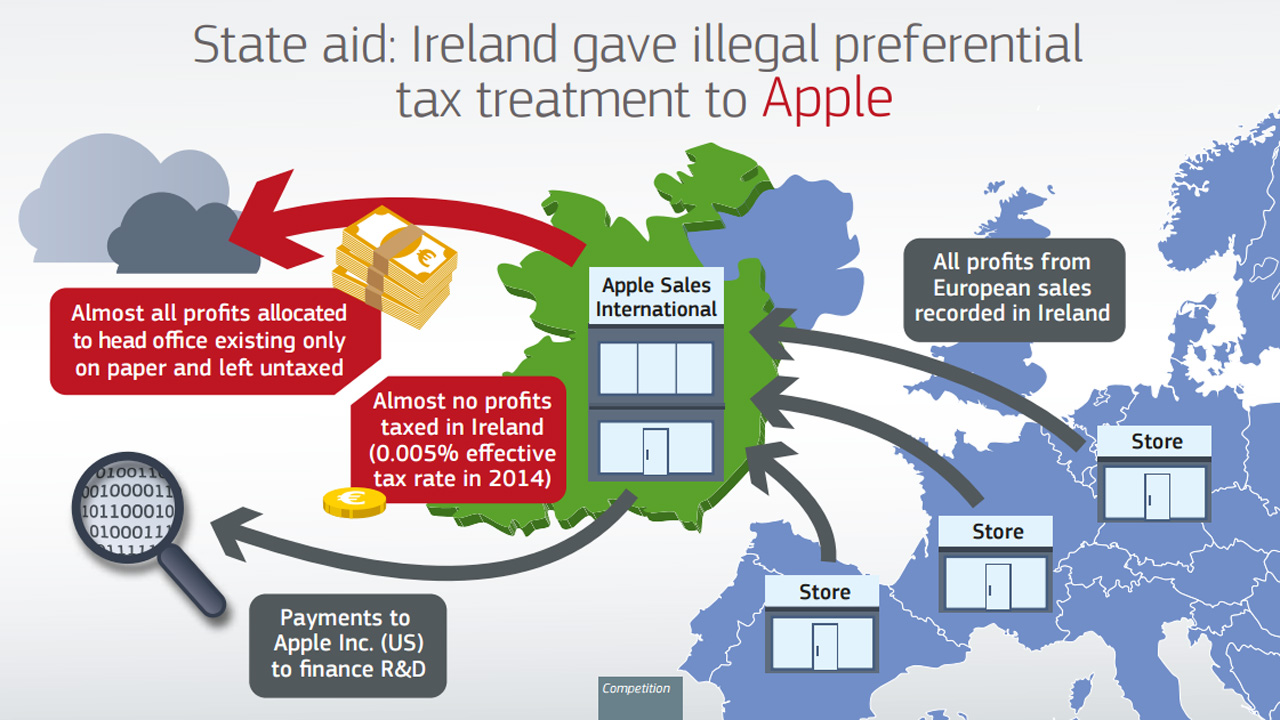 A European Union investigation has concluded that Ireland illegally taxed Apple at a rate of just 1 percent for over 10 years. As a result, it has ordered Ireland to collect $14.5 billion in lost taxes from the consumer electronics giant.

“Member States cannot give tax benefits to selected companies,” EU Competition Commissioner Margrethe Vestager said in a prepared statement. “This is illegal under EU state aid rules. The Commission’s investigation concluded that Ireland granted illegal tax benefits to Apple, which enabled it to pay substantially less tax than other businesses over many years.”

Apple’s sweetheart deal with Ireland has been an open secret for years, and Apple has been funneling profits earned around the world through this country since 2003. And while Apple isn’t the only tech giant to find tax success in Ireland, it is by far the biggest.

Apple, of course, says it is simply taking advantage of legal tax breaks.

“Apple follows the law and pays all of the taxes we owe wherever we operate,” the company noted in a statement. However, Apple also changed its tax structure in Ireland in 2015, once in became aware of the EU investigation.

And Ireland—which is the actual target of the EU action—said that it would appeal.

“I disagree profoundly with the Commission’s decision,” Irish Finance Minister Michael Noonan said. “[We will] defend the integrity of our tax system.”

Ms. Vestager isn’t impressed by either opinion and says that the EU has enough evidence of wrongdoing to survive any legal challenge. And her European Commission has already had success with what’s known as a tax “claw backs,” where the EU retroactively requires a member state to recover taxes that were lost to sweetheart deals with a corporation: She has already ordered Luxembourg to reclaim $33 million in taxes from automaker Fiat, and a similar amount from Starbucks. And the EC has other claw back cases pending against Amazon and McDonalds.

“Profits should be taxed where profits are made,” she said this week.

The EU’s investigation of Apple’s deal with Ireland dates back to Ms. Vestager’s ineffective predecessor, Joaquin Almunia. And it was prompted by a 2013 US Department of Justice investigation that found that Apple, the world’s most successful company, was bolstering its bottom line by sheltering profits internationally, in countries with the lowest possible tax rates.

In an interesting twist, the DOJ last week warned the EU not to attempt to collect owed taxes from Apple, charging that it was unfairly targeting US companies. And the Justice Department has support from the White House and other governmental agencies here.

“Retroactive tax assessments by the commission are unfair, contrary to well-established legal principles, and call into question the tax rules of individual Member States,” US Treasury Department spokesperson said in a curious bit of overreach.

But Vestager has an answer for the US government complaints as well: Instead of telling Europe how to apply taxes, perhaps the United States could step up and tax US-based corporations fairly as well.

“The amount of unpaid taxes to be recovered by the Irish authorities would be reduced if the US authorities were to require Apple to pay larger amounts of money to their US parent company for this period to finance research and development efforts,” she said. “These are conducted by Apple in the US on behalf of Apple Sales International and Apple Operations Europe, for which the two companies already make annual payments.”

Apple, of course, has no intention of bringing any profits back to the United States, since doing so would in fact require a hefty tax payment.