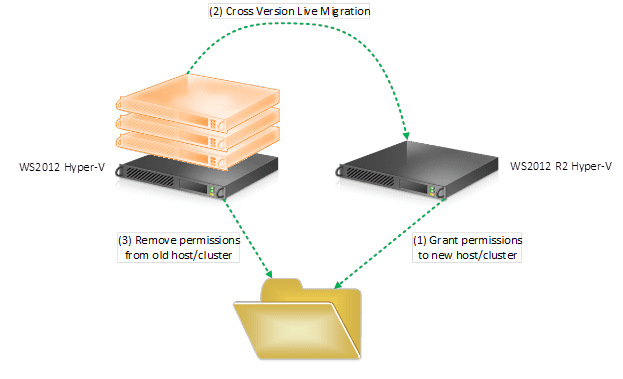 Now that you can purchase Windows Server 2012 R2 (WS2012 R2), it’s time to consider how you will upgrade to the newest version of Hyper-V. In this article I will discuss a new strategy for upgrading from WS2012 Hyper-V to WS2012 R2 Hyper-V using a new feature called cross-version live migration.

It’s the same answer every time!

There are two ways to use cross-version live migration, each of which leverages a features of live migration from WS2012 Hyper-V.

You can store virtual machines on WS2012 (or later) file servers, including the scalable and continuously available Scale-Out File Server. Changing the possible owners of a virtual machine is basic Windows administration: 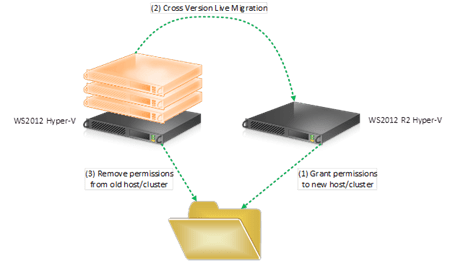 There are two notes with regard to live migration to or from a Hyper-V cluster:

Some companies that deployed WS2012 Hyper-V in recent months chose to use SMB 3.0 storage (including SANs that were abstracted by scale-out file servers) for their Hyper-V hosts/clusters, because this option allows a very simple migration to newer hosts with no downtime to service availability. An added benefit of this approach is that there is no need to invest in new storage capacity; the existing investment is retained without expansion because the VM’s files are not being moved – only the ownership of the virtual machines is moved in this process.

The ability to move the virtual machine’s files means that you can use direct-attached storage (DAS) or internal disk in the source and destination non-clustered Hyper-V hosts. You could also introduce new cluster shared volumes (new SANs or SAN LUNs) when moving to a new WS2012 R2 Hyper-V cluster.

This option will not be as fast as cross-version live migration with SMB 3.0 storage. The time required depends on several factors, including:

This means that while there is little human involvement in this zero-downtime migration, it might take some time to move lots of virtual machines from WS2012 Hyper-V to WS2012R2 Hyper-V, and that might be an issue if your older infrastructure is not healthy.

There are reasons not to use cross-version live migration. Consider the following:

Those who are considering the following will like cross-version live migration:

There Will Be Downtime

Cross-version live migration makes it possible to move your VMs onto WS2012 R2 Hyper-V with no downtime, but your upgrade project is not complete. There are still two steps to perform – one of which is very important and should be done, and the other which should be considered.