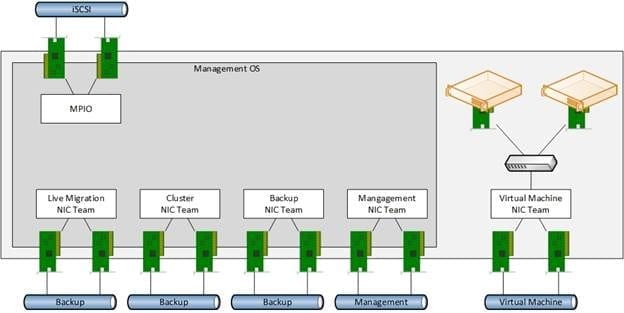 What Are Converged Networks?

In a previous article, I discussed Hyper-V host networking requirements. Usually in Windows Server 2008 (W2008) or Windows Server 2008 R2 (W2008 R2), each network required a NIC or a NIC team. That increased costs, complexity, and was a cabling nightmare. 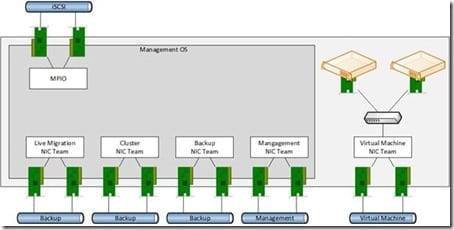 The networks of a W2008 R2 clustered Hyper-V host with iSCSI storage.

Customers may have come up with alternative ways to deploy these networks using hardware solutions. Using these tools you could take 2 * 10 GbE connections to the server and divide them up into 1 GbE connections. While this reduces the amount of cabling and complexity, it still presents a problem.

Windows Server 2012 introduced the ability to converge these many networks or fabrics (a cloud term) that are required by a server, such as Hyper-V, into fewer, higher-capacity networks and to divide up that bandwidth to serve the needs of the network requirements of that server. For example, the previously illustrated example could be deployed as follows: 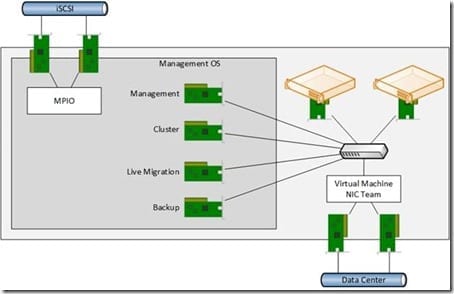 A WS2012 Hyper-V host with converged networks and iSCSI storage.

Virtual NICs provide the connections required by the host’s Management OS for management, cluster communications, Live Migration, and backup. These are connected to the physical network via the virtual switch. The Management OS connections share bandwidth of a single high bandwidth NIC team (2 * 10 GbE NICs or lots of 1 GbE NICs) with the virtual machines.
This software solution is:

The following design could be deployed on a server to make a WS2012 R2 Hyper-V clustered host with just four NICs. Two NICs are RDMA enabled (rNICs) and will be used for the 2 cluster private networks. The rNICs are not teamed and operate on two different subnets or VLANs. SMB 3.0 Multichannel will aggregate the bandwidth and power features like storage and Live Migration. The other two NICs are teamed, and used to connect virtual NICs to the physical network via the virtual switch. 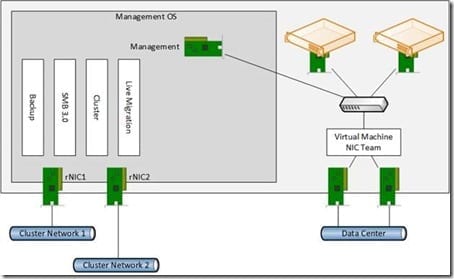 There are a number of features that make converged networks possible. Not all are required in a design, but they can open up possibilities:

There is no one right way to build a converged networks design for a server or a Hyper-V host. There are wrong ways, depending on the features that are required, such as SR-IOV, RDMA, RSS or DVMQ. Converged networks provide more flexibility, easy-to-deploy software-based networking, and introduce a more economical way to deploy higher capacity and feature rich networking.