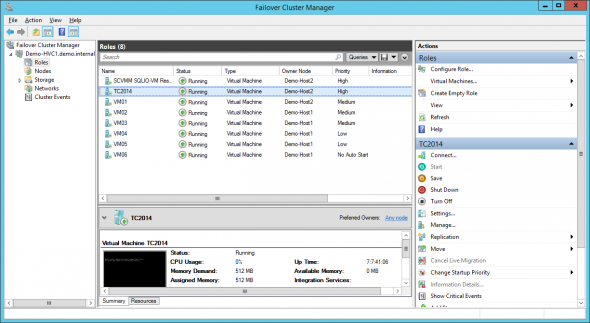 Each setting has a numeric value shown above, where this value is stored with the cluster group that is used by Failover Clustering to manage the HA virtual machine. You can set a virtual machine with a low priority using the following example:

In theory, it is possible to use interval values such as 1500. However, this is not supported and will lead to unpredictable results. In other words, only use the values that Microsoft provides: 3000 (High), 2000 (Medium), 1000 (Low), and 0 (No Auto Start).
You can quickly report the priorities of virtual machines using this snipped:

As you can see, configuring this feature is easy, but what are the effects of configuring a virtual machine priority?

The most common usage of virtual machine priority is to model the dependencies of guest services. A simple example is tiered application:

Using this dependency tree, the virtual machines are prioritized: 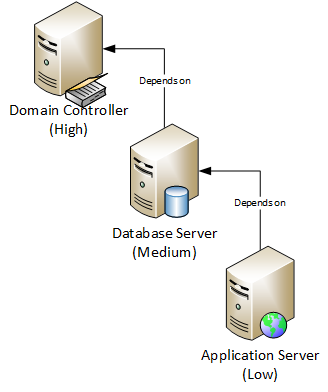 Imaging that all three virtual machines are running on Host1, where the host suffers a sudden failure. This is when the cluster heartbeat and failover process kicks in. Other nodes in the cluster detect that Host1 is offline when it fails to heartbeat. The other nodes will initiate a failover process and the virtual machines are failed over and started in this order:

Note that this is a simple process. It does not verify that guest services are functional before starting the dependent virtual machines. And we are also restricted to just three tiers — high, medium, and low — for our multi-tiered applications.
I think that last sentence gives away what Microsoft’s developers were thinking when they created the priority feature. This feature is for more than just modeling applications. In fact, I think this modelling capability was low on the ladder when the feature was designed.

We can drain a clustered host of virtual machines in two ways: