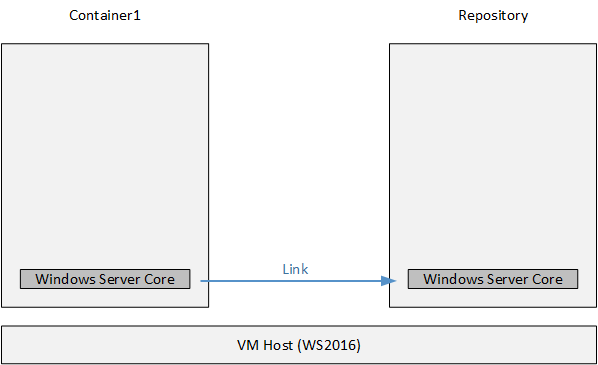 The objective of Windows Server Containers is not to provide another way to deploy legacy applications. If you have traditional applications that have their own machine, local persistent storage, and is authenticated using Active Directory, then you should use machine virtualization technologies such as on-premises Hyper-V or vSphere, or public clouds, such as Azure or AWS.
Containers give us the ability to deploy a service from a reusable template in seconds. No matter how many times you deploy from that template, you will get the same result. If you’re working in software development or DevOps, then this should be music to your ears.

There are a number of terms to understand with Windows Server Containers:

Building Containers from the Repository

You can understand the security and viability of Windows Server Containers a bit more once you understand how the repository is used. The repository is a library and everything is not just built from that library, but it is linked to that library. Let’s look at how the process works in TPv3.
Building a container starts with creating a new container using an image from the repository as a source. In Windows Server Containers, you will start with an image called WindowServerCore. This process does not copy the image from the repository to the container; instead, the new container links to the image in the repository. It is this linking that makes containers so fast at deploying services.
You can start the container and start to make changes. Anything you do make are stored persistently with the container — containers are not stateless, but they are not the same as virtual machines, either. 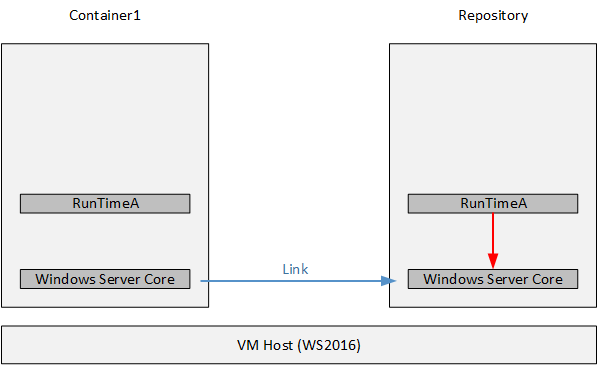 Let’s put aside that first container for a moment and create a second container. Imagine this scenario: I am a developer, and I want a container with RunTimeA. I select RunTimeA as the source image. Because there is a dependency on WindowServerCore, both the child and the parent images are used to create the container. And once again, no images are moved or copied. Instead, a link is created from the second container to the original images in the repository, and all changes are stored in the container. 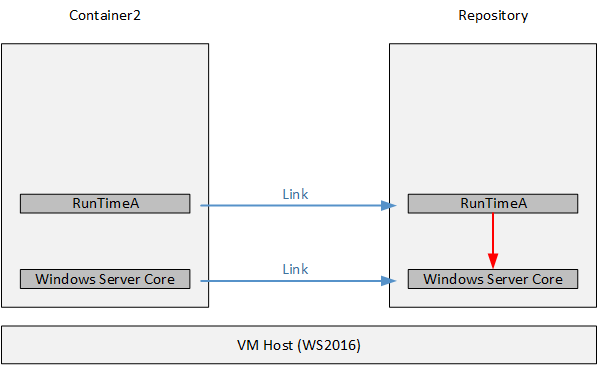 That developer wants to be able to develop, test, and deploy a new application called CRMZ. The dev connects to the second container and deploys CRMZ. They shut down the container and create a new container image, which stores the changes caused by the software installation. The new container image, CRMZ, has a child-parent relationship with RunTimeA, which in turn has a child-parent relationship with WindowsServerCore.
Now the developer can create three containers, one for development, one for testing, and one for production, using the CRMZ container image as the source, and all of the dependencies will be in place. Once again, no images are deployed or copied; links are used. This ensures that each container is identical and the container creation process is fast. 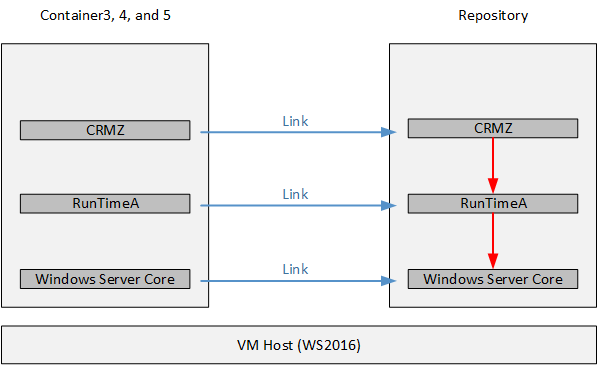 This is why Windows Server Container production deployments are going to be a rare sight for most of us, but for those with suitable services, this new deployment option will be a serious game changer.