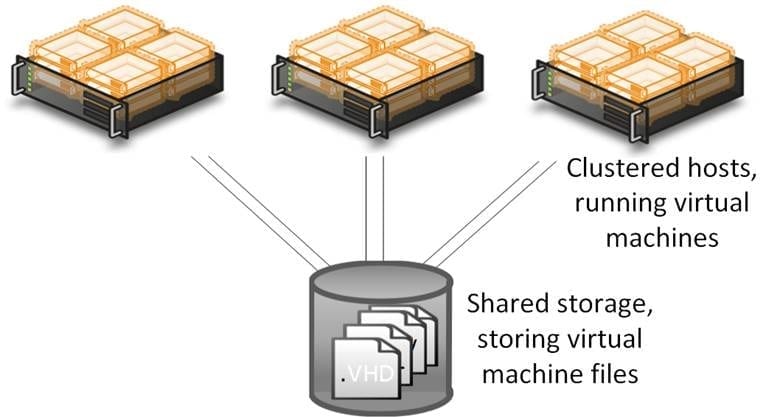 If you’ve been following along, you may recall a previous article in which I explained the role that Windows Server failover clusters play in making Hyper-V hosts highly available. In today’s article, I will explain what the requirements are for building a Windows Server 2012 /R2 Hyper-V cluster.

You will require two or more servers to function as Hyper-V hosts. Actually, that’s not strictly true. You can build a new cluster with just one server (node). That allows you to build a cluster when you are temporarily short on hardware, albeit without actually having virtual machine high availability (HA) until you add a second host.
Ideally you will use identical servers when you build the cluster. This will simplify support of the servers, of Windows Server, and of your storage solution (more on that later). However, from the Microsoft perspective, the servers need only be fairly similar.

The processors must be either all-Intel or all-AMD to allow live migration. Hyper-V does allow you to have mixed generations (functionality) of processor from the same manufacturer, but to enable live migration you must disable advanced processor features in the virtual processor settings of each virtual machine.
My advice: Keep it simple. Keep the hosts identical and get the newest processor that you can afford. Doing that will probably mean that the processor will still be available after a year when you need to add host capacity to the cluster.

Since WS2012, there is no Enterprise edition and the Standard edition can (technically) be used for the management OS of your clustered Hyper-V hosts, in addition to the Datacenter edition and the free Hyper-V Server. Due to the rules of running Windows Server in virtual machines (on any virtualization platform) you will probably use the Datacenter edition. (I am deliberately not getting into licensing in this post!)

A cluster aims to provide HA so it makes sense to build HA into the storage system. Deploy two connections between each host and the cluster storage. (Consult your storage manufacturer for guidance – in fact, that’s the common answer for many cluster design questions!) 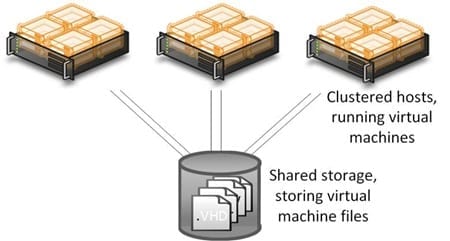 A clustered host will require a number of networks. Note that I have deliberately not said “a number of network connections.” That’s because we can converge networks into a high capacity NIC or collection of NICs:

In addition to this you might need two NICs for iSCSI (with MPIO), backup, or more if your design mandates it.
Please read my previous posts on converged networking to understand what your options are when it comes to designing the networks of a Hyper-V cluster.

Microsoft will support your design if it passes (including a warning result) the tests of the Cluster Validation Wizard in failover cluster manager. This is not enough for a reliable real-world design. Make sure that your hardware manufacturer will be happy (this is particularly pertinent for those of you using a SAN). And be sure to get the latest drivers and firmware for everything from the manufacturers; the drivers that come with Windows Server are stable enough only for getting the drivers that you really need.