Why You Should Embrace Windows 8 Apps 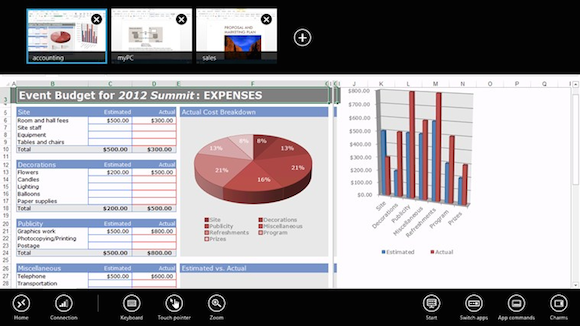 The Windows 8 Start screen and apps have been controversial leaving many desktop users wondering why they would use apps optimized for touch or ever need to see the new Start screen. Popular apps available on other platforms, such as Facebook and Instagram, were missing in action for a long time. Even the built-in Microsoft apps weren’t always what they could have been when Windows 8 first launched in October 2012.

Two major updates later (Windows 8.1, and the aptly named Windows 8.1 Update) there are new and improved apps in the store and Windows 8 is starting to look how it should have at its initial release. In this article, I’ll walk you through my transition to using Windows 8 apps and explain some of the technical reasons why you might want to adopt them.

Windows Store apps use less memory than their desktop counterparts because they can be suspended automatically after a few minutes if put into the background. This is useful when a lot of apps are open but not necessarily being used. Resume times are fast and, according to Microsoft’s guidelines, apps should take users back to the position where they left off thus providing a very responsive start while other parts of the app are reloaded.

Modern apps from the Windows Store — like Microsoft’s own Remote Desktop app, shown here — tend to be more resource-efficient than their traditional counterparts. (Source: Microsoft)

These small differences in memory management have helped me be more productive with a limited 4GB of RAM and slow mechanical hard drive which I was left with after the internal SSD cache on my notebook recently died. Reduced memory footprint also means longer battery life for portable devices.

Windows Store apps are updated automatically via a management suite such as System Center Configuration Manager (SCCM) or on vendors’ update mechanisms for each program. This is a significant departure from desktop programs, most of which need to be updated manually. Along with sandboxing (where apps run in isolation from each other and the operating system), Windows Store apps are inherently more secure than their desktop counterparts. 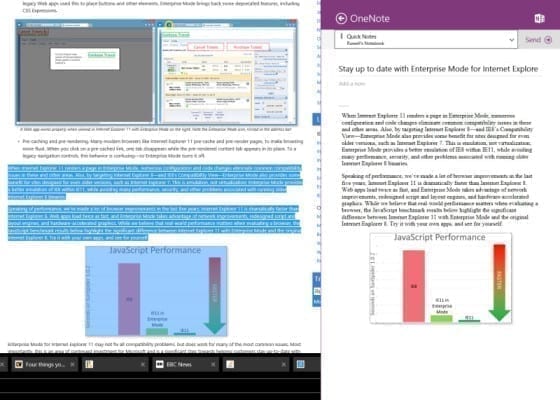 The April update included two important changes to the Windows Runtime (WinRT). Side-loaded apps, those loaded directly on Windows 8 and not distributed via the Windows Store, can now access the Windows API via web services (Network Loopback) running on the device. Apps can also call desktop libraries that have full access to the Windows API (Brokered WinRT Components).

Both these new methods allow apps to break free from the WinRT sandbox and interact with desktop applications.

The April 2014 update is also available for Windows Server 2012 R2. This means businesses providing users with apps hosted on remote and virtual desktops can also take advantage of the security and performance enhancements.

Apps as a Replacement for Desktop Programs

Internet Explorer and Outlook are the two main resource hogs on my system. I use IE for general web browsing but it also serves as an important research tool. It is not uncommon for me to have twenty or more tabs open, along with Facebook, Feedly and Hootsuite. Similarly, Outlook is an important tool but I can live without most of its functionality most of the time. So how do the built-in Email, Calendar, and app version of IE fare for everyday use?

While the Windows Store version of IE uses the same rendering engine as desktop IE, the first thing I noticed is that it’s much snappier. This is because other than Adobe Flashplayer, add-ons (which are often the culprit of IE performance problems) are not permitted. Additionally, app IE doesn’t load all tabs into memory when started making it respond faster when launched. 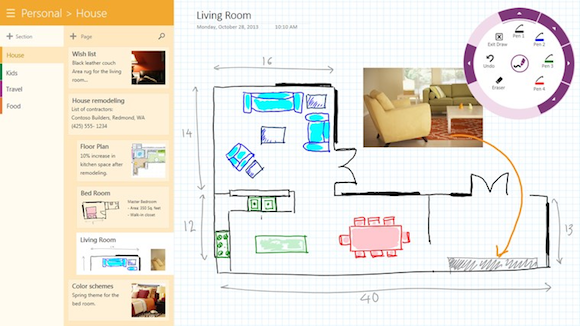 Microsoft OneNote is another Windows Store app that is faster and arguably more usable than its traditional Windows software counterparts. (Source: Microsoft)

Integration with OneNote is faster and smoother than the desktop counterparts. If I want to save a selected area of a web page for use in OneNote, clicking Share on the Charms bar causes OneNote to slide elegantly in from the right, giving me the option to send the selected area to a notebook. There is often a delay with the desktop versions of OneNote and IE during this operation, but not with the app versions and I can close the tab in IE immediately. Windows Search is also uniformly and smartly integrated into apps.

Reading List is a companion app that allows bookmarking of pages for later consumption. This enables me to keep the number of open tabs to a minimum. It also allows me to make sure only useful information gets transferred to OneNote.

Facebook has had an app for Windows 8 since October 2012 and it has improved considerably since its initial release, most notably with the ability to turn off chat. Hootsuite and Feedly don’t currently have Windows 8 apps but there are plenty of Twitter and RSS apps in the Windows Store that might prove potential alternatives. For the time being I am running Hootsuite and Feedly in IE.

Finally, the interface of app IE is cleaner and easier to manage. Due to the immersive experience that apps provide, they allow me to concentrate on the task at hand and not be distracted by other applications in the taskbar and pop-up windows.

Ninety nine percent of the time I don’t need Outlook. The built-in apps provide everything I need for basic email and calendar management with much cleaner interfaces. Both use fewer resources.

I’ve always thought that the Outlook interface is too busy. The clean lines of the Microsoft apps bring some welcome relief for the eyes. I can envisage that I might use Outlook just a couple of times a week for housekeeping or running some client-side rules I have setup.

In my short time with Windows 8 apps, I find the neat system of sliding panels and fixed areas where my apps can be positioned on the screen far easier to manage than programs in desktop windows. Apart from File Explorer and programs which are still only available in desktop flavors, I’m not sure why I’’ need to use the desktop or even what advantage it provides.

The new desktop integration features for Windows Store apps mean that I can seamlessly move between apps and desktop programs with all my commonly used apps now pinned to the taskbar which also pops-up when I move the mouse to the bottom of the screen.

Although Windows 8 apps and integration with the desktop are still not perfect I have thus far found it surprisingly useable. Here are some changes I’d like to see in the next update to Windows 8 to further improve the app experience for desktop users: