What was Microsoft Ignite 2015 Really About? 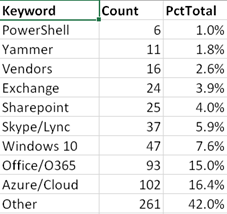 I’ve just returned from the new TechEd, also known as Microsoft Ignite, which was held in Chicago, IL. Much has already been written, tweeted or blogged about the deficiencies about catering and transportation, so I’ll skip the obvious. And you’ll find plenty of other commentary and reporting about Ignite here on Petri. Personally, after having presented at and attending a number of TechEd events over the years, I was curious about a few things.

How did Ignite work as a combined conference?

The first item is how the conference would feel as one mega-event. Attempting to cram several important events into one was going to have consequences, such as attendance. The difference between 16,000 and 23,000 people doesn’t seem that large at first but boy is it ever as is evidenced by the food quality and venue location. Although I felt the venue was wide enough, it was really tight when there were traffic bottlenecks. The conference was held on multiple floors in multiple buildings, and I’ve heard from more than one attendee that remarked on either missing or skipping sessions simply because they couldn’t make the trek in a timely manner. Logistics aside, which can always be improved, let’s talk content.

Given the event’s scope and conference consolidation, there was a lot that needed to be covered. Sadly, from a number of people I spoke with, to comments on Twitter, much of the content felt lightweight or too much like a marketing preview. I’m not saying every session was like this, nor did every attendee feel this way. I chatted with another attendee who told me she was getting a lot of great information and much more than she had ever received in the past. For her, Ignite was a terrific event. Personally, and more than one attendee felt the same way, the technical education of this event and its TechEd predecessor, has been slowly declining over the years. This year’s event made it official in my opinion. You may feel different and if so I bet I can tell why.

I decided to do an unscientific keyword analysis of published session titles. I think this is very important for this event because unlike past TechEds where speakers submitted their sessions and titles. For Ignite, Microsoft selected the speakers they wanted and then assigned them a topic. I’m sure the process varied but given the micromanagement of sessions, I can only surmise that Microsoft had some hand in crafting session titles. I know Microsoft is a big company, and I don’t mean to ascribe any nefarious intentions. But we all know TechEd over the last few years has been more of a marketing and promotional event, and Ignite is end result.
So let’s look at the words. My methodology is old-school: I simply went through the printed session guide and counted sessions based on keywords that I was interested in the session title. If a session might have spanned one or more keywords, I tended to go with the first under the assumption that was likely the more principal technology or product. In counting the sessions, I skipped exam prep sessions and labs. I am sure that some sessions covered some of my keywords, even if not in the title but since the title is designed to get your attention I decided to go with that.
By my count, I came up with 622 potential breakout sessions running Monday through Friday. The keynote is out of scope. This is the keyword list I was interested in.

The “Other” category included sessions related to Hyper-V, SQL Server, .NET, Visual Studio, and System Center. Remember, I’m primarily going on title keywords. I’m sure PowerShell was included in other sessions, but if you were looking at the listing and wondering what to see next, then this is what you had to live with.
We’ve known for some time that Azure is important to Microsoft, and this year is no different. 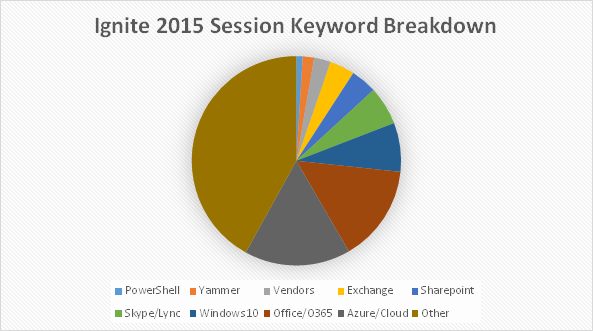 A graphical representation of the keyword analysis of all the Microsoft Ignite 2015 sessions. (Image/analysis by Jeff Hicks)

Microsoft also clearly wanted to emphasize Office products, including Office 365. If your organization is investing in the Microsoft’s cloud vision, then this was the conference for you. Likewise, messaging and collaboration was also deemed “you should be doing this” with a number of sessions around Skype for Business, Exchange, SharePoint and Yammer. If you were looking for System Center related content, then your pickings were slim.
I should point out that I counted 11 sessions that covered leading-edge technologies like Docker and Nano server so if you wanted to know where Microsoft is headed and what you should be planning for, you weren’t left out. Or you could say that Yammer alone is as important as all the new stuff. I have to assume that next year’s Ignite, assuming it retains the brand, will have more content on these technologies.

The last point I found interesting were the number of what appeared to vendor supplied sessions. Again, I’m just going by the title, but it appears Microsoft offered a number of breakout sessions to their high-value partners or exhibitors. On one hand, I find this ironic because in the past Microsoft made it a point that speakers not be promoting a product. This isn’t necessarily bad because I’m sure many of these vendors are presenting something of value or something that solves a real-problem. If you attended one of these vendor sessions, I’d love to know what you thought.
In fact, I very much would love to hear what you thought about the content in terms of its depth and range. What sessions did you think were missing? Was Ignite a valuable use of your or your company’s time and money? I know there are plenty of other reasons for wanting to attend, but for many people it is the breakout sessions that matter. Did they?