What is Azure Firewall?

In this post, I will explain what the new Azure Firewall, recently launched in preview, can do and what it cannot at this time.

There is no shortage of firewall options in Azure for network security at the transport (Layer-4) and application (Layer-7) layers of the network stack.

The foundational component is the free networks security group (NSG), providing allow/deny filtering for TCP/UDP traffic. NSG policies are deployed no matter what virtual network architecture you design, offering a low-level hard filter. In addition to NSGs, we have:

Azure doesn’t supply an alternative to the third-party NVA, but that is starting to change with a new preview release – which isn’t ready for production yet.

The Azure Firewall is a new preview network security feature in Azure, sitting at the edge of the virtual network to provide additional security beyond what is offered by NSGs. 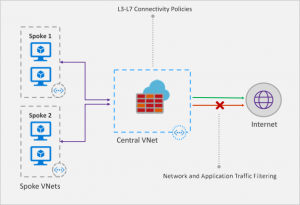 The features today are:

What Azure Firewall Cannot Do

What I first heard of Azure Firewall I thought it would replace NVAs. As it turns out, based on what the Azure Firewall is today in its preview release, it won’t. But the current preview release is a very early one, and I think Microsoft is slowly developing Azure Firewall to get it right, instead of rashly rolling out a bunch of unready features. So, I kind of understand what they are doing.
Today the Azure Firewall is not a solution for protecting a network against inbound threats. You cannot set up NAT rules for inbound traffic. It does not have rules or filters for publishing internal applications either. Today, Azure Firewall only cares about outbound traffic.
There are also a number of known issues with:

Azure Firewall is an early preview and is not ready for production. But if the future of Azure Firewall interests you, you should enroll in the preview, deploy it in a test environment, and share your feedback with Microsoft.