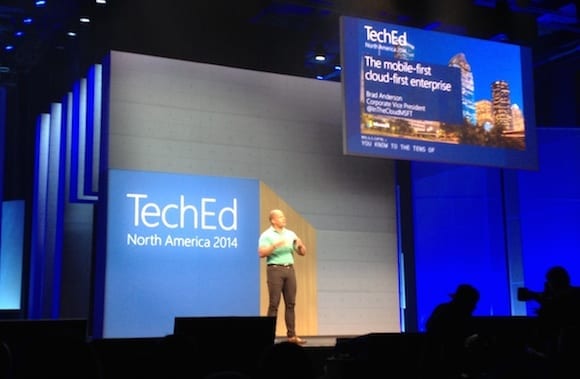 Microsoft Corporate Vice President Brad Anderson outlined Microsoft’s latest efforts on their “mobile first, cloud first” vision for IT services during his conference keynote at TechEd 2014 in Houston, TX, this morning. The new Microsoft mobile and cloud push was articulated by new Microsoft CEO Satya Nadella when he assumed the helm of the software giant earlier this year, saying then that “Microsoft is focused on that magical intersection where mobile and the cloud come together.” While it’s true that Microsoft has been working in the cloud and mobile spaces for years, Nadella has sought to sharpen Microsoft’s corporate focus on embracing those twin (and complimentary) technologies.

Anderson’s keynote — which was a considerably more understated affair than his Aston Martin-fueled address at TechEd 2013 — underscored that new cloud and mobile push, with dozens of new features, tools, and services that help IT professionals more readily embrace the cloud and the bring your own device (BYOD) trend. Most of today’s announcements dealt with improvements to Microsoft Azure and Microsoft’s hybrid cloud efforts, enhanced cloud and data security, and a greater push towards empowering IT to more effectively provision, manage, and secure mobile devices. I’ll touch on the announcements briefly below, but look for more detailed articles on the Petri IT Knowledgebase covering all these topics in the days and weeks to come.

Microsoft see the intersection between public, private, and hosted clouds as a fundamental element of their cloud strategy, and several of the announcements today focused on giving IT professionals more tools to manage these multi-cloud resources.

Many organizations are concerned about sending confidential corporate data to and from the cloud, and that concern has kept some organizations on the cloud sidelines. Microsoft seeks to address that concern with Azure ExpressRoute, which effectively allows Azure customers to create more secure private connections between their own data centers and Microsoft Azure. Petri IT Knowledgebase Contributing Editor Aidan Finn has written about how Microsoft has been busy signing ExpressRoute partners, which reads like a who’s-who of telecommunications providers.

One area of improvement for Azure that Microsoft has invested considerable time and effort in is caching, particularly on the form of the Azure Managed Cache Service (now generally available) and the Azure Redis Cache Service (which is now available in public preview).
Azure Managed Cache is a cloud-based cache that is created by using the Azure Cache Service and is managed by Microsoft. Any application running in Azure can use it, and it can improve read performance of any service that uses it. It’s particularly useful if you’re looking for the speed improvements a cache can bring without the time and expense of having to manage it yourself.
Like Azure Managed Cache, the Azure Redis Cache Service is also managed by Microsoft, but it’s based on the open source Redis Cache, which — according to Pivotal, the official sponsor of the Redis open source project — is a in-memory cache that “…keeps all your data quickly accessible in memory, giving your applications the ability to read and write data faster than ever before. ”

As a cloud service, Microsoft Azure is updated and tweaked on a much more aggressive cadence than traditional “boxed” software is. Microsoft announced a number of improvements to Azure at TechEd, including support for more robust compute-intensive A8 and A9 virtual machines, which support up to 8 cores and 56GB of RAM and 16 cores and 112 GB of RAM, respectively. These Azure VMs are also include a 40 Gbit/s Infiniband network for enhanced virtual network performance as well.

More improvements also were announced on the virtual networking side of things, including Multiple Site-to-Site and Inter VNET (VNET-to-VNET) Connectivity. In essence, this upgrade allows several virtual networks to inter-connect, which specifically should help organizations that require a cloud presence in multiple geographic locations. My colleague Aidan Finn will be posting some more in-depth articles on the latest networking and performance improvements, and I’ll link to them when they’re posted.

One of the biggest stumbling blocks for many IT professionals and the cloud is the perception that data in the cloud is more vulnerable to theft or inadvertent public exposure. Microsoft is working towards alleviating business concerns in the area, and they’re doing so by adding a number of security improvements to Azure, including a new Azure Site Recovery service (which replaces Hyper-V site recovery manager) and enhanced anti-malware protection for Azure VMs.

During the TechEd 2014 keynote, Microsoft’s Matt McSpirit said that improved HA and backup services in Azure were among the most frequently requested improvements to Microsoft Azure. The result of that feedback was the development of Microsoft Azure Site Recovery, which is the updated version of Microsoft Azure Hyper-V Recovery Manager. This updated service allows VMs to be replicated from an on-premise environment up into Microsoft Azure, but there is a caveat: Azure Site Recovery requires Microsoft System Center Virtual Machine Manager, causing a colleague to remark that “What could have been a killer Azure feature for the SMB market now loses its luster because of that SCVMM requirement.”

Another new Azure feature that security-minded IT professionals should find useful are the new anti-malware protection features. Microsoft now allows optional anti-malware agents from Symantec, TrendMicro, and Microsoft to be enabled at the start of every VM, which lessens the overhead of trying to configure anti-malware protection separately. Microsoft has also entered into an agreement with Barracuda Networks to embed their Barracuda web application firewall (WAF) into Azure VMs, which is yet another step towards improving security and lessening IT staff workloads.

Microsoft’s cloud-first, mobile-first strategy obviously wouldn’t be complete without an equal number of mobile announcements, and there were several upgrades announced during the TechEd keynote. We’ll cover more of those improvements and additions in the near future, but in this post I’ll focus on arguably two of the most significant: Numerous updates to Windows Intune and the new Windows RemoteApp feature.

Some of the most noteworthy upgrades announced during the keynote revolved around Windows Intune, Microsoft’s cloud-based management service. Two of the most impressive updates include the ability to manage Microsoft’s Office apps for Android and iOS devices, and an app encapsulation tool that will allow administrators to envelop apps in policy restrictions that govern how users access the apps and Android and iOS devices.

Arguably one of the most exciting things introduced during the keynote was Azure RemoteApp. Azure RemoteApp, in essence, delivers Windows applications as a cloud service, accessible from anywhere on a huge variety of clients, including iOS, Android, Windows, and MacOS devices. Microsoft’s Samin Erdogan posted more details about Azure RemoteApp on the fficial Microsoft Remote Desktop Services Blog:

So what did you think of the TechEd keynote this year? Drop me an email or touch base with me on Twitter, Google+, or Facebook (see below).