An Intro to System Center Advisor

System Center Advisor helps prevent downtime by giving you access to Microsoft’s considerable customer support experience, which is made available through the Windows Azure cloud-based service. This service applies the following common questions from the Microsoft customer support checklist to all servers that Advisor monitors.

Because Advisor is a cloud-based service, Microsoft constantly updates the knowledge that is provided to the service. Microsoft product support teams can identify new recurring issues and immediately update the Advisor knowledge and content data. This is used to assess other business servers and provide them with advance notification of a potential problem in their configuration, thereby giving them time to resolve the issue before it occurs within their infrastructure.

The System Center Advisor environment consists of the following components. 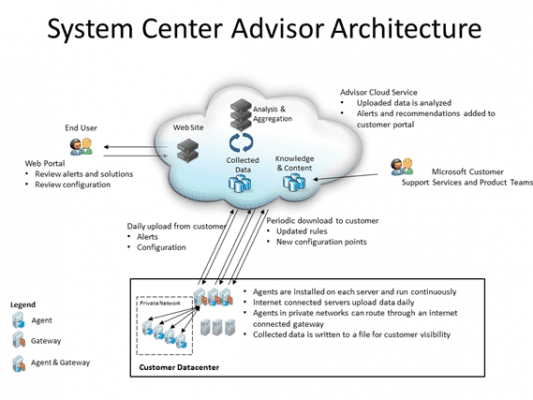 You have nothing to loose, surf over to the service landing page, and get started NOW!