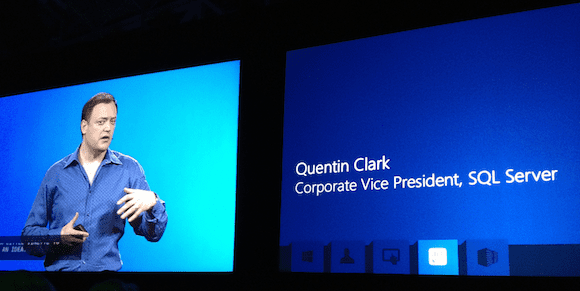 Microsoft first announced SQL Server 2014 at TechEd 2013, along with a slew of other significant upgrades and announcements for products and services from their Cloud and Enterprise group. That news also included taking the wraps off Windows Server 2012 R2, System Center 2012 R2, and alluding to forthcoming updates in Windows Intune. Of special interest to database administrators is SQL Server 2014, which boasts a host of new updates and improvements.

The latest release of SQL Server has hundreds of new improvements, performance tweaks, and bug fixes. Microsoft has published a fairly comprehensive list of SQL Server 2014 features on MSDN, but I’ll highlight the features that will likely have the biggest impact on SQL Server DBAs and IT organizations. 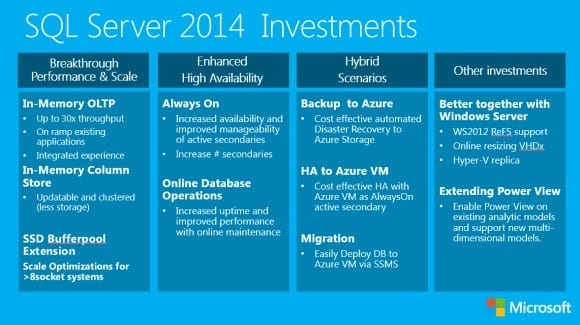 A major theme of Microsoft products being updated at TechEd 2013 has been improved cloud integration, and SQL Server 2014 is no exception. According to Clark, this new release will include simplified and enhanced tools to support the migration of workload to Windows Azure virtual machines, as well as streamlined and simplified backup and recovery of database to cloud services.

The ‘AlwaysOn’ high availability features introduced in SQL Server 2012 will also carry through to SQL Server 2014, but they’re getting significantly enhanced with support for new usage types and large deployment scenarios. If you’re unfamiliar with AlwaysOn, Microsoft has a nice overview of AlwaysOn Availability Groups on MSDN.

One of the most impressive new features of SQL Server 2014 is the arrival of the ‘Hekaton’ online transaction processing (OLTP) engine, which is a high-performance database technology — developed jointly between Microsoft research and the Microsoft SQL Server team — where the data and database engine reside in memory and are optimized to operate as such. Paul Larson of Microsoft Research was quoted describing the basics oh Hekaton in a Microsoft Research blog post on Hekaton in late 2012. Here’s an excerpt:

“In traditional models, the assumption is that data lives on disk and is stored on disk pages,” Larson explains. “This creates a lot of overhead when you try to access records. When data lives totally in memory, we can use much, much simpler data structures. Hekaton’s index data structures and storage structures are optimized on the basis that when a table is declared memory-optimized, all of its records live in memory.”

According to Microsoft, employing the Hekaton database engine can result in jaw-dropping performance gains, with Microsoft’s Janie Chang claiming that Microsoft Partner bwin managed to see transaction throughput increased by a factor of 10. During the Microsoft TechED 2013 keynote address, Clark said that the Hekaton in-memory OLTP would ship as standard with SQL Server 2014.

March 2014 Update: Microsoft has released additional information about the performance improvements some use cases can receive from using in-memory OLTP in SQL Server 2014, as shown in the visual below. 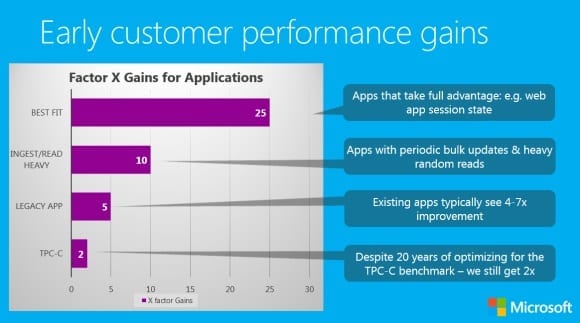 The In-Memory OLTP feature in SQL Server 2014 can result in some impressive performance gains for some applications (Source: Kevin Liu/Microsoft) 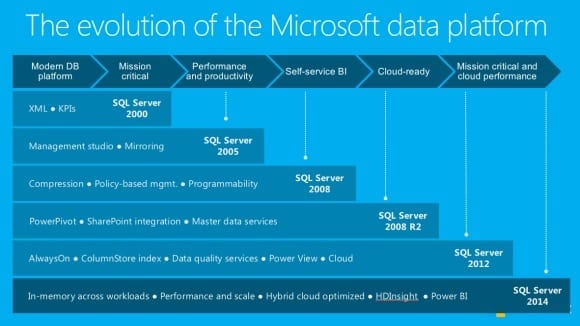 Looking forward to SQL Server 2014? Drop me an email and tell me what you think. You can also reach out to me on Google+ or on Twitter.