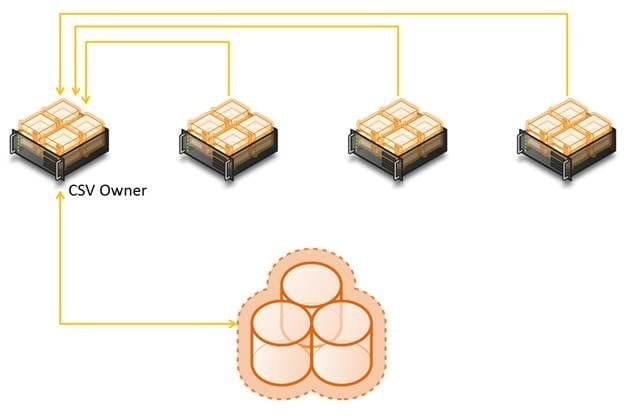 What Is Redirected I/O?

Windows has a “shared nothing” approach to volumes. Any one volume can be owned by just a single machine. This could be a problem when trying to create a cluster file system. CSV was introduced in W2008 R2 to allow the nodes in a Hyper-V cluster share a volume and simply storage design. Shared nothing still applied – one node in the cluster is the owner or Cluster Shared Volumes coordinator of that volume. This is a fault-tolerant role that is managed for you by the cluster.
Normally each node in a cluster has direct I/O to a CSV (delegated by the owner) on the SAN. But there are scenarios in which the traditional shared nothing approach must be restored. This causes something known as redirected I/O to occur. Each node must continue to use the storage (virtual machines must continue to operate) but the I/O must be controlled by the CSV’s owner. To make this possible, each node that is not the CSV owner temporarily starts sending/receiving all storage traffic to the SAN via the CSV owner. This traffic traverses the private networking of the cluster. 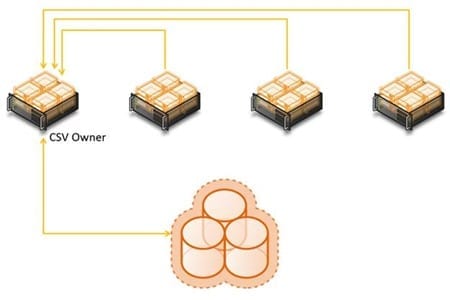 Non-owner nodes redirecting I/O to the Cluster Shared Volumes via a CSV owner.

Redirected I/O obviously is slower than direct I/O. And redirected I/O had severe effects on storage performance for multi-site or stretch clusters.

Redirected I/O had three reasons to exist in W2008 R2.

Thankfully, CSV in WS2012 (known as CSV 2.0) simplified backup operations so that redirected I/O is no longer required for backup operations. That leaves us with the very infrequent and brief metadata operations, and the (very helpful) storage path fault tolerance solution.

Just to be clear, redirected I/O is no longer required to back up a Cluster Shared Volume since WS2012. There are, however, some other significant changes that are not well known.

Another change to redirected I/O improves the performance of storage path fault tolerance. Block-level redirected I/O avoids sending storage traffic through the storage stack twice: on the non-owner node and on the CSV owner node. This requires no configuration. 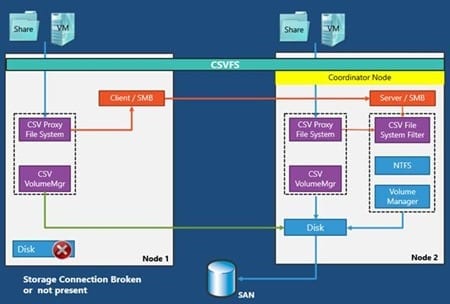 There are two essential things to remember when deploying CSV on WS2012, not just for Hyper-V, but also for other clusters such as the Scale-Out File Server.