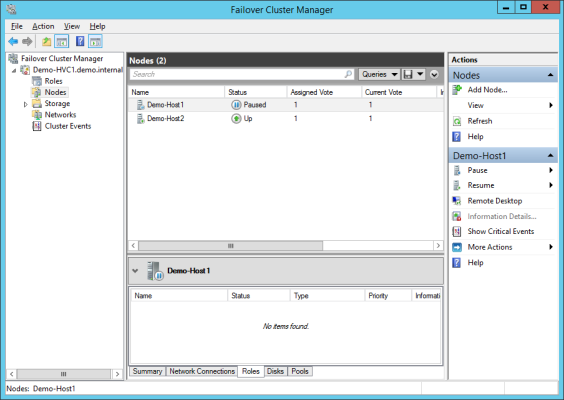 A lot of time has passed since Microsoft’s Wolfpack technology, the very crude failover clustering that was introduced in Windows NT Server 4.0, Enterprise Edition in 1997. These days, we primarily use Windows Server Failover Clustering to create Hyper-V clusters to host highly available virtual machines instead of services. That means we have many more highly available roles running on much bigger clusters, and we needed to change how to work with the nodes in a cluster.

Up until Windows Server 2008, clustering was a rough and specialized field. Since then the corners have been rounded, administration has become easier, and Failover Clustering is a necessary skill for anyone working with Microsoft virtualization.

Pausing a Host in a Failover Cluster

The pause action of a Failover Cluster builds upon queued Live Migration. You can select a node in a cluster and pause it by opening Failover Cluster Manager, browsing into Nodes, right-clicking the node, and selecting Pause. There are two ways to pause a node:

The Pause action is a Hyper-V administrator’s friend. You can plan some kind of maintenance, such as patching or hardware repairs, and move virtual machines with no perceivable downtime to other hosts in the cluster. The host moves into a paused state and is temporarily out of the cluster and you are free to work on that node without impacting services.

Note that System Center Virtual Machine Manager will issue a warning because this action is “out of band” in the view of System Center.

Shutting Down a Host in Windows Server 2012 R2

Microsoft prevented a lot of helpdesk calls when they changed this behavior in WS2012 R2. Now when you shut down a host, any virtual machines on that host will be automatically moved to other hosts in the cluster using the drain action.