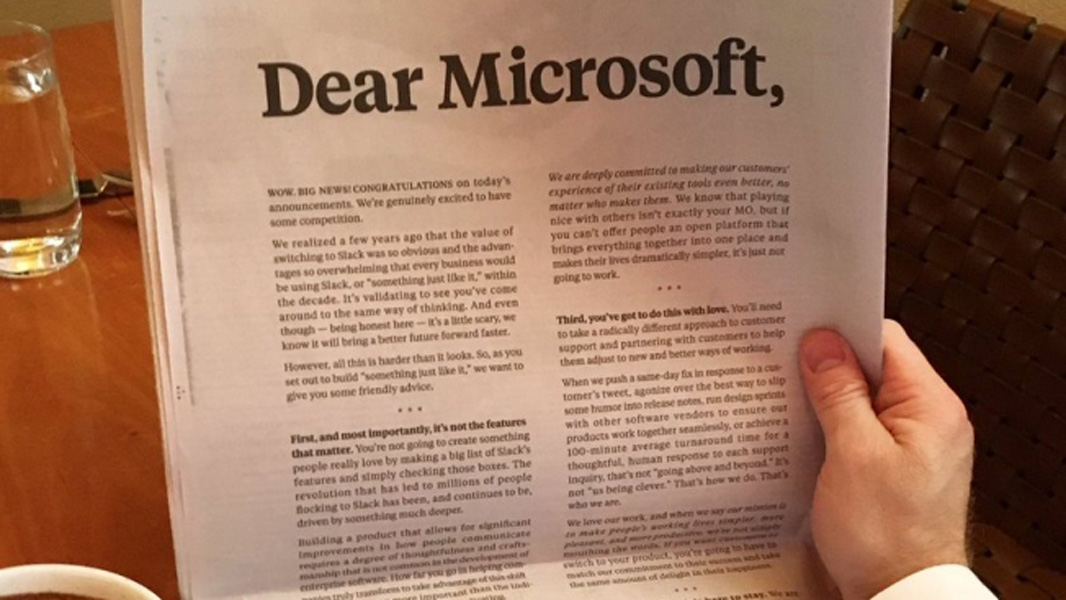 Because queso tater tots are the perfect food, this edition of Short Takes focuses on Steve Ballmer’s falling out with Bill Gates, Slack’s stupid Microsoft ad, Microsoft’s Edge failures, and so much more.

In an interview with Bloomberg, former Microsoft CEO Steve Ballmer says that things went so badly with Windows phone that it actually impacted his relationship with long-time friend Bill Gates. “[Bill and I had] a fundamental disagreement about how important it was to be in the hardware business,” he says. “I had pushed [for] Surface, [but] the board had been a little reluctant in supporting it, and things came to a climax about what to do about the phone business … We should have been in the hardware business sooner, in the phone case, and we were still suffering what I would call some of the effects of our Vista release of Windows.” Ballmer still defended his decision to purchase Nokia, however, and that was an unmitigated disaster that Microsoft is still extricating itself from. “If executed in a certain way it made a lot of sense,” he says. “The company chose to go another direction [after I left] and that’s the decision the company made.” That direction was about $10 billion in write-offs, and a complete retreat from the smartphone market. Ah well.

“Here we go again: Microsoft’s popping up ads from the Windows 10 toolbar”

What was that phrase again? Oh, right. You’re the customer, not the product.

On the day that Microsoft announced its Slack-like Microsoft Teams offering for Office 365 subscribers, Slack actually took out a one-page ad in The New York Times. This is funny for a number of reasons, the most obvious being that a hip and trendy online service actually advertised something on paper. But this crazy ad also harkens back to Apple’s ill-advised “Welcome, IBM. Seriously.” ad from the early 1980’s, when IBM released its first PC. And it suggests that hip and trendy Slack maybe doesn’t understand the lessons of history. And it goes like this. Don’t poke the bear, you freaking idiots. And do a bit of research for crying out loud.

“Microsoft’s HoloLens could power tanks on a battlefield”

Anyone else trust that? No? Good.

With Internet Explorer usage plummeting in recent years, Microsoft called a mulligan and provided a modern new web browser called Edge in Windows 10. It hasn’t helped: The latest usage statistics from the reliable NetMarketShare show that Google Chrome usage has only grown since the release of Edge, and that browser now controls 55 percent of all web browser usage. Internet Explorer usage, meanwhile, has halved this year, and IE now sits at 23 percent of all usage. As for Edge, that seems to be flatlining right above 5 percent. Granted, that’s still enough to beat out Mac-only Safari, which controls just 3.7 percent of usage. But as Computerworld points out, this means Microsoft browsers have lost over 330 million users this year alone. The lesson? It may be that Microsoft needs to pick its battle wisely, and that consumers are smart enough to choose the best solutions.

“Why Microsoft’s ‘Xbox Scorpio’ Will Be The Most Advanced Console Ever Made?”

Are you asking us or telling us?

Android is closing in on 90 percent marketshare

Just in case there was some doubt about whether Android is the new Windows, consider this figure: According to Strategy Analytics, which, to be fair, is not my go-to choice for this kind of data, Google’s Android now controls 88 percent of the smartphone market, a record. And it comes on strong growth of 10 percent, whereas as iPhone share has fallen 5 percent in the same time frame. It could be worse, of course: Windows phone has been knocked into the “Others” category because it has “all but disappeared.”

“How to track down the Startup folder in Windows 10”

This week, it’s in Brazil!

And, go figure, they’re not fans of the ruling. In its response Thursday to the EU’s sweeping condemnation of its anti-competitive behavior, Google suggested that perhaps the pan-European government doesn’t quite “get” the Internet. “We disagree with the European Commission’s argument that our improved Google Shopping results are harming competition,” Google general counsel Kent Walker explains. “We believe these claims are wrong as a matter of fact, law, and economics.” If history is any guide, and I think it is, Google is in for a long fight, some billions of euros in fines, and then a slap on the wrist that will do nothing to change its dominance online. So, we can just sit back and enjoy that as it happens, I guess.

So maybe future iPhones will bend. You know, on purpose.

New MacBook Pro is fastest-selling either

Apple’s new MacBook Pro has come under fire for not being “Pro” enough. Key among the complaints is the 16 GB RAM limit (down from 32 GB), the lack of an SD card slot for photographers, the year-old CPU and chipset, the lack of a real ESC key and more. But the truth is in the numbers. And as it turns out, this new MacBook Pro is the fastest-selling MacBook Pro that Apple has ever made. “So far our online store has had more orders for the new MacBook Pro than any other pro notebook before,” Apple SVP Phil “he puts the shill in” Schiller said in a recent interview. “So there certainly are a lot of people as excited as we are about it.” Let me put them in non-marketing speak. “Suck it, haters.”